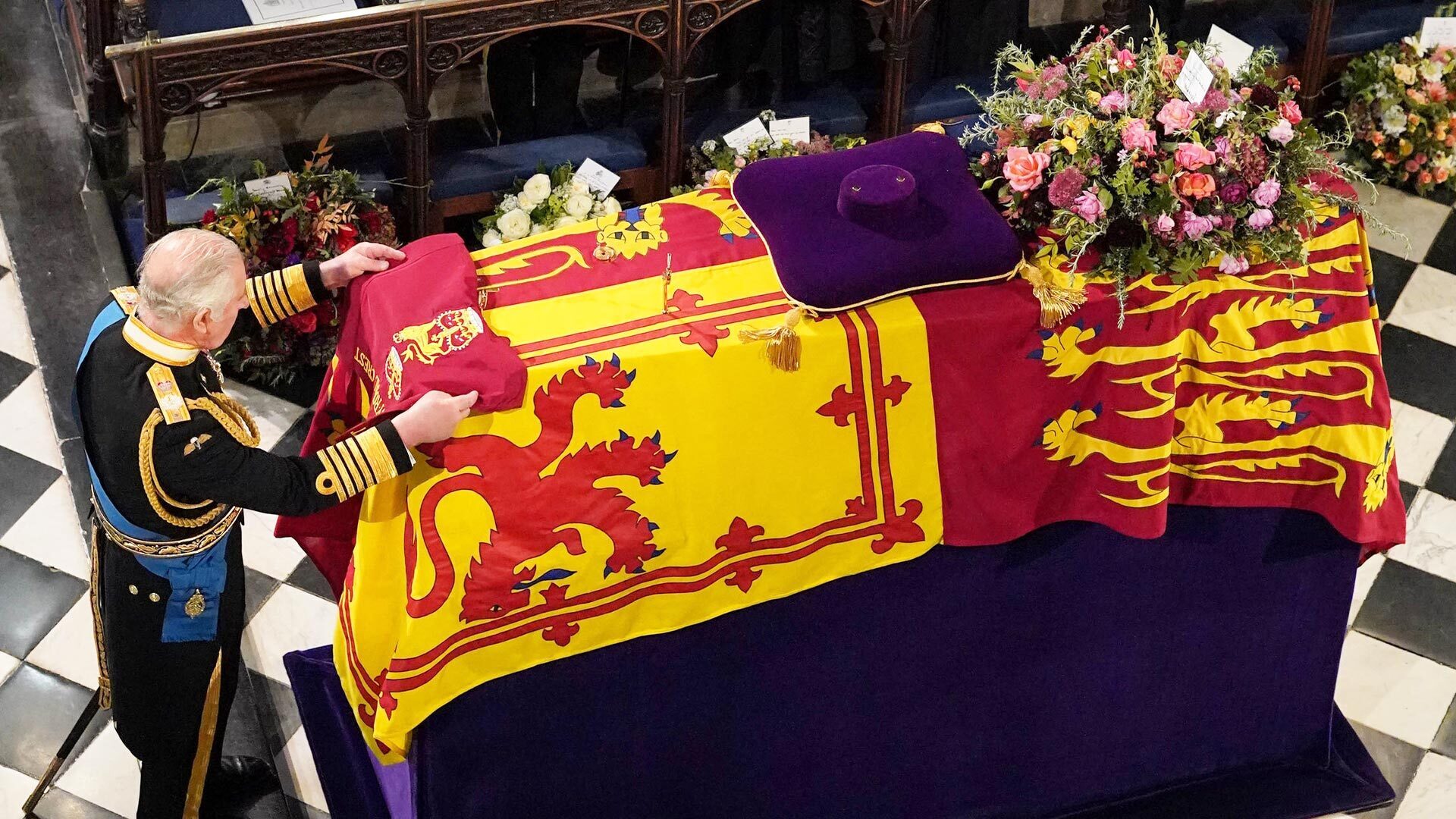 BRITAIN and the World said farewell to the Queen yesterday in a funeral the like of which has never been seen before and will never be seen again.

On a day of spectacular grandeur and intense emotion, a million people lined the route from London to Windsor — while an estimated four billion will make it the most-watched TV event.

After the pomp and ceremony of the State funeral at Westminster Abbey, Britain’s longest-reigning monarch, at 70 years, was finally reunited with her husband and “strength and stay” Philip during a poignant committal service in St George’s Chapel, Windsor.

She was also buried with the Queen Mother, her father George VI and sister Margaret.

Last night the Royal Family’s Twitter account released a 1947 photo of the Queen and Philip alongside her parents and sister in the Blue Drawing Room at Buckingham Palace.

Hours earlier, the world witnessed a sombre and symbolic moment at the Queen’s committal as the instruments of state — the Imperial state crown, and the orb and sceptre — were removed from her coffin and placed on three purple velvet cushions.

The objects were received by the Dean of Windsor from the Queen’s Bargemaster and a Sergeant of Arms and placed on the High Altar.

A tearful King Charles then lovingly folded the Queen’s Company camp colour and placed it on his mother’s ­coffin to be buried with her.

The Lord Chamberlain — the most senior member of the Royal Household — symbolically broke his Wand of Office, once used to discipline rowdy courtiers, and placed it alongside her colours.

Her Majesty’s coffin was then gently lowered 16ft into the Royal Vault to be alongside her husband and consort of 73 years.

The royal couple, who married in 1947, were later buried in their final resting place during a private ceremony.

After up to a million mourners had paid their respects to the late monarch along the 21-mile route from London to Windsor yesterday afternoon, the simple committal service was attended by close family and members of the Queen’s household staff.

The powerful act mirrored the Queen’s coronation in 1953 when the crown, sceptre and orb were taken from the altar in Westminster Abbey and given to the monarch to mark the start of her reign.

Up to 400,000 had attended her Lying-in-State until yesterday morning — part of ten days of official mourning since her death at Balmoral on September 8.

The world said goodbye for the final time as she was slowly ­lowered into the vault, watched in the quire by her ­sorrowful children, grandchildren and great-grandchildren.

The Queen’s coffin had been brought to the chapel, which was completed by Henry VIII in 1528, along Windsor’s Long Walk which was crammed with mourners.

The drive up to the castle from Cambridge Gate had been bordered with thousands of flowers which well-wishers had brought to the royal residence since the Queen’s death.

The Queen’s favourite Fell pony, Emma, was brought out to watch the procession go past as a touching tribute to the monarch’s love of horses.

Two of her corgis, Sandy and Muick, were given a chance to say goodbye to their late owner when they were brought out inside the George IV gate as Her Majesty’s coffin passed.

King Charles III led the Royal Family as the procession reached the Quadrangle alongside his siblings Anne, the Princess Royal, Andrew, the Duke of York, and Edward, Earl of Wessex.

Behind them, Princes William and Harry were united in grief for their grandmother alongside their cousin Peter Phillips.

As the State Hearse reached the Horseshoe Cloister, the bearer party was waiting to lift the coffin up the West Steps into the chapel.

The Royal Family followed as Her Majesty made her last journey, and the choir, conducted by James Vivian, sang Psalm 121.

In their final act of duty to their sovereign, the Queen’s Company, who acted as her pallbearers, placed the coffin on a catafalque draped in purple velvet.

The congregation of around 800 people, including Her Majesty’s Household past and present with personal staff who work, or who have worked, on the private estates, had been gathering inside the chapel from 1pm.

Prince George, nine, and Princess Charlotte, seven, joined their parents the Prince and Princess of Wales as they took their seats in the 1,000-year-old quire for the committal service, starting just after 4pm.

The youngest sibling, four-year-old Louis, was not among the mourners yesterday.

Arrangements of white flowers were placed inside the chapel containing lilies, bouvardia, dahlias, lisianthus, roses, eucalyptus, and other greenery picked from Home Park.

Music heard during the service was composed by Sir William Henry Harris, who is believed to have taught the young Princess Elizabeth to play the piano.

He served as the Organist of St George’s Chapel between 1933 and 1961, throughout much of the Queen’s ­childhood.

She often visited the Organ Loft to watch him play, especially during Christmas services.

The choices for the committal service had been decided by Her Majesty, apart from the final hymn, which she left to be chosen after her death.

Christ Is Made the Sure Foundation was chosen by King Charles and the Dean of Windsor in the days after she passed away.

The Dean read Psalm 103, 13-17, including the traditional line “Go forth upon thy journey from this world, O Christian soul” as the oak coffin slowly disappeared out of sight into the vault.

King Charles III, with the Queen Consort Camilla at his side, had tears in his eyes as his beloved mother was laid to rest in the simple farewell.

The Queen’s piper played a haunting lament, A Salute to the Royal Fendersmith from the North Quire Aisle, out of sight of the congregation.

Justin Welby, the Archbishop of Canterbury, then gave the blessing to the chapel before the National Anthem — God Save The King — was sung.

During the private interment service yesterday evening, the Queen and Prince Philip — who in 2007 celebrated their 60th wedding anniversary — were buried in the King George VI Memorial Chapel.

In the final farewell, King Charles scattered earth upon his mother’s coffin, as the late Queen did for her father, George VI.