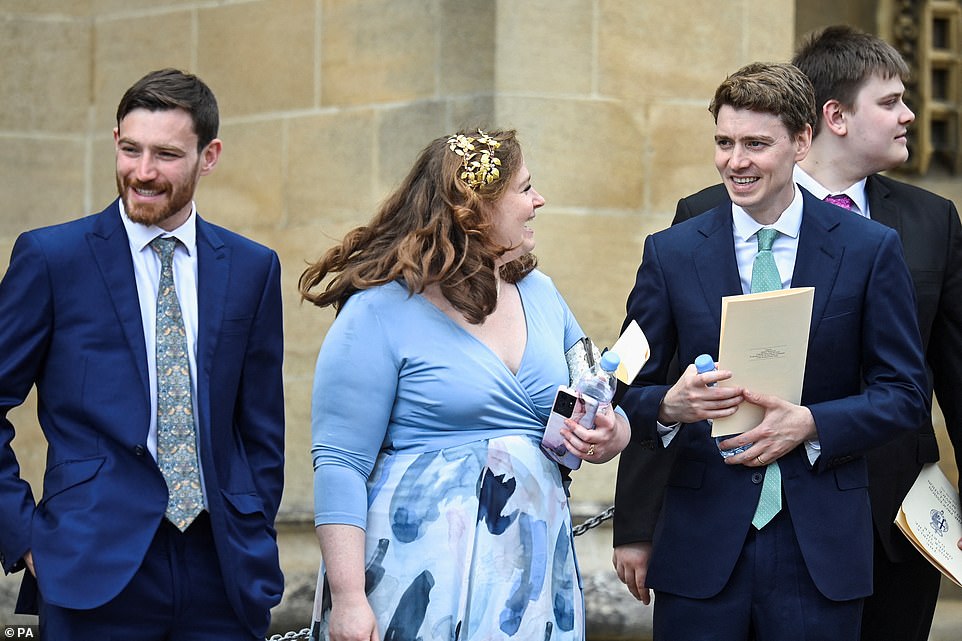 Sir Tony Blair‘s children were reunited in public as he was knighted at Windsor Castle yesterday.

Sir Tony, who was Labour prime minister between 1997 and 2007, was appointed a Knight Companion of the Most Noble Order of the Garter, the oldest and most senior British Order of Chivalry.

His wife Cherie Blair was embraced their daughter Kathryn, who had taken off her shoes ahead of the ceremony in St George’s Chapel. Also there was eldest son Euan Blair – now 38 years old and firmly on his way to becoming a billionaire with an estimated net worth of more than £330million due to his tech business and property portfolio.

Middle child Nicky, a 36-year-old football agent, and youngest born Leo, 22, a student who was born during Blair’s time in Number 10 were also there to support their father.

The knighthood prompted a noisy protest outside the castle walls by around 150 Stop the War activists who chanted ‘Tony Blair war criminal’.

Earlier this year more than 1.5 million signatures were gathered on a petition calling for the knighthood to be ‘rescinded’, claiming he was the ‘least deserving person of any public honour’ and that he should be ‘held accountable for war crimes‘.

The picture is one of the first times the Blair clan have been pictured all together in public since leaving Downing Street in 2007.

The former Labour Prime Minister’s wife Cherie Blair was seen embracing daughter Kathryn ahead of the ceremony in St. Georges’s Chapel, at Windsor Castle. Included in the picture was eldest son Euan Blair – now 38 years old and firmly on his way to becoming a billionaire. Middle child Nicky, a 36-year-old football agent, and youngest Leo, 21, who was born during Blair’s time in Number 10 were also present

Nicky, Kathryn and Euan Blair at Windsor to support their father as he became Sir Tony Blair. Kathryn took her shoes off

Sir Tony Blair’s family were out in force as he took part in his first Garter Parade at Windsor Castle. Wife Cheri and children Euan Blair, Leo Blair, Nicholas Blair, Kathryn Blair watched with pride from the sidelines

The picture is one of the first times the Blair clan have been pictured all together in public since leaving Downing Street in 2007. Pictured: The Blairs in 2005 outside Downing Street

As a young boy, Euan was occasionally photographed outside the steps of Downing Street with his mother, father and siblings Nicholas and Kathryn (all pictured). His youngest brother, Leo, was born in 2000

The appearance of the Blair children comes just days after it was revealed eldest son Euan, 38, was on course to become a billionaire with his education tech-start up.

Last week it was revealed how the former Prime Minister’s son had seen his tech firm’s valuation double in eight months to £1.35 billion after securing £175 million in funding for Multiverse.

The 38-year-old’s personal stake in the ‘EdTech’ company, which aims to get young people into apprenticeships, is believed to be worth around £380million.

It comes 22 years after his unfortunate brush with the law, when he was arrested as a teenager for being drunk after a night out in London celebrating his GCSE results.

The 16-year-old Euan Blair made a public apology in 2000, backed by his Prime Minister father, following the police reprimand.

Then he got an M.A. in International Relations with a £50,000 scholarship at Yale University, it was reported by the Daily Mail in 2008, but claims higher education taught him ‘nothing’ that proved useful.

He said: ‘[Graduates and him] had no divine right to be there… it was a consequence of a system that was obsessed with using academics, with all the latent biases and problems inherent in that, to select people.’

Euan also joined the world of investment banking, with a graduate job at Morgan Stanley and was reported to be a runner in the film V for Vendetta.

The chief executive, who bought himself a £22million mansion last month, founded the business just six years ago and in the last eight months it has doubled its previous valuation of £700million.

The company works with more than 500 employers to get students from underrepresented backgrounds into professional services through apprenticeships.

Euan was recently awarded an MBE for services to education in the Queen’s birthday honours list, six months after his father was awarded a controversial knighthood.

The father-of-one was introduced to his wife by former defence secretary Geoff Hoon while she was on work experience.

Suzanne Ashman, the daughter of motor racing entrepreneur Jonathan Ashman, married Euan in 2013 after seven years together. She is now a partner at venture capital firm Local Globe.

In 2017, at the age of 29, his wife was listed as a prominent European financier on prestigious business publication Forbes’s 30 under 30 list.

Euan Blair’s education company Multiverse is now valued at £1.35billion, and it’s understood the Blairs’ eldest child has a stake of between 25  and 50 per cent of the business

Euan is not the only successful Blair child, with all of them millionaires through property alone after their parents gave them a leg up on to the property ladder.

He is licenced by Fifa and co-founded Magnitude Brazil Sports limited, based in Rio de Janeiro, in 2011.

It is thought they signed up a number of young South American players with a view to cashing in if the youngsters make it big in Europe.

And that plan appeared to work after Nicky reportedly made a massive sum from brokering the £6.7million transfer of Mexican midfielder Hector Herrera to Porto FC in 2013.

Nicky could reportedly earn around 10% of any fee given to the player as well as a cut of his future earnings, adding to his growing empire.

It is thought mother Cherie is supportive of the venture and has allowed her son to use a desk at her business in central London.

Nicky Blair, pictured with his mum, is a football agent and gave his parents their first grandchild

Nicky, pictured furthest right, is licenced by Fifa and co-founded Magnitude Brazil Sports limited, based in Rio de Janeiro, in 2011.

Younger sister Kathryn, 34, has gone into law, also like her parents, and worked for the same inn of court her parents Tony and Cherie joined in the 1970s.

The family law barrister now represents clients with New Court Chambers after being called up to the bar in 2012 after graduating from King’s College London. She later read at the College of Law and completed a diploma in Forensic Medical Sciences.

Earlier this year The Mail on Sunday revealed Kathryn raked in a tidy £700,000 for the family coffers after selling a one-bedroom mews house in central London for £1.9million.

Prices in the area have climbed by an average of 43 per cent in that period, but the Blairs carried out renovations, planning documents reveal. A basement extension and enclosed courtyard were added by the family.

The house was one of nearly 40 properties owned by the former Labour Prime Minister, his wife and their four adult children.

In 2018, her bid to add a single-storey extension to the house, which is in a conservation area, was branded ‘thoughtless vandalism’.

Despite opposition, the plan was ultimately approved.

Leo, who was the first child born to a serving Prime Minister in over 150 years in 2000, is said to be ‘musically gifted’ and interested in politics.

Little is known about the Oxford University student, but he has been pictured at major events with his mother, Cherie, in recent years.

The Blair’s youngest child Leo is also a Labour party member, having joined when Jeremy Corbyn was leader.

All of them have been helped on to the property ladder by their parents, who have a £37million property empire.

Leo Blair (centre), the youngest son of former British Prime Minister Tony Blair, and Cherie Blair (right), listen to Mr Blair during a speech to mark the 120th anniversary of the founding of the Labour party in February