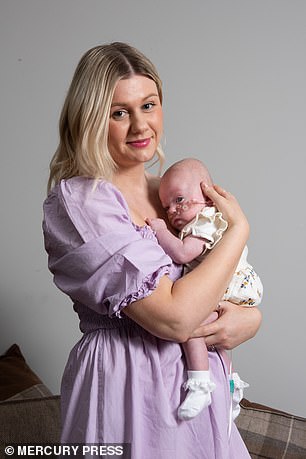 Amy Dutton alongside Elsie, now back at home thanks to the healing power of cuddles

An extremely premature baby — born three days before the UK’s legal abortion limit — was saved by her mother’s cuddles.

Elsie Dutton was delivered after 23 weeks and four days, weighing 1lb 2oz — slightly more than a tin of baked beans.

Doctors feared Elsie, whose twin, Dotty, died in the womb, would not survive and whisked her off to an incubator.

But she has now ‘defied all the odds’ and escaped her ordeal with ‘no issues’, which medics claim is all down to her mother Amy’s ‘kangaroo care’.

Mrs Dutton, of Barnsley, wasn’t allowed to hold Elsie whilst her daughter was fighting for her life on an incubator.

Scott and Amy Dutton have waited five months to bring their newborn baby Elsie back to their home in Barnsley, South Yorks

Elsie, pictured here shortly after being born at just under 24 weeks survived where her twin Dotty did not, but she faced her own battle for survival

What are the benefits of kangaroo care?

Kangaroo care is a technique where a baby is held in skin-to-skin contact with an adult.

It gets its name from the way kangaroos hold their young close to their body in their pouch.

During each kangaroo care session the baby, wearing only a diaper and a hat, is placed on an adult’s bare chest.

The technique was originally developed in Colombia in the 1970s to improve the survival rate of premature babies.

It has since been expanded to all babies with all parents generally encouraged to do so as long as both they and the baby are health enough.

Mrs Dutton, 33, said: ‘Having to wait so long to hold her was really difficult, so when I finally did it meant so much.

‘It’s crazy to think that me cuddling her was having such an impact, it saved her life.’

Describing her experience as ‘amazing’, she added: ‘I would hold her and I could see on all the monitors that her heart rate was relaxing. It felt so special.

‘It’s something that was good for me and for her because it helps bring my stress down being able to hold her.

‘I held her for about 30 seconds when she [was] born and then she went straight in the incubator for one month.’

Mrs Dutton — who repeated the process daily for four months — claimed she was only able to hold Elsie for a ‘few hours every day’.

Known as kangaroo care, cuddles with parents have been proven to help premature babies survive.

Now back home with the family, Elsie is now getting cuddles from her father Scott and seven-year-old brother Charlie as well.

‘I almost didn’t think it was real, the day felt like a dream come true,’ she said.

‘I’ve never felt such a relief as when we got to walk out of the hospital and take her home.

‘It’s so surreal to hold your baby and think about how you could have lost her, and having her home after all that uncertainty was just bliss.’

A much bigger Elsie, next to a can of beans which weighs similar to her tiny birth weight of 1lb 2oz

A key part of Elsie’s recovery was kangaroo care, where a baby is held in skin to skin contact with an adult to help stabilise their body and make them stronger. Here is Elsie and her mother Amy in one of their earlier sessions

Elsie, pictured here with parents Amy and Scott and with her brother Charlie, is now able to enjoy cuddles from the whole family

The condition, caused by an abnormal connecting blood vessels in the twins’ placenta results in one foetus receiving more blood flow than the other, which can lead to one suffering from malnutrition.

Surgeons used a laser inserted through a tiny incision to rebalance the blood flow, with medic originally optimistic in how the operation went before Mrs Dutton started to experience complications.

‘But then I started bleeding very heavily and I had to have three blood transfusions,’ Mrs Dutton said.

‘We lost the heartbeat of the baby — and then a few hours later I had lost so much blood that I went into labour at 23 weeks plus four days.’

Dotty did not survive and Elsie needed urgent surgery to close a hole in her bowel just 10 days after being born in December 2021, a dangerous prospect for so small a baby.

Mrs Dutton said: ‘Doctors took me and Scott aside to say she might not survive the surgery.’

‘They said with her being that small there was a chance she wouldn’t survive the anaesthetic, and even if everything went okay she was still at risk while recovering because of infections and things.

‘We had no idea how long it would take because they wouldn’t know how much of her bowel had survived until they opened her up.

‘We had to wait three hours and it was the longest three hours of my life, we were just constantly clock-watching. It was a really scary time.

‘It was the biggest relief when we saw her again… the surgeon said it went amazing, like the best case scenario.’

In the end, Mrs Dutton had to wait a whole month before starting kangaroo care, a feeling she said was unlike anything she had ever known.

‘The first time I held her properly was honestly amazing, I’ve never known anything like it,’ she said. ‘There’s no other feeling in the world that compares.

During the first four months of Elsie’s life, Mrs Dutton had to stay in London to be close to her.

‘It was really difficult because I was spending most of the week on my own,’ Mrs Dutton said.

‘The two of them would arrive in London late on a Friday night, and children weren’t allowed on the ward so we were never all together as a family.

‘One of us had to be with Charlie, so usually Scott would come into hospital to spend a bit of time with Elsie and I would be out with Charlie.

‘Then, one weekend Scott’s sister came down with them and she was able to stay with Charlie while Scott and I were with Elsie together.’

Elsie was born at just 23 weeks and four days gestation – below the legal limit for abortion, and wasn’t expected to survive. Sadly her twin Dotty did not survive

After four months in St George’s Hospital, London and one at a hospital in Barnsley, Elsie was finally able to be brought home.

‘She’s literally defied all the odds, she’s just amazing, doctors are always so impressed with her,’ she said.

‘At the moment she’s still on oxygen but every time we go to a doctor’s appointment they reduce the amount she needs and she’ll be off it soon.’

‘It’s like a weird dream when I think of everything that’s happened.’

‘When babies like Elsie are born prematurely, clinical intervention is key but parent’s involvement also has a hugely positive effect,’ he said.

‘When mothers hold their babies in their arms for a long time, as they do with kangaroo care, stress for both mother and baby is reduced and we see improved short- and long-term outcomes.’

Kangaroo care is named after the way the marsupials hold their young close to their bodies in a pouch.

Whilst originally developed to improve survival rates for premature babies skin-to-skin contact it is now encouraged for all newborns.

But for Mrs Dutton the fact that Dolly, Elsie’s twin, is registered as a miscarriage rather than a stillborn is something that remains hard to accept.

‘Losing Dotty was really difficult, because it was before 24 weeks I was never able to register her as a stillborn, she was classed as a miscarriage,’ she said.

‘That meant I wasn’t able to put on Elsie’s birth certificate that she was a twin either.

‘Being able to have that on the paperwork would have given me some closure after going through something so difficult.

Normally a pregnancy lasts 40 weeks, with any babies born before the 37-week mark considered premature.

About eight of out every 100 births in the UK is premature, with babies born this way at greater risk from variety of problems due to being born before their bodies are ready.

The earlier they are born, the greater the risk of problems.

The abortion limit in the UK is 24 weeks, however later term abortions can be carried out in limited circumstances, such as if the mother’s life is at risk.

Medical advances mean survival rates for babies born at 24 weeks is around 60 per cent.

But this plunges to just 10 per cent for babies born at 22 weeks and close to zero for births before then.