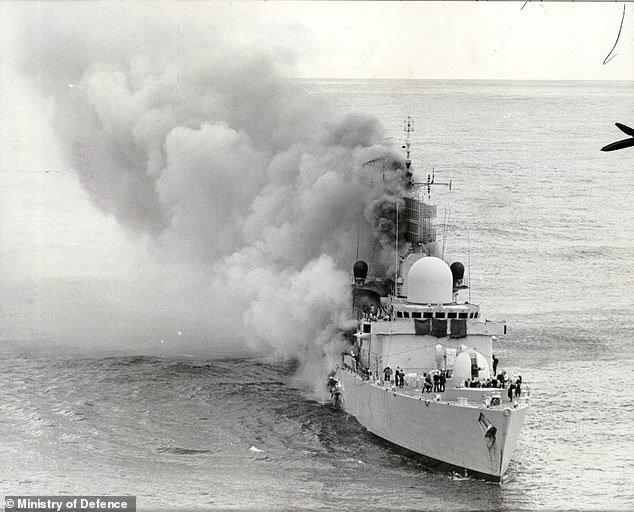 By Niamh Lynch For The Daily Mail

Senior MPs have called for an inquiry into whether France lied about the existence of a ‘kill switch’ in missiles that led to the deaths of 46 British sailors in the Falklands War.

Today marks the 40th anniversary of the HMS Sheffield attack, which caused the first British fatalities of the conflict.

Senior MPs have now called for an inquiry into what the French government did or did not share with then-Prime Minister Margaret Thatcher and her Cabinet – and whether the missiles could have been remotely deactivated.

Tobias Ellwood, chairman of Parliament’s defence select committee, said the issue ‘warrants further investigation’ while former defence secretary Liam Fox said France should be ‘open and honest’ about what happened in the 1982 war.

British officials appealed to its longterm military ally for information about how the Exocet missiles worked and whether they could be disabled as a Royal Navy task force sailed to retake the islands from Argentina.

Experts in the UK thought that the missiles contained a kill switch partly through examining earlier versions bought by the Army.

The maker of the weapons, French company Aerospatiale, denied the kill switches existed.

Mr Ellwood said: ‘We don’t know the wider decision-making that surrounded this. Indeed, those responsible might not even be alive today.

‘As we look to future battles we must learn from past events, and that includes how we work with allies and how we share critical intelligence.

‘It certainly would have been game-changing had France chosen to share this characteristic of the Exocet.’