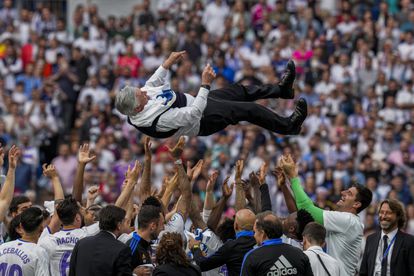 Carlo Ancelotti has spoken about his future.

The Italian coach, who on Saturday became the first man in history to win league titles in Italy, England, France, Germany and Spain, admitted he’ll probably retire when he leaves Real Madrid.

“After Real Madrid, yes, I will probably retire,” Ancelotti told Prime Video in comments carried by Diario AS.

“If the club wants me here for ten years, I’ll coach for ten years. But then I would like to be with my grandchildren, go on vacation with my wife. There are so many things that you put aside when you choose this profession.

“I’ve never been to Australia, I’ve not been to Rio de Janeiro. I would like to visit my sister more often. Unfortunately, I can’t do that today, so the day I retire I’ll be able to do all these things.”

Los Blancos welcome the Premier League side to the Santiago Bernabeu to contest the second leg of the Champions League semi-final. It’s as big a game as they come.

And Madrid are in a good mood going into the tie having won La Liga with four games to spare at the weekend following their 4-0 defeat of Espanyol at the Bernabeu.

City won by an identical scoreline against Leeds United at Elland Road, of course, and do hold the advantage of having won the first leg at the Etihad Stadium 4-3 before travelling to Spain.

Despite that, Madrid are confident they can pull off another comeback, just like they’ve done against Paris Saint-Germain and Chelsea in the last 16 and quarter-final of the competition.