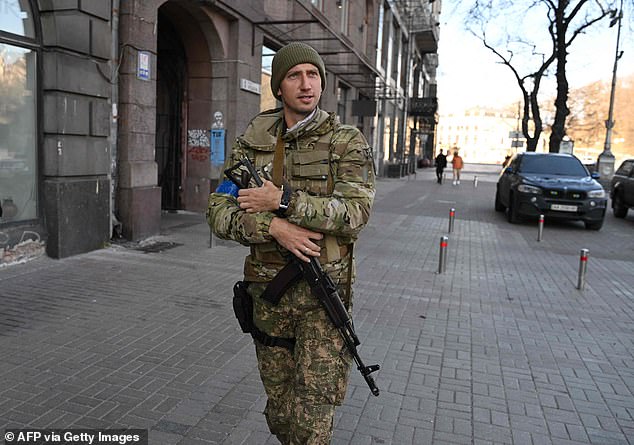 Only after witnessing the horrors of Bucha did Sergiy Stakhovsky realise he had acquired a soldier’s instinct.

Sent up to Kyiv’s northern suburbs a few weeks ago as part of an armed escort, the experience changed the whole perspective of Ukraine’s one-time leading tennis player.

‘At the start of this they asked me what I would do if I saw a Russian soldier, how I would react, if I would shoot,’ he recalls. ‘And I honestly didn’t know what I would do. Having been in that place I can say I would not hesitate. ‘

In January he was playing in the qualifying rounds of the Australian Open, prior to joining up in February. Now he was amid the aftermath of what have been among the worst atrocities committed by the Russian army.

‘The things they have done there, they cannot be human. You haven’t seen half of what is real there on your TV. They are sadists, they aren’t human. It’s one thing when someone presses a button 200 kilometres away and the missile lands on a train station killing children, it’s something else when someone is holding a gun to a child’s head and shooting, or burning the bodies of women they raped.

‘My unit was there to secure documentation – I can’t say too much but it is to do with the prosecution of certain individuals. I was helping escort a prosecutor. There were some of them (Russians) left behind there who changed into clothes so they would look like locals, so we were protecting.’

Sergiy Stakhovsky, who has been ranked as high as 31 in the world and who played in the Australian Open in January, joined the Ukrainian army when Vladimir Putin launched his invasion

Stakhovsky has spoken little since the initial flurry of publicity that accompanied him signing up to what is known as the Active Reserves. Two months in, he reflects on the abrupt life switch that, naturally, has already left its mark.

‘I hope it hasn’t changed me but I feel perhaps more numb or raw, I’m not sure how you would say it. Those images (what he found in the northern suburbs) are going to stay with me for a long period, but I hope I am going to be able to give them up some time.’

Unsurprisingly he fully endorses last week’s banning of players from Russia and Belarus from Wimbledon, the tournament where in 2013 he caused a famous upset by knocking out Roger Federer.

On this occasion, however, he spends longer discussing a far more substantial measure of support from the UK, the supplying of Nlaw anti-tank missiles.

‘We are very grateful to Great Britain for its support, grateful for the military support, Britain has stood out. I actually trained on the Nlaw missile although I haven’t shot one. That helped us stop the Russians.

‘At one point I was in a unit that was firing them, the success rate was extremely high, although the battery dies quickly when it is very cold.’

Asked whether he has seen enemy soldiers killed, he responds, ‘I would rather not comment.’

He was deployed to the northern suburbs of the capital Kyiv, where he saw the gruesome aftermath of the Russian occupation

Most of his service has been on patrol in Kyiv, and performing the role of an armed escort. While that has not put him in the thick of the fight there have been dangerous excursions.

‘I wasn’t, I would say, frontline, we have plenty of motivated and well trained troops ready to take the fight. I went to Kharkiv for three nights doing an escort, that was very different to Kyiv, there was shelling and bombs landing 500 metres away with the building shaking.

‘I played some tennis in Kharkiv, and I could hear bombs exploding, that was different. Professional tennis seems ages away now. It is surreal.’

Stakhovsky, 36 and a former world number 31, admits that he was not expecting Wimbledon to make the announcement this week which has seen his former sport turn on itself.

‘I cannot say it was a joyful reaction but it is something I believe should be done,’ he says. ‘ In the first two weeks of the war I was more laid back about it, thinking that every individual should be judged based on their stance, but we know how the Russian troops are behaving in the occupied cities. We know what they can do: slaughter, rape, torture. So I’m sorry, I now have a different view.

Patrolling Kyiv and other cities could hardly be more different from Centre Court at Wimbledon, where he famously defeated the then defending champion Roger Federer in 2013

‘To be honest I was a bit shocked because it (Wimbledon’s) is a very strong stance which I did not expect. But of course I am grateful for their decision because I don’t think there is anything else that can be done right now. It is a championship which has always had its own rules. All white (clothes) and other things, they have always been for the right direction for the game. It was always different because it is a private club.’

His sympathy for Russian and Belarusian players is very limited. Even if they are not directly responsible for Putin’s actions he believes they should be saying more.

‘You cannot be neutral. If they are scared about financial repercussions or spending a night in jail well I’m sorry, that is still better than a rocket landing on your doorstep.’

He reveals that, when he joined up, many of the Russians he used to share a locker room with were in contact.

‘In the first two weeks I had a lot of messages, pretty much all of them said that privately they were against the war. At first I answered to all the players but then the messages became overwhelming. I was having six hours rest between shifts so I didn’t have enough time. I received hundreds of messages from all players and people in tennis and in the end I couldn’t answer them.

‘There were Russians who were at least asking me at the start. But I don’t need them texting me every week and asking how I am.’

He is in contact with the considerable female contingent of Ukrainian female players, some of whom have been vocal about the attitude of their Russian and Belarusian peers.

‘What I hear from a lot of our girls is that they (Russians) don’t say anything, they don’t seem bothered, as if everything is fine. (Ukrainian) Marta Kostyuk’s family was living on the frontline for a week.

‘For the last eight years there were sanctions on Russia and they were still enjoying their lives. This the first time they are losing some of their wealth, their yachts, their mansions in London, which is good. Finally they are feeling it, but they are losing soldiers who signed up, we are losing civilians. Their institutions failed them, but that is not a problem for Ukrainians. They created a monster which is killing tens of thousands, we don’t actually know the number, it could be more like 100,000.’

Stakhovsky is speaking from the west of the country, and has just been allowed home to where he is based in Hungary, to visit his wife and three children.

His current role is trying to organise a consignment of bullet-proof vests, gloves and boots, and this week he will return to Kyiv.

He has simple hopes for the future, but believes that it is optimistic to expect matters to have significantly improved by the time Wimbledon comes around in late June.

‘I just hope we will eventually go back to normal in some way, we have to. But unless the western world supplies us with more weapons so we can push the Russians back to the border this war is going to last for some time.’