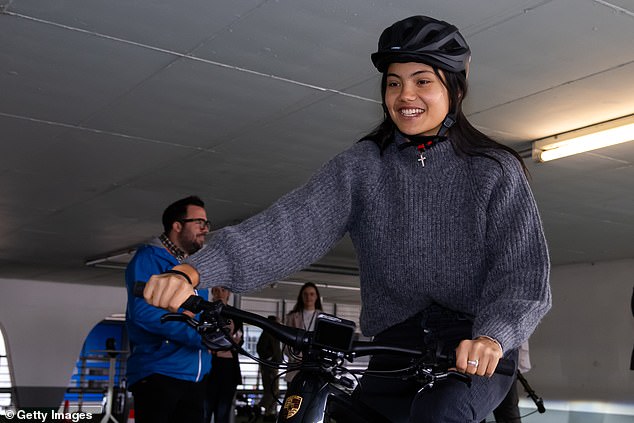 She put on a fighting performance against Iga Swiatek at the Porche Tennis Grand Prix on Friday.

However, it wasn’t enough for Emma Raducanu, 19, to beat the world number one as she suffered a 6-4, 6-4 defeat at the Stuttgart Open.

Not letting her loss get her down, the British tennis player put on a smile as she attempted the sponsor’s cycling challenge.

On your bike: Emma Raducanu was all smiles as she took time off from the Porche Tennis Grand Prix Open in Stuttgart on Friday to attempt the sponsor’s cycling challenge

In only her fifth senior match on clay, the US Open champion played in an encounter that was closer than predicted, despite the Kent teenager needing treatment during the second set.

It was also the first time the athlete faced a top ten player in her career.

Earlier this year, the superstar also showed off her love for motocross bikes.

The tennis star got back on a bike at Canada Heights track in Kent for a Nike advert in February.

Safety first: The tennis pro made sure to have the essential head gear as she took part in the challenge

Beep beep: The stunning brunette beamed as she took part in some pro shots during the busy photo call

On winning the US Open, she revealed: ‘I was racing go-karts for a year or two when I was younger and then I transitioned into motocross… but I couldn’t carry on with it as my tennis career progressed.’

She previously posted childhood photos of herself riding a Kawasaki, including a close-up of her face in a green helmet.

No fear: Emma previously posted childhood photos of herself riding a Kawasaki, including a close-up of her face in a green helmet.

Behind the wheel: Emma sad her love for motor sports began when she was little

Emma enjoyed a hodgepodge of sports as a child, encouraged by her father to try horse riding, swimming, basketball, golf and skiing.

Her victory at the US Open saw her named BBC Sports Personality of the Year 2021 and sparked a flurry of endorsement deals.

She was dripping in £40,000 worth of Tiffany jewellery when she stormed into the second round of the Australian Open last month having signed an estimated £2 million deal with the luxury jeweller in September.

Delighted: The sports champion appeared in a playful mood on the day despite losing out on the tournament

She is also a global brand ambassador for British Airways, and Evian and recently signed a lucrative deal with Dior.

She could now be worth £6million according to experts.

In February she appeared to poke fun at her critics in a 20 second advert for Nike which showed her hitting balls as the words ‘distracted’, ‘perfect’, ‘fluke’ and ‘one-hit wonder’ flashed up on screen.

Happy: The sports star who loves tennis, also loves many other sports including cycling