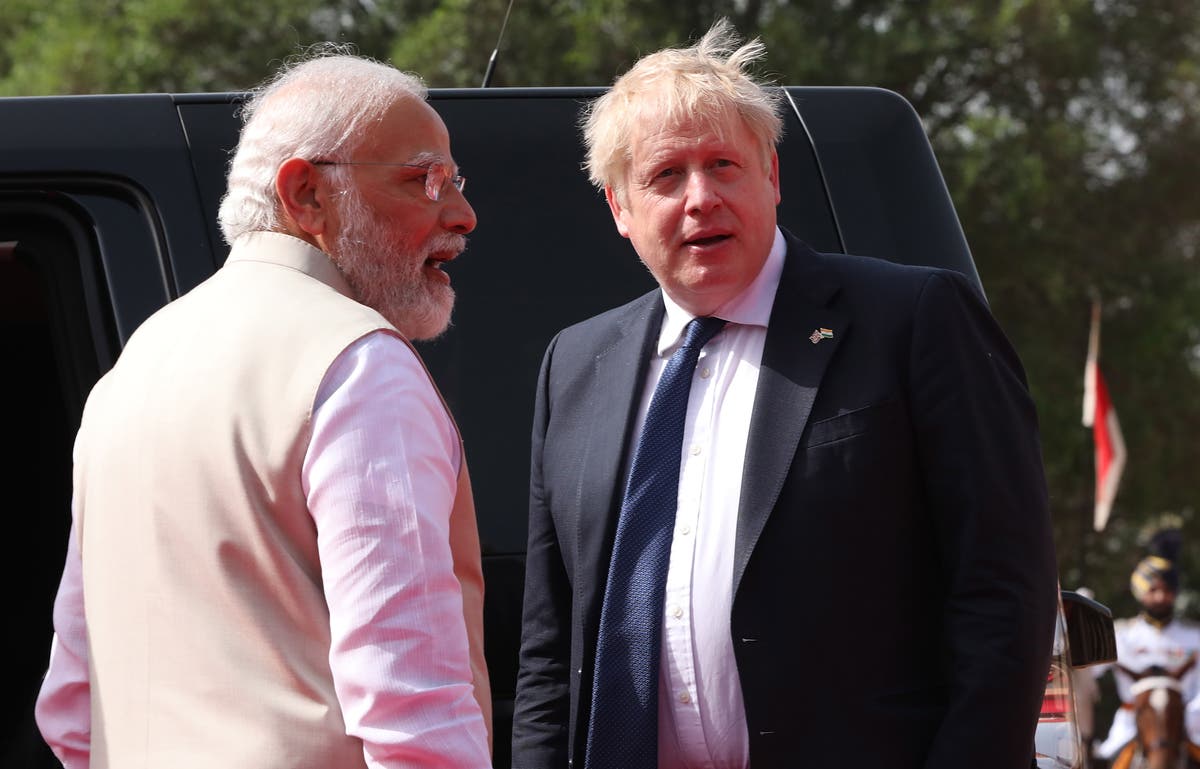 Large white sheets appear to have been used to cover up the view of slum housing along the route taken by Boris Johnson during his visit to Gujarat, India, on Thursday.

A number of videos and images posted on social media by local journalists appear to show white sheets lining the roadside near the former home of Mahatma Gandhi in Ahmedabad, which was visited by the UK prime minister on the first day of his India tour.

Later that day other images showed the sheets being taken down from their large metal frames, once again revealing the view of slum housing behind.

There is no official confirmation that the Gujarat government, led by prime minister Narendra Modi’s Bharatiya Janata Party (BJP), made these arrangements for Mr Johnson’s visit, and both state and city officials The Independent spoke to said they were not aware of any plan to obscure the view of slums.

One video, shared online by filmmaker Vinod Kapri and purportedly recorded on Thursday in Ahmedabad, shows white cloth blocking the view on the side of the road as normal traffic continues in the busy city.

Addressing Mr Modi, who hails from Gujarat and has increasingly offered the state as a stopover for visiting foreign dignitaries in recent years, Kapri wrote: “You were the chief minister of Gujarat for 12 years. For 8 years you are the prime minister of the country @narendramodi. Still, what is it that you are ashamed to show @BorisJohnson ?”

One later video, posted on Thursday evening by a journalist named Umashankar Singh who works with news channel NDTV, shows the white sheets being taken down from their scaffolding, revealing shacks and parked scooters behind.

“Curtains come off as Johnson leaves,” he wrote on Twitter on Thursday after the prime minister had left for Delhi for his talks with Mr Modi on Friday.

Mr Johnson had landed in India’s western province of Gujarat at 10.30am local time on Thursday and was received by chief minister Bhupendra Patel. His itinerary in Ahmedabad included the visit to the famous Sabarmati Ashram, the old home of Mahatma Gandhi, where he posed sitting with Gandhi’s famous charkha (spinning wheel).

In his opening remarks to Mr Modi during his ceremonial reception in Delhi on Friday morning, Mr Johnson commented on how much he had enjoyed the “fantastic welcome” in Gujarat and said he “wouldn’t necessarily get that … everywhere in the world”.

Mr Johnson’s visit to India came amid calls for his resignation back home, after he was fined by the police for breaching his own Covid lockdown rules.

This isn’t the first time steps have been taken to block slums from view during a visit by a foreign dignitary to Ahmedabad. When then-US president Donald Trump visited Gujarat in early 2020 for a stadium event alongside Mr Modi dubbed the “Namaste Trump” rally, Ahmedabad’s municipal corporation built a four-foot-high wall to obscure a stretch of slums on the American leader’s route through the city.

Mr Johnson’s own India visit had already been mired in controversy after he visited a JCB factory, one day after the same company’s equipment was used to demolish houses of mostly poor Muslims in the North Delhi locality of Jahangirpur, an area that has seen back-to-back incidents of religious violence over the last weekend.