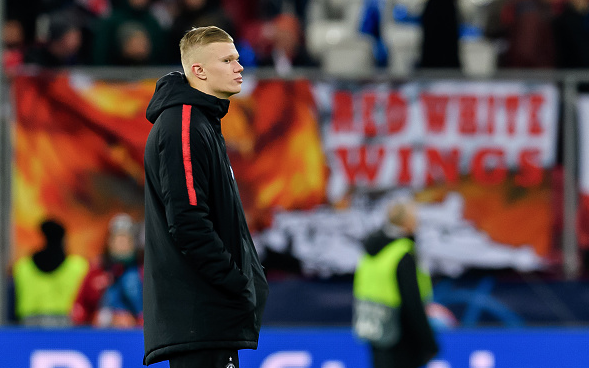 Manchester City ‘had almost convinced’ Erling Haaland to join them this summer but now face a wait to see if he will pick them ahead of the competition.

That’s according to Mundo Deportivo, who say Barcelona have not given off hope of pulling off a deal for the Borussia Dortmund star.

The newspaper explains that we are now in the ‘final sprint’ of the Haaland saga, with the striker set to make a decision on his future sooner rather than later.

He’s definitely leaving Borussia Dortmund this summer but where he ends up remains to be seen, with all the big clubs in Europe keen on his signature.

Manchester City are one of them, and several reports over the last few weeks have had them edging closer to finalising a deal and securing his signature.

Mundo Deportivo back that up, stating that City are ‘fearsome rivals’ in the battle for Haaland and ‘had almost convinced’ him to make the move to the Etihad.

However, he’s not made a definitive decision, and Barcelona have now ‘discretely made it known’ to Mino Raiola, Haaland’s agent, that they are interested.

They’re playing their cards close to their chest but know that the allure of playing for Barcelona is something they can use to their advantage.

Furthermore, they have a better relationship with Raiola than their counterparts at Manchester City, particularly Pep Guardiola, who had a public falling out with the agent after Zlatan Ibrahimovic’s time under the Spaniard at Barcelona.

Their relationship has been frosty since then, and Barcelona know they can use that and the ‘doubts’ that Haaland has about the move anyway, to convince him to swap Dortmund for Barcelona instead and ignore the calls from the Etihad.

It’s still a difficult deal for them to do, particularly with the finances involved, but they’re willing to battle, albeit discreetly, having previously appeared to have dropped out of the race.