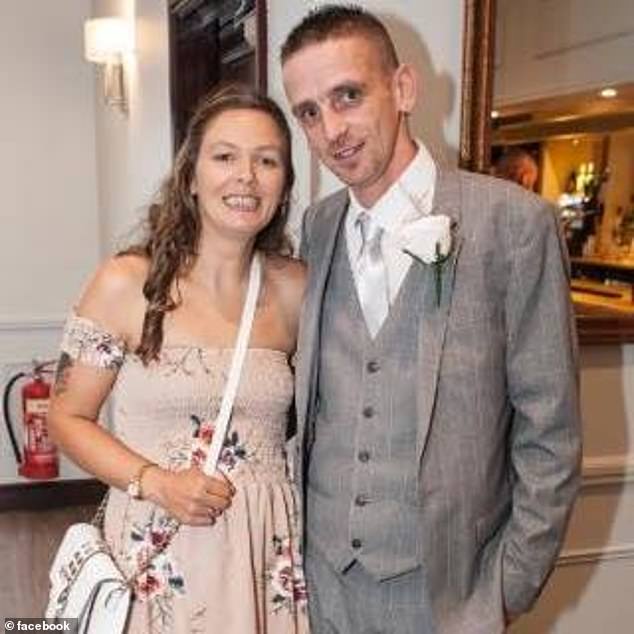 A devastated mother of a baby girl who was savagely mauled to death by two Rottweilers has warned that ‘all dogs are dangerous’ after a horrifying string of fatal attacks involving children.

Five-month-old Cadey-Lee Deacon was slain by the two dogs at her family’s pub in Leicester, back in September 2006.

Amy Burchell, a mother of six children, is warning other parents that all ‘dogs are dangerous’, ‘unpredictable’ and can ‘suddenly turn’ on people.

Both she and husband Lee told the Sun they will never own a dog again after the trauma still lives with the family, made fresh by more high profile attacks by dogs.

Bella-Rae Birch was just 17 months old when an American Bully XL mauled her to death at her home in St Helens in March, while Jack Lis, 10, was mauled to death by the same breed of dog – named ‘Beast’ – in November 2020.

Both Amy Burchell and husband Lee, both pictured, told the Sun they will never own a dog again after the trauma still lives with the family, made fresh by more high profile attacks by dogs

These events have made Amy’s own pain come to the surface once again, especially after Elon Ellis-Joynes who was 12 days old when he was attacked by the family dog, a Chow Chow Alsatian cross, called Teddy.

Paramedics called to the home found the baby had suffered 40 puncture wounds during the attack, which happened when his mum Abigail Ellis, 28, nipped to the toilet in Doncaster, South Yorkshire, on September 13, 2020.

Elon’s father Steven Joynes, 36, pleaded guilty to a charge of being the owner of a dog which caused death when dangerously out of control and was sentenced to four years in prison.

Tributes paid to Cadey-Lee Deacon who was killed in 2006, left, and her mother Amy Burchell writes she is ‘forever loved’, right

Lee Burchell, Cadey-Lee’s step-father, told the Sun that their tragedy was different as no-one was charged for owning a dog which was dangerous and caused death.

People are being tried for 10-year-old after Jack’s death who was playing at a friend’s house after school when he was mauled.

The dog’s who killed 17-month old Bella-Rae were ‘humanely destroyed’.

Both the guard dogs, Bruno and Bessie, were also later destroyed after Cadey-Lee’s tragic death.

They were kept in a kennel on the roof of the Rocket pub, run by Lee’s parents, which the couple were set to move out from.

An inquest heard that she had fatal injuries after one of the two Rottweilers carried her from her Moses basket.

Bella-Rae Birch, pictured, was mauled to death in March by an American Bully dog which had been recently bought

What’s the Dangerous Dogs Act? Which dogs are banned? And why is it controversial?

WHAT IS THE DANGEROUS DOGS ACT?

The Dangerous Dogs Act 1991 bans or restricts certain types of dogs and makes it an offence to allow a dog of any breed to be dangerously out of control.

It was introduced 30 years ago by Home Secretary Kenneth Baker ‘to rid the country of the menace of these fighting dogs’ after a string of attacks.

WHICH DOGS ARE BANNED IN THE UK?

It is illegal to own four breeds of dogs without an exemption from a court. They are:

The law also criminalises cross-breeds of the above four types of dog – meaning that whether a dog is prohibited will depend on a judgement about its physical characteristics, and whether they match the description of a prohibited ‘type’.

WHAT HAPPENS IF THERE’S A DOG ATTACK?

You can get an unlimited fine or be sent to prison for up to six months if your dog is dangerously out of control.

You may not be allowed to own a dog in the future and your dog may be destroyed.

And if you allow your dog to kill someone you can be sent to prison for up to 14 years or get an unlimited fine.

WHY IS THE ACT CONTROVERSIAL?

Both the Royal Society for the Prevention of Cruelty to Animals and the British Veterinary Association have protested against the ban, insisting there is no scientific evidence that all individuals of a breed are dangerous.

However, Met Police data suggests that in incidents involving ‘dangerously out of control dogs’, banned breeds account for about a fifth of offences.

Jack Lis (pictured) was mauled to death by the dog – named ‘Beast’ – while playing at a friend’s house after school in Pentwyn, Penyrheol, Caerphilly

The post-mortem found that Cadey-Lee had bite injuries to her head, chest and abdomen after Amy found her baby’s body covered in blood.

It was recorded as an accidental death by the coroner and after a police investigation, the Crown Prosecution Service did not find sufficient evidence that would lead to a conviction.

Amy told the inquest: ‘She was my only child and everything to me.

‘What has happened is the most tragic loss I could face.’

And says everyone still ‘misses her’ 16 years on from the tragedy.

West Mercia Police also confirmed the three dogs were seized on Friday after the death of a two-year-old boy have been confirmed as rottweilers.

Officers removed the ‘out-of-control’ dogs to secure kennels after the child sustained serious injuries at his home in Egdon, Worcestershire, on Monday.

The only four breeds it is illegal to own without a court exemption in the UK are American Pitbull Terriers, Japanese Tosas, Dogo Argentinos and Fila Brazileiros.

The Dangerous Dogs Act 1991 also criminalises cross-breeds of the four illegal types – meaning that whether a dog is prohibited will depend on a judgement about its physical characteristics, and whether they match the description of a prohibited ‘type’.