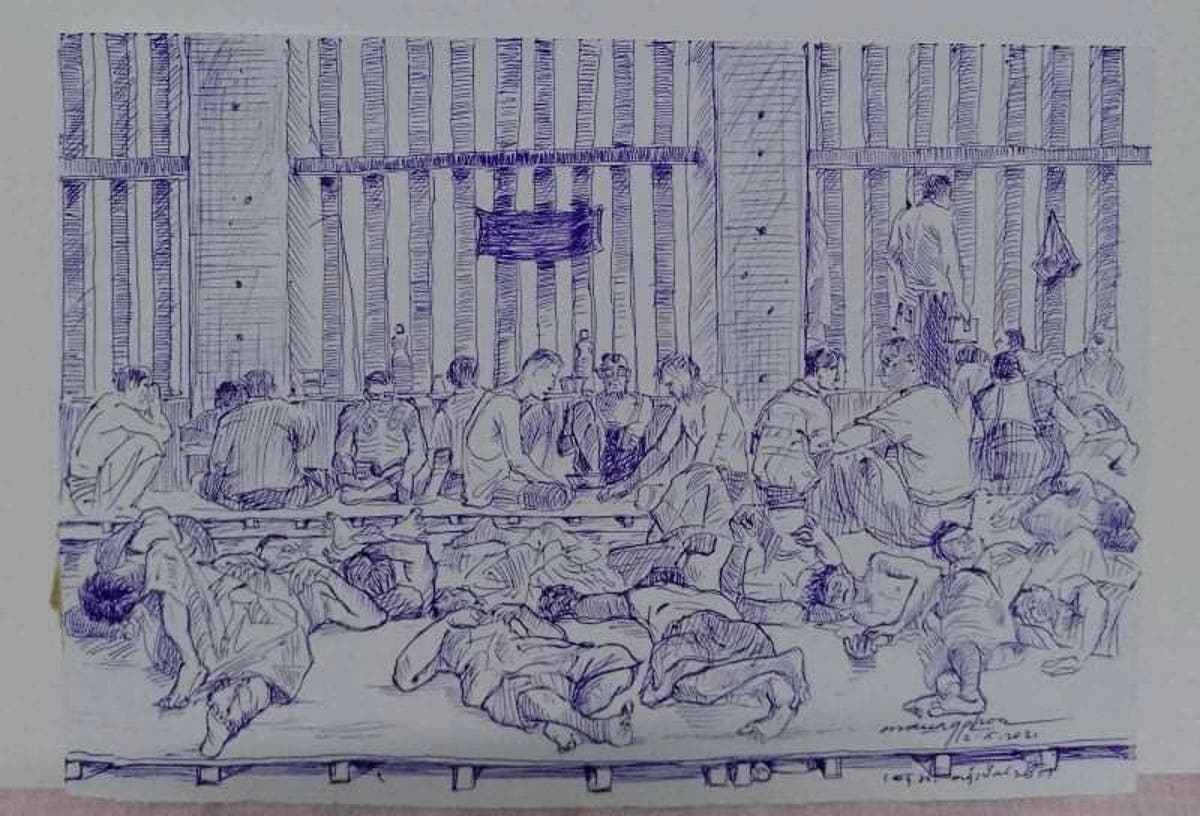 A year after Myanmar’s military junta staged a coup to oust the elected government of Aung San Suu Kyi, sketches from inside the country’s most notorious jail used to house dissenters, have emerged to show the stark living conditions.

The Insein Prison in Yangon is Myanmar’s largest jail. Though it was built to house 5,000 prisoners, there are more than 10,000 people jailed there.

A total of 10,072 people have been detained, including Ms Suu Kyi and most of her cabinet, since the coup, according to the Assistance Association for Political Prisoners. Many of the detainees are housed in Insein prison.

Fourteen sketches smuggled out of Insein by former prisoner Nyi Nyi Htwe, 24, have revealed the conditions that inmates live in, reported Reuters.

Mr Nyi Htwe spent several months in jail in relation to a defamation conviction for joining protests against the coup. He was released in October.

The sketches in blue-ink show male prisoners in their dormitories, queuing up for water from a trough to wash, talking or lying on the floor.

The sketches were drawn between April and July last year.

Mr Nyi Htwe said that the artist had given them to him as a birthday present and did not want to be identified.

Eight recently released inmates told Reuters that the jail is infested with rats, bribes are used commonly and prisoners have to pay for sleeping space on the floor, and complained of lack of medical attention for those who are ill.

Mr Nyi Htwe said he and 100 others were in a room where they “slept a finger-width apart”. He added that he watched prison officers beat inmates with batons.

“We’re no longer humans behind bars,” he said.

Another former inmate, Sandar Win, 42, said: “Rats ran around in the room. The toilets were filthy. The food was mixed with flies. Those who couldn’t pay a bribe had to sleep next to the toilet bucket.”

Ms Win is a social worker who was jailed at Insein for several months for defamation after protesting against the junta.

Former female inmates also said that access to outdoor latrines was limited, forcing prisoners to defecate in buckets in their rooms.

They added that there was little medical attention, and skin and bowel diseases spread easily under these conditions.

The prison administration has not yet issued a response to these accounts.