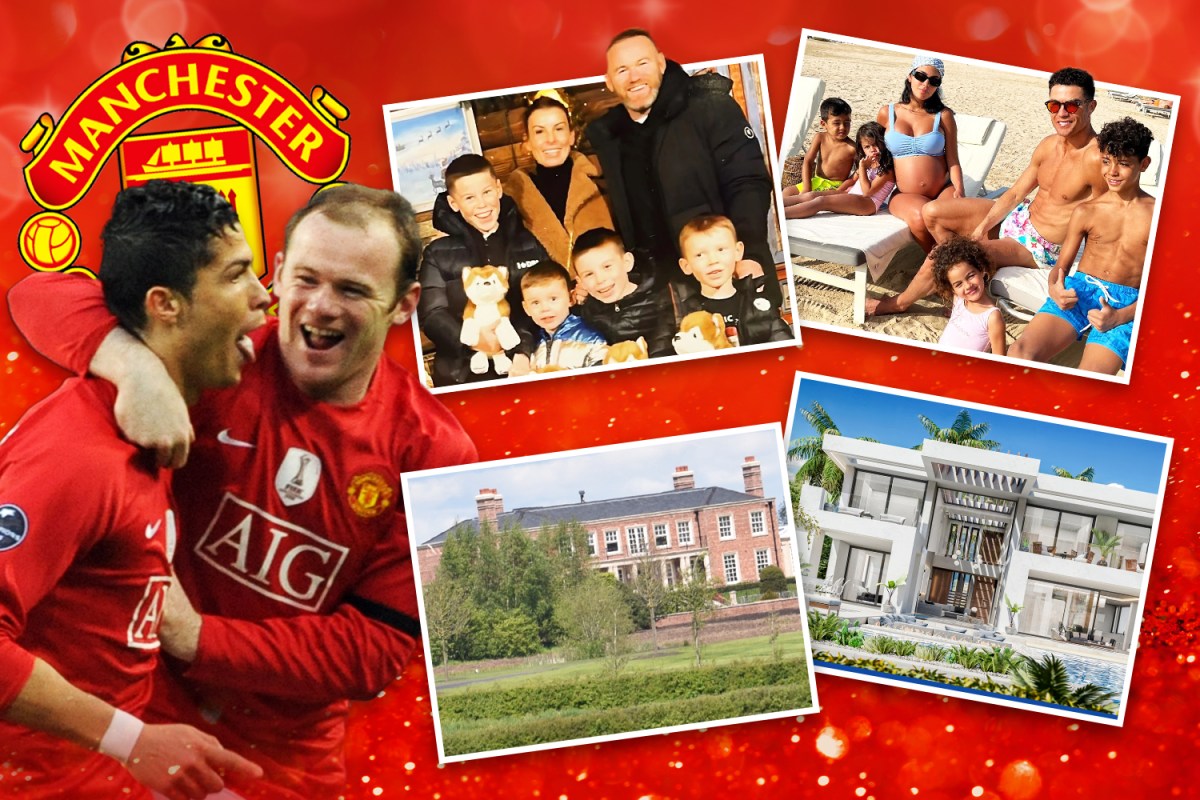 CRISTIANO RONALDO and Wayne Rooney are at loggerheads… AGAIN.

Forget “Winkergate”, the Derby County boss has now urged Manchester United to axe the Portuguese superstar during an appearance on Monday Night Football this week.

When asked if Ronaldo’s signing has worked out for United, Rooney said: “You’d have to say no, at the minute.

“I think he’s scored goals, he’s scored important goals in the Champions League early on in the season. He scored the hat-trick against Tottenham.

“But I think if you look to the future of the club you would have to go with younger, hungry players to do the best to lift Manchester United over these next two, three years.

“And obviously Cristiano is getting on a bit. He certainly isn’t the player he was when he was in his 20s. And that happens, that’s football.

“He’s a goal threat but I think the rest of the game they need more, they need young, hungry players.”

Ronaldo has since hit-back, although it may have been tongue in cheek, by sharing a photo from MNF on Instagram and commenting “Two jealous” alongside an eyes emoji.

Fired barbs aside, there’s no doubt the pair have had amazing careers, built up huge wealth, scored glam Wags, and have a lifestyle that’s enviable of the football world.

And, of course, there’s been controversies along the way…

Ronaldo might not have played the best football of his career at United, but when he played alongside Rooney from 2004-2009 they formed a lethal partnership.

They won three league titles together, as well as the Champions League in their five years at Old Trafford leading the Red Devils front line.

A counter-attacking goal against Arsenal at the Emirates in a Champions League semi-final epitomised the chemistry the pair had on the pitch.

Rooney would go on to become United’s all-time top goalscorer with 253 goals from 559 matches.

When Ronaldo left United, he grew into a bigger superstar – scoring 450 goals for Real Madrid in just 438 games and adding four more Champions League titles to his name.

He would then win Serie A with Juventus twice, before returning to United.

Internationally, his career knows no bounds. With 115 goals for Portugal he’s scored more than anyone else in international football, as well as lifted the European Championships.

After leaving United, spells at Everton, then DC United wound down his career.

Derby County gave Roon a return to our shores, and he is now battling to save them from a drop to League One.

Rooney and Ronaldo, because of their high-profiles, were always going to have their love-lives splashed on the front pages.

Rooney went for his childhood sweetheart, Coleen. After growing up together in Croxteth from the age of 12, they married in a glitzy ceremony in Portofino, Italy.

The wedding was paid for by OK! Magazine who were said to have secured the rights to details and pictures of the nuptials for a cool £2.5million.

They have four sons together, Kai, Klay, Kit, and Cass.

Ronaldo was linked to a string of beautiful women in the past, and dated Russian supermodel Irina Shayk.

But, after playing the field, he fell in love with former shop assistant Georgina Rodriguez.

The Spanish stunner has since blossomed into a marketing man’s dream, inking a reported five-figure Instagram deal with fashion house Pretty Little Thing, and is ambassador for the group alongside Kourtney Kardashian and Molly-Mae Hague.

And if that’s not enough, she’s the star of her own Netflix reality TV series I Am Georgina.

Not to be outdone, Coleen appears in Rooney – an Amazon Prime documentary – and talks about the early stages of their romance as well as claims of cheating in their relationship.

Like the Rooneys, Cristiano and Georgina have their own brood. She is currently expecting twins to join Cristiano Jr, Eva Maria, Alana Martina and Mateo.

Money is certainly no object for the pair, who boast incredible fortunes.

Rooney is said to be worth around £122million, while Ronaldo has amassed a pot worth £363million.

That’s meant off the pitch they live a life of luxury, from living in mansions, driving expensive cars, owning super yachts and flying in private jets.

After four years of delays, the Rooneys finally moved into their £20million Cheshire home.

Called ‘Mini-Versailles’, the six-bedroom home sits on 40 acres of land.

There is also not one but two lifts – one for the family to use and another for visitors.

Outside it boasts stables, a six-car garage, an orangery and two man-made fishing lakes.

Ronaldo is back in Manchester and renting a mansion that used to belong to Andy Cole.

However, the jewel of his property empire is in Marbella.

The area the lavish house sits in is called ‘The Superstars Cul-De-Sac’ because of the number of famous residents who live there.

UFC star Conor McGregor is also believed to own a property nearby.

It’s got four bedrooms, high-vaulted ceilings and incredible views of the sea.

There’s a private golf course, the driveway is lit up by LED lights, it has a private gym, an in-built cinema and infinity pool.

Ronaldo has also spent his well-earned cash on a luxury £5.5million yacht and a £20million private jet.

And his £17million car collection is one of the best in sport – boasting high-profile motors including a Bugatti Centodieci worth £8.5million.

Most recently, he was seen in a £200,000 Aston Martin DBS driving into Carrington.

His old Lamborghini Gallardo from 2007 was recently listed on AutoTrader.

Off the pitch, Ronaldo has more or less kept himself out of trouble.

On it, the pair were famously embroiled in “Winkergate” – when the Portuguese superstar saw his then team-mate sent off in a World Cup quarter-final between England and Portugal, and delivered a nod to the cameras.

Incredibly, the two brushed the incident under the carpet when they returned for Man Utd.

Two years prior to that moment, Rooney would find himself on the front pages of the papers after admitting having sex with prostitutes after he was caught on CCTV visiting a backstreet brothel.

Rooney was said to have paid £45 for the services of a 48-year-old grandmother in a rubber catsuit and a mother-of-six dressed as a cowgirl 10 times.

“Foolish as it now seems I did on occasions visit massage parlours and prostitutes,” he said.

“I now regret it deeply and hope people may understand that it was the sort of mistake you make when you are young and stupid. It was at a time when I was very young and immature.”

Almost 10 years later, Rooney would again get himself in bother – when he was stopped by police for drink-driving while partying with reveller Laura Simpson.

A move to the States failed to curb his appetite for fun. He was seen enjoying a drink with barmaid Vicki Rosiek, although nothing untoward happened.

And last year, he was pictured with a group of young woman in a hotel room having fallen asleep. Again, nothing was said to have happened.

A rape claim against Ronaldo made by Kathryn Mayorga in Las Vegas from 2009 has always been firmly denied and was recommended for dismissal in late 2021.