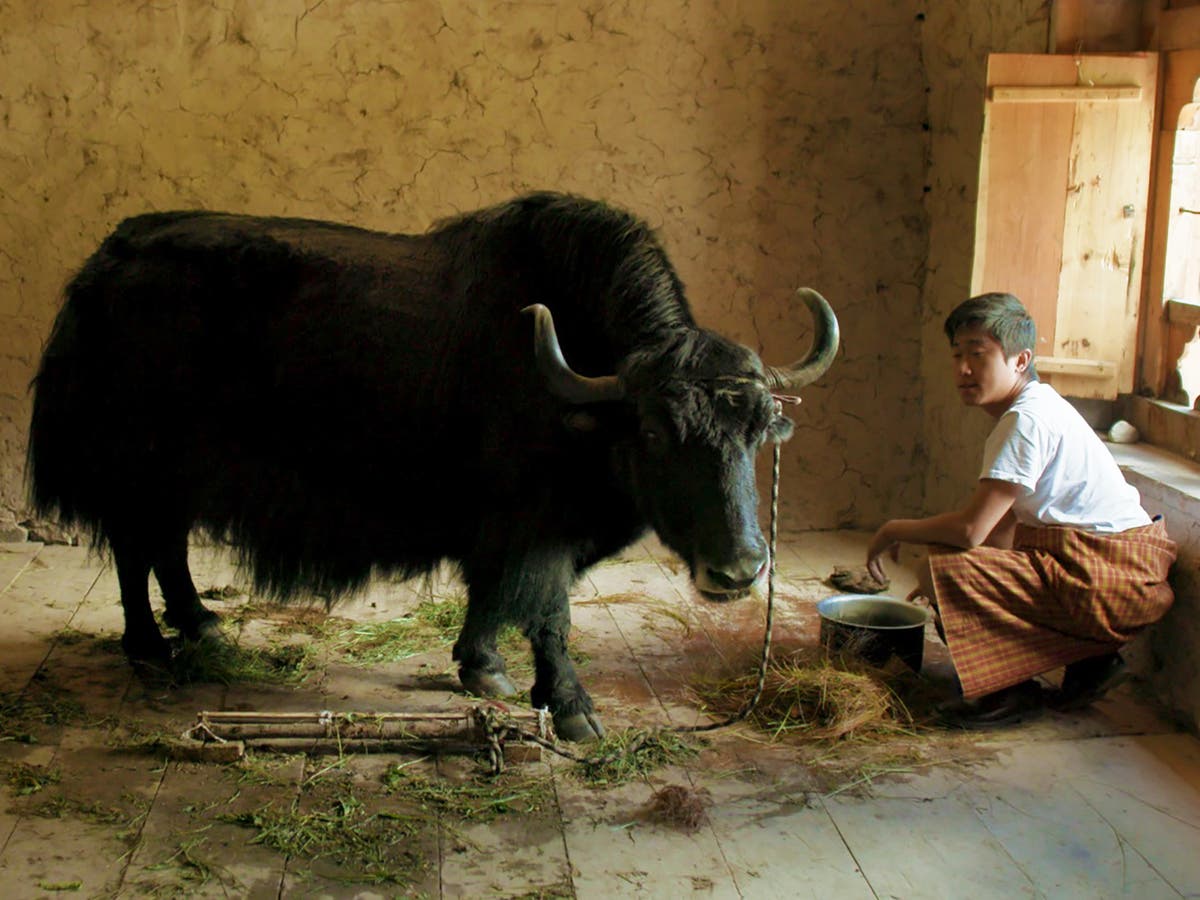 Pawo Choyning Dorji has more in common with the protagonist of his debut film than first meets the eye. Like Ugyen, the reluctant school teacher of his Oscar-nominated Lunana: A Yak in the Classroom, the 38-year-old filmmaker has also navigated uncharted territory for the sake of his home country. Both Ugyen’s final year of mandatory government service and Dorji’s bid to bring Bhutanese cinema to the masses can be traced back to Lunana – a forgotten village in the tiny kingdom of Bhutan that is 3,600 metres above sea level. But Dorji didn’t expect his unassuming indie to earn a nod from the Oscars. Or go down in history as Bhutan’s first ever nomination.

Up for Best International Feature at the Academy Awards on Sunday (27 March), Lunana follows Sherab Dorji’s Ugyen, who dreams of escaping to Australia and becoming a singer. His plans are derailed, however, when he’s posted to the film’s titular village on a year-long assignment, which he accepts somewhat resentfully. Living among the locals and adapting to the gentle pace of Lunana, he goes on to forge deep bonds with the school children entrusted to his care, as this quietly uplifting film explores the true meaning of joy, purpose, and connection.

When Lunana was first announced as an Oscar contender, social media was abuzz with questions about the “yak” of the film’s title. Those that have watched Dorji’s movie know that it’s literal: a yak named Norbu is indeed in Ugyen’s classroom. Norbu (meaning “wish-fulfilling jewel”) has also been interpreted as a metaphor for Ugyen himself, since the symbol of a precious jewel is used in Himalayan Buddhist culture to signify one’s “lama”, or “teacher”.

While Western film audiences may have woken up later to Lunana than other category contenders, its nomination signifies a historic moment for Bhutan. Dorji’s movie is only the second Bhutanese film to ever be submitted for consideration – after 1999’s The Cup, by Dorji’s own “lama” Khyentse Norbu. Not for want of trying though. Lunana was the government’s official submission in 2020 as well but, Dorji tells The Independent, it was rejected on a technicality. Academy rules mandate that all films not in the English language be routed through their country of origin’s official Selection Committee. However, this autonomous committee loses its validity if the country it represents fails to submit any work over a consecutive five-year period. “And we hadn’t submitted [a film] in over two decades!” Dorji says.

That wasn’t the only administrative hiccup Dorji encountered; the Academy recognised neither Bhutan nor its official language Dzongkha when he tried to resubmit his film in 2021. “[The Oscars] essentially had to update their entire website,” he chuckles, looking back on Lunana’s uphill climb. And while it may have been harder to traverse than Dorji had originally imagined, his debut film is proof he’s not easily intimidated. “Even to this day, [Lunana] has neither electricity nor network connectivity,” he says, outlining some of the technical challenges of making a “solar-powered film set in the world’s most remote school and surrounded by Himalayan glaciers.” Not to mention the altitude sickness.

Now, all that’s left to do for the Indian-born Bhutanese filmmaker is enjoy Lunana’s success – without what he calls an “unrealistic” expectation of winning the tiny Himalayan kingdom its first Oscar, too. “This is really for the journey rather than the result,” he says. Up against Paulo Sorrentino’s The Hand of God, Danish animated feature Flee, Ryusuke Hamaguchi’s Drive My Car, and Joachim Trier’s The Worst Person in the World, he says it feels “surreal” to be competing with “four of the most accomplished directors” in the world today. Acknowledging Bhutan’s poor Oscars track record, Lunana’s shoestring budget, and a nascent local film industry, Dorji good-naturedly adds, “I’m not supposed to be here!”

While reviews of Dorji’s film have been largely positive, Japan’s landmark Best Picture hopeful Drive My Car is the favourite to win Best International Feature – and for good reason. Hamaguchi’s on-screen reimagining of Haruki Murakami’s eponymously titled short story is also nominated for two additional categories – Best Director and Best Adapted Screenplay. It means that Drive My Car joins a short list of six international films (financed outside the United States) which have received Oscar nods in the same categories. Five of these six have won the Oscar for best non-English language film.

Win or lose, however, Dorji says he intends to celebrate his movie with the residents of Lunana, many of whom also acted in the film. In a separate interview, the director revealed that a lack of trained Bhutanese actors has often proved a hindrance to the country’s filmmakers. However, after a year-and-a-half of training, the children of Lunana were able to deliver such authentic performances that Dorji felt he’d lucked out. Now he wants to share his success and good fortune with the people that accompanied him on the road to the Oscars. “I promised [the residents of Lunana] that we would bring the film back for them to watch,” he explains. “I think screening it for Lunana’s locals would bring my film full circle.”