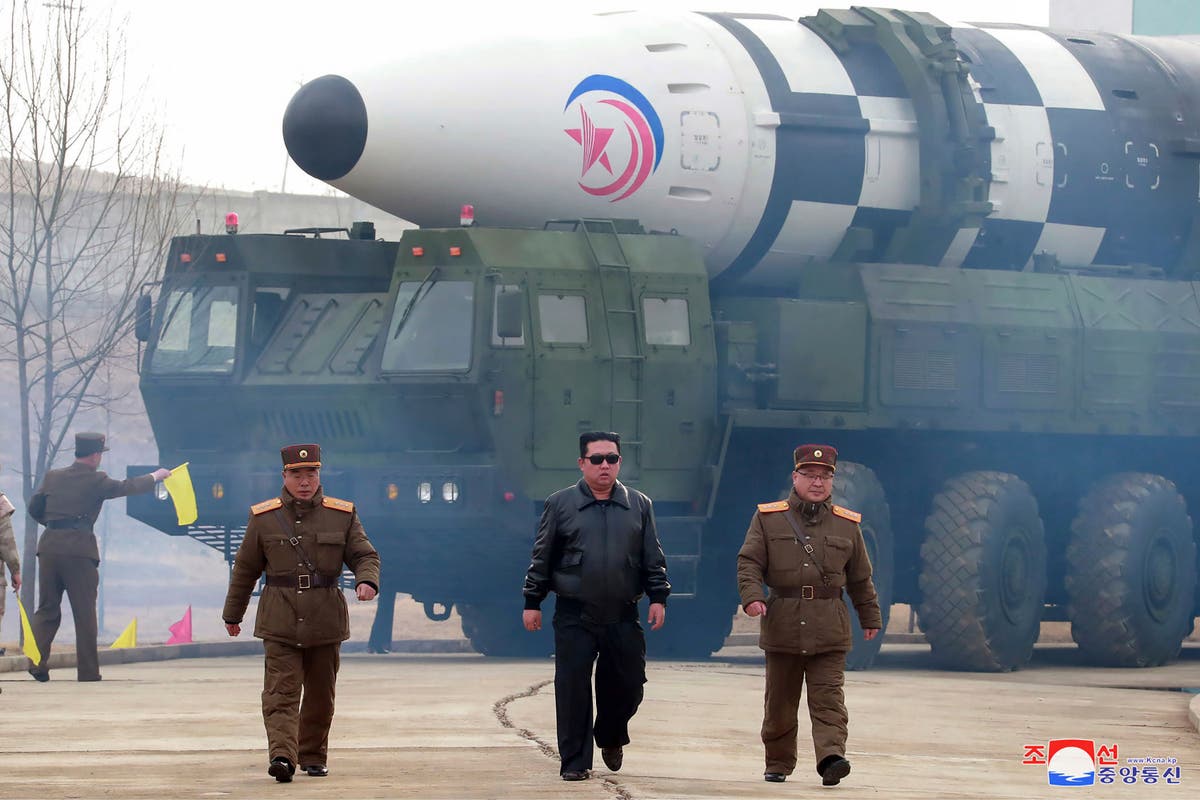 North Korea’s leader Kim Jong-un laughed and clapped while overseeing the test launch of his country’s biggest-ever intercontinental ballistic missile (ICBM), according to a remarkable series of images published by his state-run media.

The test followed through on Mr Kim’s earlier promises to break his self-imposed moratorium on ballistic missile and nuclear tests.

Mr Kim said the Hwasong-17 test, carried out on Thursday, was to make the “whole world clearly aware” that the North had upgraded its nuclear arsenal and is ready for a “long-standing confrontation” with “the US imperialists”, North Korean state media said.

The Hwasong-17, which was first unveiled at a military parade in 2020, is a powerful ICBM that is about 82ft long and is the world’s biggest road-mobile ballistic missile system. Analysts estimate it has the potential to hit target nearly 15,000km away.

It is the country’s longest-range weapon and “could be operated quickly during wartime conditions,” according to state-run news agency KCNA, that added that the test on Thursday met its technical objectives.

One of the images released by Pyongyang’s media showed Mr Kim sporting dark shades and a crisp black suit, flanked by two of his military officers, walking away with the launcher-bound Hwasong-17 in the background.

KCNA also published other photos of Mr Kim that showed him cheering on the successful test along with his two military officers.

“All the defence scientists, who came to enjoy the greatest love and trust under the care of the General Secretary at a significant moment of strikingly demonstrating the tremendous strength of the country to the world, pledged to develop more invincible nuclear attack means for the country,” KCNA said.

Mr Kim said the North Korean military will continue to acquire “formidable military and technical capabilities unperturbed by any military threat and blackmail and keep themselves fully ready for a long-standing confrontation with the US imperialists.”

Ankit Panda, the author of Kim Jong-un and the Bomb and senior fellow at Carnegie Endowment for International Peace, told BBC News that this was a “significant milestone” for North Korea’s nuclear arsenal.

“This test was long telegraphed and continues North Korea’s efforts to improve its nuclear deterrent,” he said.

Japanese officials said that the missile flew to a maximum altitude of more than 6,000km, something corroborated by North Korea.

The massive ICBM test launch has been viewed as a major escalation by the UN, the US, and the North’s neighbours. The US called the test launch a “brazen violation” of the UN Security Council resolution.

Japanese foreign minister Yoshimasa Hayashi said he talked with his South Korean counterpart Chung Eui-yong over the phone and both agreed to “strengthen bilateral cooperation against the North Korean threat” and seek further UN Security Council actions against Pyongyang.

Meanwhile, China has called for dialogue and to keep “peace and stability” in mind after the test was reported.

Wang Wenbin, the country’s foreign ministry spokesperson, said: “We hope all sides will bear in mind the overall interest of peace and stability on the Korean Peninsula, adhere to the right direction of dialogue and consultation, and jointly advance the political settlement of the peninsula issue.”