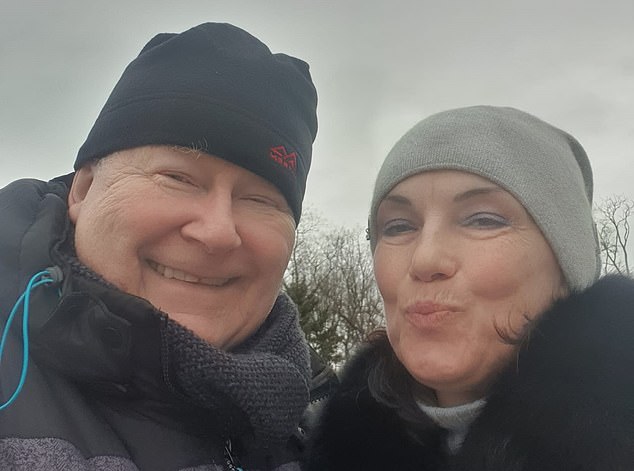 A British man has escaped from the devastated city of Mariupol by walking to Russia after becoming trapped with his wife for almost a month in ‘hell on earth’.

Charlie Gilkeson, 68, a lecturer from Yorkshire, said the couple felt ‘very, very lucky’ after surviving the ferocious fighting for control of Mariupol, the key Ukrainian port, which has been blown apart and left blazing by weeks of relentless Russian bombardment.

‘It was just explosions everywhere,’ he said. ‘You could not walk anywhere. Every explosion could be your last moment on earth. Every second could be your final one alive.’

Charlie Gilkeson, 68, is a lecturer from Yorkshire who walked from Mariupol to Russia on foot alongside his Russian wife, pictured on the right, fleeing deadly shelling from Putin’s army

One month after the war began, Mariupol now encapsulates the horrors of the invasion.

Satellite images show a ruined landscape with burning buildings and destroyed homes, yet almost 100,000 people remain in what the local council have called the ‘ashes of a dead land’.

Mr Gilkeson, whose wife Iryna comes from the city once home to almost half a million people on the Sea of Azov, said their experiences were beyond belief. ‘I’ve seen things I never expected to see in my life – the noise, the devastation, it’s all just horrendous.’

The photo shows the city of Mariupol that housed 450,000 people before the Russian invasion

He told the Daily Mail about buildings riddled with bullets, chopping down trees for cooking on open fires, fetching water from the river, seeing looting from shops and – above all – the endless explosions that have left bodies littering the streets.

Thousands of civilians remained trapped in Mariupol yesterday as Russia was accused of capturing relief workers and the ravaged city came under naval attack.

Ukrainian President Volodymyr Zelensky said in a video address: ‘There are about 100,000 people in the city, in inhumane conditions, in a complete blockade.

‘No food, no water, no medicine. Under constant shelling… constant bombing.’

‘One of the humanitarian columns was simply captured by the occupiers on the agreed route,’ he said. ‘SES [State Emergency Service of Ukraine] employees and bus drivers were taken prisoner.’

The Pentagon said Russia is using long-range missiles fired from ships in the Sea of Azov.

There was speculation that Moscow plans to use the port to move troops.

‘Unlike the rest of the city, the port suffered relatively little bombing,’ a senior official said.

Mr Zelensky said 7,000 people were rescued on Tuesday, as a survivor of last week’s theatre bombing which left 1,300 feared buried described ‘heart-breaking scenes’ of a mother trying to reach her child while another screamed, ‘I don’t want to die’.

‘People have lost their city – and for what? It’s so sad. We were lucky to get out alive but I’m so sorry for all the people who gave their lives.’

I met Mr Gilkeson, a lecturer in engineering at Wakefield College, in a Mariupol cafe last month.

After hearing me speak English, he came over to say hello before telling me that he had taken some time off work to renovate their flat in the city.

‘I came here to get over stress and then walked into a possible war,’ he said, although like many people, the academic was sceptical over the talk of invasion.

A few days later, the couple both caught Covid.

Then on the day war broke out, he texted to say their plan to fly back to Britain the following week had been wrecked after all flights were cancelled and Russian military invaded Ukraine.

‘I have no choice but to sit it out. A huge explosion this morning and food shortages as you would expect,’ Mr Gilkeson texted the next day.

Then there was silence, despite my calls and texts.

I feared the worst – like his son Carl, a lecturer in aerospace engineering at Leeds University, who told his father that ‘he’d said goodbye twice since he thought we were dead’ after they lost contact for two-and-a-half weeks.

But yesterday Mr Gilkeson turned up in the Russian port of Taganrog after walking through the fighting into the self-declared People’s Republic of Donetsk with some others sheltering in a basement underneath a college of marine engineering.

‘I said to my wife “that’s it, we’re going” and we walked out of Mariupol. It was a long way – I’ve got blisters on my feet, so I can hardly walk at the moment.’

He said the hardest part was the first hour and twenty minutes as they shepherded children in their party to the port from the city centre: ‘You had thousands of gunshots and explosions going off.’

‘You had to learn to fall flat on your face. We tried to keep as near to the buildings as possible, but bear in mind there were huge amounts of sheet glass falling all around you that could kill you anyway. But we just had to do it.’

This was the culmination of the couple’s nightmare weeks in Mariupol, staying in their flat for as long as possible – despite seeing windows blown out and losing power on March 1 – before moving into the college basement.

‘If you are in the basement and the building comes down, there is no way out. If you are upstairs and there is an explosion, you are also dead. But I decided I would rather be outside than trapped in a concrete bunker.’

Led by a neighbour, the local residents organised themselves by cutting down trees for firewood, starting with the dead ones.

‘There are no trees left in Mariupol – they were all cut down for people to cook food,’ said Mr Gilkeson.

‘But there is no water, no food, no gas. We had to go to the river to get water to flush the toilet. Drinking water was very difficult to find. You had to boil water on fires.

‘When people could not get food and water, they were breaking into all the shops.’

He praised the ‘incredible’ spirit of the people, although he admitted their feeling of isolation was intense after losing contact beyond the besieged city.

‘In the modern world without any connectivity you feel completely lost,’ he said.

Eventually, assisted by a local woman who spoke English, they found a spot with an occasional phone signal and Iryna managed to get a message to their families via a friend in Kyiv that they were alive. ‘Everyone was just amazing,’ he said.

Mr Gilkeson, who plans to write a book on his experiences and analysis of the war’s causes, said rumours of possible humanitarian corridors and ceasefires left them on an emotional rollercoaster.

He was also critical of the Azov battalion, a former militia that is now part of the Ukrainian army: ‘Some of them were drunk. People on our block had Azov shooting at anything, using local people as human shields.’

But he said soldiers and citizens on both sides assisted their escape through an area seized by Russian forces.

The couple spent a night in a school, then two more in a cinema in the so-called Donetsk People’s Republic before they crossed into Russia.

‘I must admit there were one or two raised eyebrows when I went into Russia,’ Mr Gilkeson said. ‘They were thinking why is the crazy Englishman trying to get into Russia, because everybody was going West.

‘But I used my gut instinct. I know ordinary Russians, I’m married to one, so I went the other way – and so far it has worked.’

Dead bodies are put into a mass grave on the outskirts of Mariupol, Ukraine, Wednesday, March 9, 2022, as people cannot bury their dead because of the heavy shelling

After arriving in Russia, the couple – wearing the same clothes that had been on their bodies for 24 days and nights – discovered problems changing their money in the sanction-hit country, but managed to find sufficient funds to reach St Petersburg.

‘We went into a cafe. Obviously we were filthy. This guy came up and said “are you from Mariupol?”.

We said yes. He gave us about 1,000 roubles and said he was so sorry Mariupol had gone. As soon as he said that, it hit Iryna hard and she broke down,’ Mr Gilkeson said.

His wife’s sister remains in the city, although the couple have been unable to make contact with her.

‘There were fantastic people in Mariupol and it was a fantastic city,’ he says. ‘But now it has all been destroyed.’