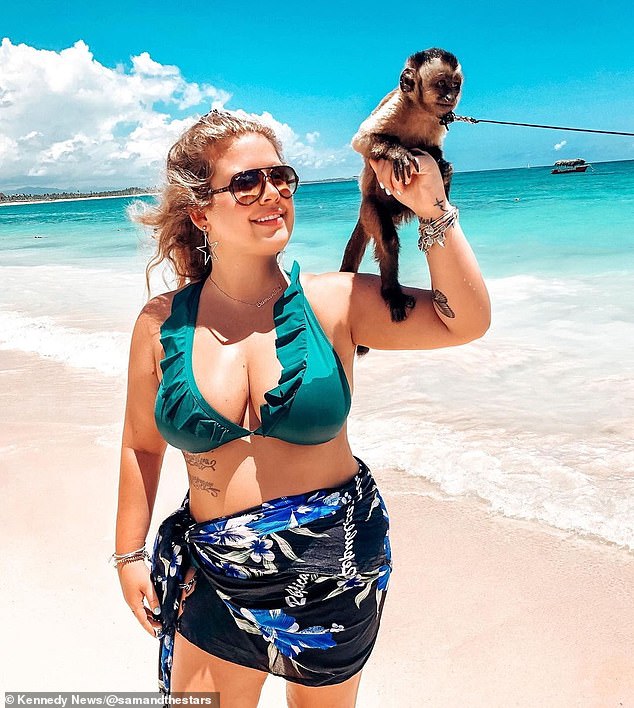 A sleazy singleton accidentally sent his Bumble date a text intended for his friend in which he branded her a ‘solid 4/10’ who looked like ‘an easy lay.’

Samantha Burroughs, 25, from Tuscaloosa, Alabama, was devastated to find out that the man she was set to meet, known only as Jake, had been ridiculing a photo of her in a bikini to a friend.

Sharing the messages he sent in error on TikTok, she told her followers that he’d rated her a ‘solid 4/10’ and that he was only taking her out as an ‘easy lay’, saying: ‘desperate times call for desperate measures’.

Health care worker Samantha Burroughs, from Tuscaloosa, Alabama, thought her Bumble match was ‘respectful’ in early exchanges but discovered another side to his personality after he sent her a text in error – ridiculing her bikini photo to a friend

The 25-year-old took revenge by posting about the messages, which called her an ‘easy lay’, on her TikTok account, garnering supportive messages from those who saw them

Initially, the singleton said she was dazzled by his sweet messages, after he expressed how ‘lucky’ he felt to be meeting her that night.

However, the 25-year-old’s ‘jaw hit the floor’ when he followed the apparent smitten adulation by accidentally sending her a bikini picture of herself alongside a ‘belittling’ text mocking her.

He added that he was going to keep his date with Samantha ‘on the low’ and ended the message by boasting ‘all I saw was t*** and an easy lay’.

A second message followed shortly after to Samantha, in which he attempted to cover up the blunder, claiming: ‘I didn’t mean to send that to you’ and ‘I was talking about someone else’.

Samantha refused to reply – and stood up her date – and is baffled at how Jake switched from messaging so courteously to so ‘childishly’ in the messages.

After receiving the messages ahead of her date, Burroughs stood up ‘Jake’ and took her revenge on social media – her post has now been liked more than 1.5million times

Unlucky-in-love Samantha, who has been single since January 2021, claims she’s been in  ‘terrible’ and ‘toxic’ relationships since her teens

She then exposed his cold-hearted blunder on TikTok where her video has now been viewed more than 1.5 million times, with users seething at Jake’s message.

He’s since text her claiming the message was ‘a joke’, demanding she take the TikToks down to avoid men thinking she’s ‘crazy’ – and adding ‘he just doesn’t find fat girls attractive’.

Samantha said: ‘The comments about ‘desperate times’, ‘beggars can’t be choosers’ and ‘easy lay’ – they sucked. It belittled me and it was childish.

‘He went from being really respectful and having really good grammar to talking like he was a high school boy. It’s amazing how men can totally deceive you. It seemed like two totally different people.

THE VERY AWKWARD EXCHANGE BETWEEN SAMANTHA BURROUGHS AND HER BUMBLE MATCH

Samantha: ‘Thank you. That’s sweet. Yeah, that should be fine.’

Jake: ‘I’ll be coming straight from work so you’ll have to look over my work uniform.’

Samantha: ‘Haha, no worries. I’m in scrubs so I understand.’

Jake: ‘I’m sure you look beautiful either way. I’m a lucky guy to get to take you out.’

At 3.59pm Jake sent a photo of Samantha in a bikini that she’d shared on dating app Bumble:

Jake: ‘No bro, she’s a solid four and I would for sure keep it on the low, but desperate times call for desperate measures and beggars can’t be choosers.

Jake: ‘Damn. I’m sorry I didn’t mean to send that to you… I was talking about someone else and clicked her picture by accident. My bad.’

‘When I saw him send the photo, I thought he was going to say something perverted and sexualise my body and ruin the whole thing, but then I read the text and I just didn’t know what to say.

‘Initially I was very shocked. My jaw hit the floor then I was laughing a bit because It’s so typical of my luck with men. I didn’t reply with anything because I didn’t know what to say.

‘The number [rating] didn’t get to me as much because I don’t really get how that works, and it doesn’t make any sense.’

It hurt, but I dodged a bullet. I’d rather that happen than we hang out and think it’s going somewhere…

She said Jake was ‘tall, dark and handsome’ and ‘interested in the same things’ so she had high hopes for their relationship.

Samantha explained: ‘My friends told me I should hang out with someone as quickly as I can so I can see what they’re like in person, so I thought he was great because he was trying to do that.

‘He was very quick to jump to texting and wanting to hang out because he wasn’t on Bumble too much, and I wasn’t either.

‘He sounded very respectful and seemed like he was appreciative of my time.’

Jake appeared to want to get to know her personality too, something that impressed her but she now realises he wasn’t genuine and says she’s relieved she found out the truth.

She said: ‘It hurt, but I dodged a bullet. I’d rather that happen than we hang out and think it’s going somewhere, then realise he’s using me for sex or something like that.’

Samantha, who has been single since January 2021, claims she’s been unlucky in love and has had ‘terrible’ and ‘toxic’ relationships since her teens.

Her TikTok has been liked more than 1.5million times with more than 25,000 comments offering her support and slamming Jake for his hurtful misstep.

Samantha said some people had even claimed that the man could have done this to her ‘on purpose’ from someone wanting simply to be mean.

User actwin66 commented: ‘Did he think his attempt of saving the situation was somehow better?’

Samantha replied: ‘Right? I wouldn’t be okay with someone talking about anyone that way.’

Ginna Cranston said: ‘Honestly to me instant love bombing and compliments like that are a huge red flag.’

Morgan Jean added: ‘You’re so beautiful! We love it when the trash takes itself out.’