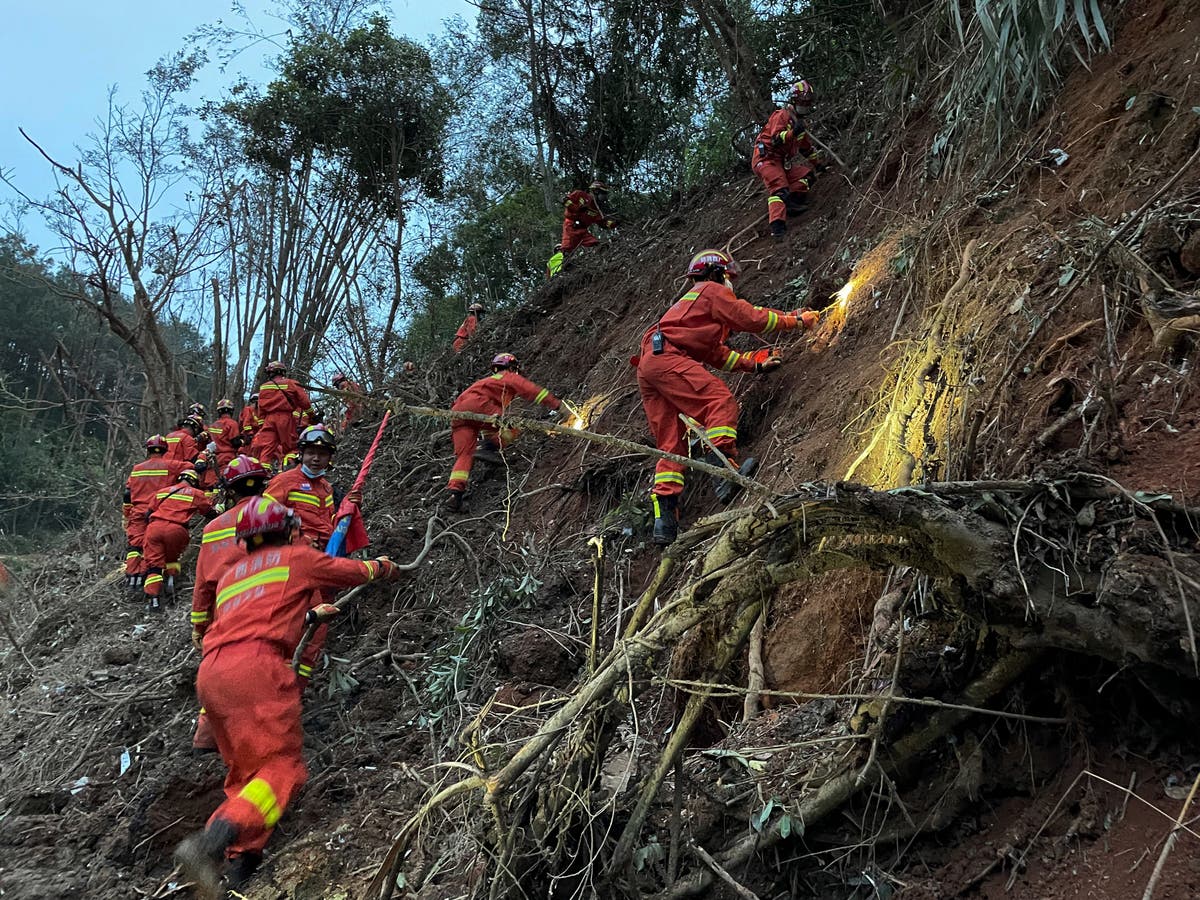 The search and rescue operation was temporarily suspended on Wednesday due to rain.

So far no survivors have been found after a plane carrying 132 people crashed in southern China, authorities said on Tuesday night.

“As of now, the rescue has yet to find survivors. The public security department has taken control of the site,” Zhu Tao, director of the Office of Aviation Safety at the Civil Aviation Authority of China, said at a news conference.

A witness described seeing the jet nosedive and hit the ground – while another heard a bang “like thunder”. It is one of the country’s worst air disasters in years.

One woman said six of her family members and friends had been on the flight. They were on the way to a funeral. “I feel very anguished,” she said.

Smoke could be seen rising from a mountainside near the city of Wuzhou, Teng county after the Boeing 737-800 dropped 30,000ft in two minutes.

Bereaved relatives of the people onboard the Boeing 737-800 aircraft visited the crash site on Wednesday amid downpour.

Among them was a retiree surnamed Zhang from Shenzhen whose nephew was on the flight. “I hope the country can thoroughly investigate this matter and find out whether it was the manufacturer’s fault or it was a maintenance problem,” Mr Zhang told Reuters.

China, one of the world’s top three air travel markets, has drastically improved safety since a string of deadly crashes in the 1990s and 2000s.

The crash of a China Eastern flight comes after years free of major air disasters. The country has not reported a crash of a commercial flight with more than five fatalities since 2010.

China Eastern is one of the four major state-owned carriers in China. Founded in 1995, the airline has a fleet of 749 aircraft, including 291 from the Boeing 737 series.

Several locals from Guangxi Zhuang Autonomous Region have volunteered to deliver tents, food and other relief supplies to the site by motorcycle to aid the rescue team looking for survivors and the aircraft’s black boxes.

On Tuesday, local villagers drove over 40 kms to bring bottled water and food to the rescue team, Global Times reported.

China has deployed drones to search for more evidence in an area of nearly 680,000 square metres around the site of the plane crash.

“The drones’ thermal imaging function will help locate the black boxes,” Zhang Xueliang, one of the rescuers, was quoted by state broadcaster CCTV as saying.

Rescuers are still making an all-out effort to retrieve the black boxes of the passenger plane that crashed in China’s Guangxi Zhuang Autonomous region on Monday afternoon, an official said on Tuesday night.

The severe damage to the plane has made the investigation difficult, said Zhu Tao, head of the Civil Aviation Administration of China safety office.

He added that the investigation team is carrying out a probe in “accordance with the procedures, with rescuers exploring the crash site and going all out to search the black boxes”.

Rescue operations were temporarily stopped due to rain on Wednesday. According to local media, so far no survivors have been found and the cause of the crash remains unclear.

Rain water was filling the depression in the soft soil caused by the impact of the crash, and there were risks of landslides that could endanger rescue workers scouring the difficult, heavily forested terrain, state television reported.

China Eastern Airlines says it has reached out to the families of all 123 passengers who were onboard when the aircraft crashed on Monday.

That’s all from The Independent tonight.

We will bring you more on this tomorrow as we hear it.

Latest pictures from the search

The search continues in the hills of Guangxi.

No survivors have been found of the 132 onboard the Boeing 737-800 that crashed yesterday.

Rescue teams are hoping to find the plane’s black box, which could help experts determine the cause of the crash.

Sky News and CNN have been showing this footage that appears to show the China Eastern plane nosediving before crashing yesterday.

The footage was captured by a nearby CCTV camera, reports say.