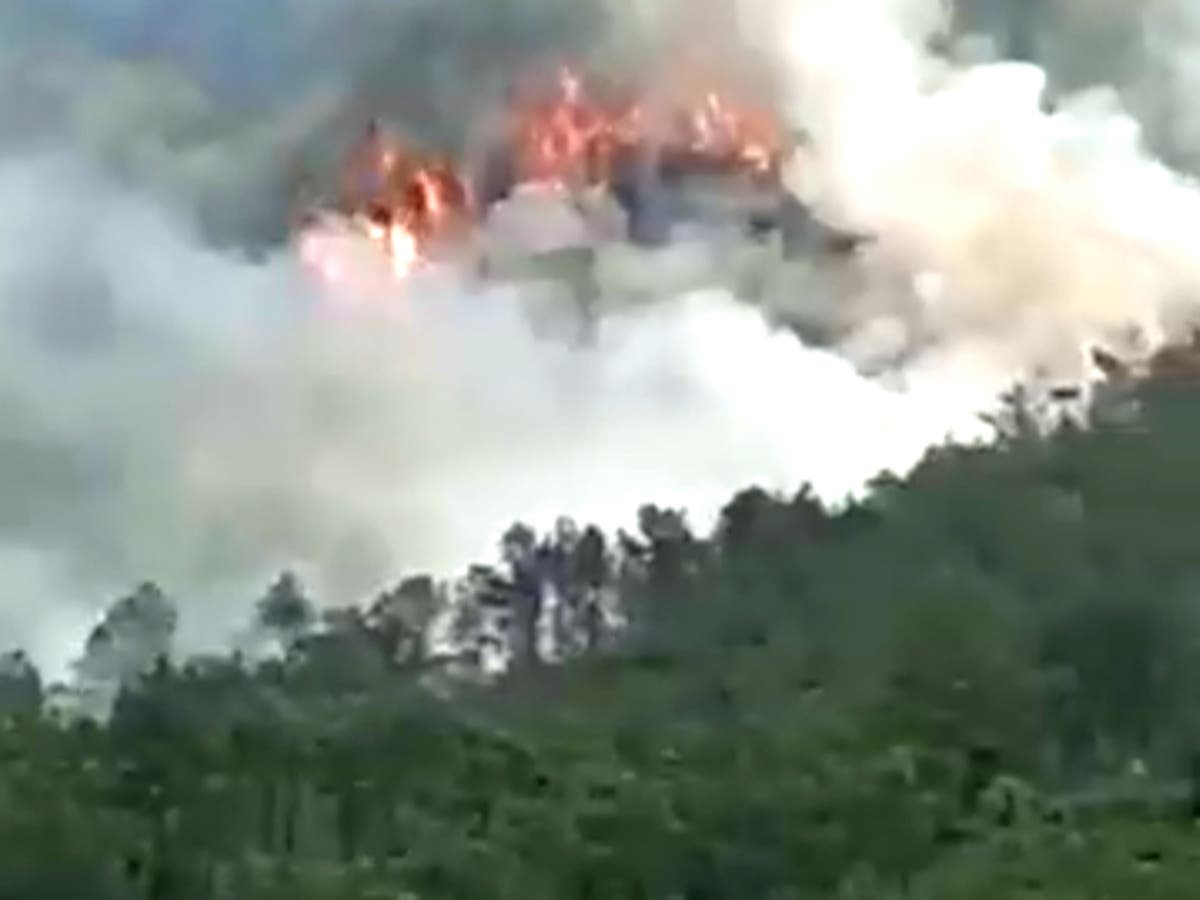 China’s state broadcaster announced on Tuesday that no survivors have been found even as rescuers continued to search the wreckage of a China Eastern plane carrying 132 people that crashed the previous day.

China Eastern has grounded its entire Boeing 737-800 fleet after the crash, which is being seen as the country’s worst air disaster in more than a decade.

The passenger plane went down in a mountainous region in southern China.

Smoke could be seen rising from hills near the city of Wuzhou, in Teng county, in the province of Guangxi, after the Boeing 737-800 plummeted 30,000ft in two minutes.

CCTV reported on Tuesday morning, around 18 hours after the crash, that “wreckage of the plane was found at the scene, but up until now, none of those aboard the plane with whom contact was lost has been found”.

President Xi Jinping ordered an immediate investigation into the crash, and officials said the country’s vice-premier is overseeing the search and rescue operation.

India has decided to put Boeing 737 fleets of Indian carriers on “enhanced surveillance” after the China Eastern Airlines plane crash.

The Directorate General of Civil Aviation (DGCA) announced on Tuesday that SpiceJet, Vistara and Air India Express, which have Boeing 737 in their fleets, shall be put on an “enhanced surveillance” in the wake of the devastating crash that is believed to have left all 132 people onboard dead.

“Flight safety is serious business and we are closely studying the situation,” DGCA chief Arun Kumar said, according to Indian news agencies.

About 74 per cent of the 11,800 flights scheduled in China have been canceled on Tuesday, a day after a plane crashed on a mountainside in southern China.

According to VariFlight, a global flight data services company, even some of the busiest domestic flight routes — from Beijing and Shanghai — have been affected by this.

The cancellations come after a Boeing 737-800 plane operated by China Eastern Airlines nosedived in a crash that is believed to have killed all 132 people onboard.

Meanwhile, Flight Master, the Chinese aviation data provider, reported that other Chinese airlines that use the Boeing 737-800 are yet to cancel any of their flights as of Tuesday.

The deadly crash of the Boeing 737-800 in southern China, which is believed to have killed all 132 people onboard, comes as a major setback for the aircraft maker’s efforts in China, renewing concerns about its planes’ safety.

On Monday, the China Eastern Airlines flight plummeted 30,000 ft in two minutes near the city of Wuzhou, in Teng county, in the province of Guangxi region.

It brings back the spotlight on Boeing, which has had a turbulent few years after two of its 737 Max jets crashed in 2018 and 2019, killing 346 people.

The 737 Max crashes in Indonesia and Ethiopia led to the grounding of the fleet for about 20 months.

The Boeing 737-800 that crashed on Monday does not have the equipment that led to the 737 Max disasters.

However, according to data from the Aviation Safety Network, since its launch, 737-800s have been involved in 22 hull-loss accidents that resulted in 612 fatalities.

“What we know is that the crash happened during the cruise phase of the flight, which is comparatively rare even though this phase accounts for the majority of flight time,” Oleksandra Molloy, aviation safety expert at the University of New South Wales told Al Jazeera.

He noted that only 13 per cent of fatal commercial accidents globally between 2011 and 2020 occurred during the cruise phase. “Usually, the autopilot is engaged during this phase.”

On Tuesday, additional teams of rescuers and medical experts arrived at site of the crash in Guangxi region, CGTN reported.

Hundreds of volunteers from neighbouring Yunnan and Guangdong are also reportedly on their way to join the rescue efforts.

A team of rescuers from Wuzhou was the first to reach the site and extinguish the fire caused due to the crash on Monday.

No survivors have been found so far, nearly 24 hours since the crash.

The search for the airplane’s black box is still underway.

Rescue operations in China are underway at the site of the crash on Tuesday, Reuters reported.

State broadcaster CCTV said earlier in the day that no survivors have been found so far.On Monday, a China Eastern Airlines plane with 132 people on board crashed in the mountainous region near the city of Wuzhou in the Guangxi region. All those on board the plane are believed to have been Chinese.

Rescue teams continue to scour the slopes of the mountain in hopes of finding the black box and other parts of the plane that could help experts determine the exact cause of the crash.

On Monday, after the crash, debris from the plane was found strewn all over with belongings of passengers covering the ground.

State media reported that burnt remains of identity cards and wallets were also found at the site.

The flight MU5735 was en route from Kunming, capital of the southwestern province of Yunnan, to the port city of Guangzhou, when it suddenly nose-dived to the ground.

A woman who said six of her relatives and friends were onboard the Chinese Eastern Airlines plane that crashed has lit 100 candles in their memory.

The woman, who was identified by just her surname Chen, planned to attend a burial ceremony in Guangzhou, Guangdong province for her six family members and friends who died in the crash on Monday, Global Times reported.

Chinese president Xi Jinping has said that he was “shocked to learn” about the tragic incident.

State broadcaster reported on Tuesday that no survivors were found at the site of the crash near the city of Wuzhou in the Guangxi region.

A day after the crash, Boeing China will “cooperate” with China Eastern Airlines and will provide support, the company said on Tuesday.

The Global Times reported that the company is in touch with the National Transportation Safety Board in the United States and has asked its technical experts to aid the Civil Aviation Administration of China in conducting the investigation.

The China Eastern plane, a Boeing 737-800 aircraft, was carrying 132 people when it crashed in hills near the city of Wuzhou, in the Guangxi region.

Even though the black box from the China Eastern 737 is yet to be retrieved, a Chinese aviation expert has said that it is likely that the plane lost engine power and this resulted in the pilot losing control of the aircraft.

Wang Ya’nan, the chief editor of Beijing-based Aerospace Knowledge, was quoted by the Global Times as saying that “it could be a very serious technical failure in which the plane inevitably enters a high-speed descent”.

He however made it clear that the specific cause can only be determined after the black box is recovered and analysed.

The Chinese state broadcaster has reported that there were no survivors found at the site of the crash on Tuesday.

China’s vice-premier Liu He and state councillor Wang Yong have been assigned to oversee the rescue operations in the China Eastern 737 crash that is feared to have killed all 132 people on board.

On Monday, the Chinese premier Xi Jinping had said that he was “shocked to learn” about the tragic incident.

Flight data showed that the plane disappeared from radar two minutes after it suddenly plummeted from an altitude of around 8,869 metres.

State broadcaster reported on Tuesday that no survivors have been found at the site of the crash near the city of Wuzhou in the Guangxi region.

Xinhua reported that there were no foreign passengers on board.

China state broadcaster says no survivors in the plane crash

China’s state broadcaster has said that no survivors have been found in Tuesday’s plane crash.

CCTV reported today that even as the “wreckage of the plane was found at the scene, but up until now, none of those aboard the plane with whom contact was lost has been found.”

The plane carrying 132 people crashed on Monday in the mountainous area of China — and was touted to be the worst air disaster in a decade.

The Boeing 737-800 crashed near the city of Wuzhou in the Guangxi region while flying from Kunming in the southwestern province of Yunnan to Guangzhou along the east coast.

Xinhua news agency reported that the crash created a deep pit in the mountainside.