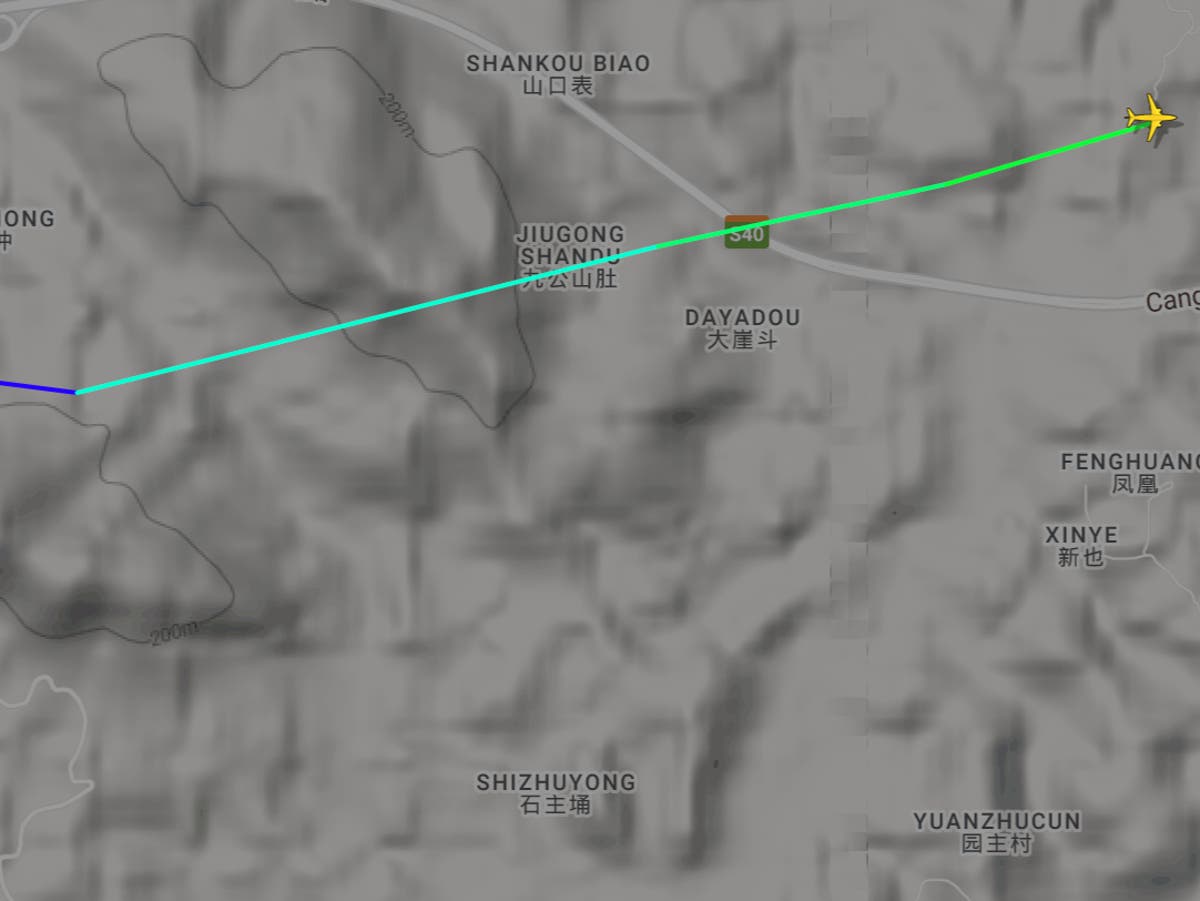 The authorities in China say that a passenger aircraft has crashed southwest of the southern city of Wuzhou. China Eastern, the airline involved, appears to have confirmed the news.

This is what we know so far about the tragedy.

What is known about the flight?

China Eastern flight MU5735 departed normally from the city of Kunming at 1.11pm local time for the two-hour, 665-mile journey to Guangzhou. Reports say 123 passengers and nine crew were on board.

The last data transmitted by the aircraft, as recorded by the tracking service Flightradar24, was at 2.22pm. It indicates the aircraft was losing height at almost 31,000 feet per minute, corresponding to a vertical component of 340mph.

What is known about the aircraft involved?

The Boeing 737-800, with the registration B-1791, was delivered new by the aircraft manufacturer to China Eastern in June 2015. The aircraft type is the predecessor of the Boeing 737 Max.

Earlier on Monday the aircraft had flown without incident from Kunming to Chongqing and back. It was scheduled to land at Guangzhou at 3.05pm and return from there to Kunming at 4.25pm.

What is the safety record of the airline?

China Eastern last suffered a fatal accident in 2004. The airline, based in Shanghai, was set up in 1988. In its first 16 years it was involved in a series of tragedies.

In 1989 a Soviet-made Antonov 24 crashed shortly after take-off from Shanghai on a domestic flight to Nanchang, China, after the right engine lost power. All but six of the 40 passengers and crew were killed.

In 1993, the crew of a McDonnell-Douglas MD11 flying from Shanghai to Los Angeles accidentally deployed the leading edge slats on the wings while the aircraft was in the cruise.

AirSafe.com says: “While trying to correct the initial pitching of the aircraft, the crew put the aircraft through several more oscillations.

“The crew regained control of the aircraft and diverted to a US Air Force base in Shemya, Alaska. All 20 crew members survived, but two of the 235 passengers were killed during these manoeuvres.”

Later the same year, an MD82 overshot the runway at Fuzhou in a rainstorm. Two of the 71 passengers died.

The most serious accident happened in November 2004, when a Bombardier CRJ-200 regional jet crashed shortly after take-off from Baotou on a flight to Beijing. All 47 passengers and six crew died. An investigation found that ground staff had failed to de-ice the wings, causing a loss of lift.

What is the history of the aircraft type?

More Boeing 737 aircraft have been sold than any other type. The two-engined plane first flew on 9 April 1967 and entered service in February 1968.

The aircraft involved in this incident was one of the third generation of the Boeing 737. Production of this series began in 1997, with the last two planes delivered to China Eastern in January 2020.

The Boeing 737-800 is flown widely worldwide, and is the main aircraft type used by Jet2 and Ryanair. The latter is the safest airline in the world, measured by the number of passengers flown without a fatal accident.

Has the 737 been involved in many other fatal crashes?

Yes, as would be predicted from the number of aircraft manufactured. The aviation safety website AirSafe.com lists 83 previous “fatal events” involving the Boeing 737.

The most recent was a crash involving a Boeing 737-500 – the second generation of the aircraft – in January 2021. Sixty-two people lost their lives when Sriwijaya Air flight SJ182 crashed shortly after take-off from the Indonesian capital, Jakarta.

With many thousands of Boeing 737s in service in normal times, it is statistically predictable that a significant number of the very infrequent plane crashes will involve the jet.

Boeing itself publishes data (up to and including 2019) that can be analysed to calculate the number of flights for each fatal accident.

How do those accident rates compare with the corresponding Airbus?

On figures to the end of 2019, the Airbus A320 series (the direct rival for the 737) has a near-identical fatal accident rate to the “New Generation” series of the Boeing jet: one in 12.5 million.