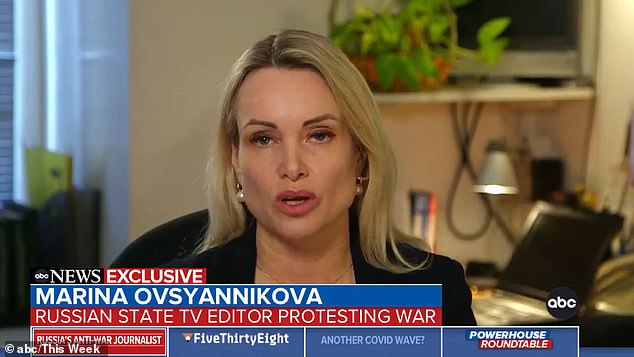 Moscow journalist Marina Ovsyannikova said her decision to go on live state-run TV to decry propaganda was spontaneous and that she wanted to remind the world ‘it’s Putin’s war, not Russian people’s war.’

During her first interview with American media, the 43-year-old journalist also said she did not accept French President Emmanuel Macron‘s offer of asylum because ‘she is a patriot’ and wants to live in Russia, despite fearing for her and her two children’s safety.

‘I want to say to everyone, the Russian people are really against the war,’ Ovsyannikova, branded ‘the bravest woman on TV,’ told George Stephanopoulos on ABC’s This Week. ‘It’s Putin’s war, not Russian people’s war.’

‘[It] was a spontaneous decision for me to go out live on air, but dissatisfaction with the current situation has been accumulating for many years because the propaganda on our state channels was becoming more and more distorted,’ she added.

The journalist had said she was ‘extremely concerned’ after being handed a $296 fine by a Russian court – a mere fraction of the retaliation expected, raising fears that more punishment awaits her.

On Sunday, Ovsyannikova highlighted that the situation in Russia was ‘not black and white,’ and that many ordinary Russian citizen’s are being affected by the sanctions issued by the West.

‘…The severe sanctions that the West is imposing on all of the people is probably a correct decision, but you must understand that not just the oligarchs and Putin’s closest circle are suffering from these sanctions.’

Ovsyannikova said her own 11-year-old daughter had been left starving at school after she was unable to buy her lunch when the credit card she used was blocked.

Ovsyannikova, a worker at Russia’s Channel One, held a placard reading ‘Stop the war. Don’t believe propaganda. They’re lying to you’ during the prime-time news last week

Putin has strong-armed state channels into referring to a ‘special military operation’ instead of a ‘war’ or ‘invasion’, has denied suffering mass casualties, and sought to paint Ukraine as the aggressor with 15 years in jail for anyone who defies him

“The propaganda on our state channels was becoming more and more distorted.”

Russian state TV editor, Marina Ovsyannikova speaks to her protest on live television: “I was hoping that my performance, in a way, would help people change their mind.” https://t.co/q2P3KQgXol pic.twitter.com/xQ7uvkgq0N

Putin has strong-armed state channels into referring to a ‘special military operation’ instead of a ‘war’ or ‘invasion’, has denied suffering mass casualties, and sought to paint Ukraine as the aggressor with 15 years in jail for anyone who defies him.

But Ovsyannikova decided to flout the law last week, storming on to the set of state-controlled Channel One waving an anti-war sign.

A highly regarded employee of the channel, the mother-of-two held a placard reading ‘Stop the war. Don’t believe propaganda. They’re lying to you’.

The journalist said she knew she couldn’t keep working at Channel One and delivering inaccurate and egregious news to Russian citizens.

‘I came to work and, after a week of coverage of this situation, the atmosphere on the first channel was so unpleasant that I realized I could not go back there.’

Ovsyannikova said she thought of assisting an anti-war protest at Moscow’s square – likely referring to the city’s Red Square – but quickly realized being jailed was going to be ‘rather useless.’

‘I decided maybe I could do something else, something more meaningful where I could attract more attention and show to the rest of the world that Russians are against the war,’ she said on Sunday.

‘I could show the Russian people this is just propaganda, expose this propaganda for what it is and maybe stimulate some people to speak up against the war and I was hoping that my performance in a way would help people change their mind,’ she added

Last week, Macron said his country would be willing to give Ovsyannikova diplomatic protection and asylum and would personally raise her case with Putin.

Ovsyannikova, who said she could not eat or sleep after Russia’s distorted propaganda of the war started, also touched on her decision not to leave Russia.

‘I’m very grateful to Mr. Macron for his [asylum] offer, but I have publicly refused to take political asylum in France because I’m a patriot,’ she said.

While she is aware of her country’s ‘dark history,’ Ovsyannikova said she believed it is pivotal for Russian citizens to speak up against Putin’s actions.

Marina Ovsyannikova, a  Russian journalist who hijacked prime-time TV news to denounce the war in Ukraine, has said she is a patriot and does not want to leave Russia

Ovsyannikova had previously said she ‘ absolutely don’t feel like a hero’ after the stunt and did it to ‘open people’s eyes’ – including her own mother who she said has been ‘zombified’ by state propaganda.

The mother-of-two also said she was unsure she would be able to go through with the protest until the last moment, and had to bypass several layers of security to get in front of the cameras with her sign denouncing the war.

‘It was really scary – scary is not even the word for that,’ she said on Wednesday. ‘I wasn’t sure whether I could go through with it right until the last moment.

‘On Channel One – and the main news programme in the country – there are several layers of security, and it’s not that easy to get into the studio.

‘And there’s a member of law enforcement sitting right in front of the studio who makes sure that these kinds of incidents don’t happen. I won’t go into details because it was a loophole in Channel One’s security arrangements.’

She added: ‘The protest had two goals: show the whole world that Russians are against the war, and to show Russian people directly: “Don’t be such zombies; don’t listen to this propaganda; learn how to analyse information; learn how to find other sources of information, not just Russian state television.”

‘I am concerned for my safety, if I’m honest. I’m quite… I believe in what I did, but now I understand the scale of the problems that I’ll have to deal with.’

After the stunt, Ovsyannikova released a pre-recorded video statement calling on ordinary Russians to protest and ‘stop the madness’.

Her exceptional act of defiance against Putin quickly went viral, winning praise from world leaders and sparking calls for her to be nominated for a Nobel Peace Prize.

But once she was arrested, there were fears she would disappear, as many critics of the Kremlin do.

Ovsyannikova, a former editor for Channel One, was fined just $296 by a court over the protest – sparking fears that more punishment could still await her

Her lawyer said he could not make contact with the journalist or find her at the notorious police station she was said to be held in, raising concerns for her safety.

Then Ovsyannikova suddenly appeared at Moscow’s Ostankino district court, where a judge ordered her to pay a $296 fine (30,000 rubles) and released her.

She could have faced a maximum punishment of 10 days in detention for calling for illegal protests.

However, the charge was based only on the video – not her interruption of the news broadcast.

So it is feared that her ordeal is far from over as Kremlin cronies yesterday called for her to be locked up for several years.

Ovsyannikova could still be slapped with the more serious new criminal charge brought in to stamp out ‘fake news’ about Russia’s invasion.

The new law has made it a crime to call the conflict a ‘war’ instead of military operation and carries a jail sentence of up to 15 years.

Or, she could face more serious consequences that have been meted out to those who challenge the Kremlin’s authority directly.

Poisonings and assassination attempts are not uncommon fates among Putin’s critics, with prominent examples including Alexei Navalny, Alexander Litvinenko and Sergei Skripal.

It was said to be gathering evidence against her for ‘knowingly spreading false information’ about the use of Russia’s armed forces.

On the steps of the court after her release, Ovsyannikova, who was previously married to a director at state-controlled Russia Today, revealed that she had been barred from contacting her lawyers during a 14-hour interrogation.

‘It’s been a really difficult day in my life,’ she said, looking very tired.

‘I’ve gone two days without sleep, more than 14 hours in custody, they didn’t allow me to contact those close to me or to receive any legal counsel… so I found myself in a really tough situation.

‘I want to thank everyone for their support,’ Miss Ovsyannikova said, adding that she was too exhausted to answer any more questions and ‘needed to rest’ before she could reveal more.

She had been swiftly detained after interrupting Russia’s most famous anchor, Ekaterina Andreeva, on its main nightly news section, Vremya, which is watched by 250million people.

A friend of the journalist, who was able to bypass security as an employee at the directorate of information programs at the channel, said that she had been planning her protest for days.

Ovsyannikova, whose father is Ukrainian and mother is Russian and is believed to have been born in Odessa, is said to have grown increasingly angry over the bloody invasion.

‘The anger has been building up with her ever since the war started. Two days ago, she told me how she was going to do it,’ the friend told The Guardian.

Pictured: Ovsyannikova’s status as a senior television editor at the station meant she was able to get access to the broadcasting centre, and was not stopped by any armed guards

During his morning video address on Tuesday, Ukrainian president Volodymyr Zelensky thanked the journalist for her brave efforts to tell the ‘truth’.

‘I am grateful to those Russians who do not stop trying to convey the truth… To those who fight disinformation and tell the truth, real facts to their friends and loved ones.

‘And personally to the woman who entered the studio of Channel One with a poster against the war,’ he said.

A pre-recorded video was released after the protest in which she called the events in Ukraine a ‘crime’ and said she was ashamed to work for what she called Kremlin propaganda.

State-controlled Russian media refer to the war as a ‘special military operation’, painting Ukraine as the aggressor, and have been spewing anti-Ukraine rhetoric, including calling its elected government neo-Nazis.

Marina Ovsyannikova, the editor at the state broadcaster Channel One who protested against Russian military action in Ukraine during the evening news broadcast at the station late Monday, leaves the Ostankinsky District Court after being fined for 30,000 rubles

The Kremlin has also blocked social media sites such as Twitter and Facebook in it efforts to control the country’s citizens with its propaganda.

Before her TV career, Ovsyannikova was a competitive swimmer who crossed the Volga river in Russia and the Bosphorus waterway in Turkey.

She graduated from Kuban State University before achieving a master’s degree from Russia’s Presidential Academy of National Economy and Public Administration.

Almost 15,000 people have been detained across Russia during anti-war protests while media outlets and journalists who deviate from Mr Putin’s narrative are being targeted.

One of Russia’s top presenters, Liliya Gildeyeva, 45, was among at least three other journalists to quit their jobs on state-controlled media in defiance in recent days.

She had been the leading anchor on Gazprom-Media’s NTV channel since 2006, where she had worked for more than a decade-and-a-half.

‘At first I left, I was afraid they wouldn’t let me go, then I wrote my resignation letter,’ she told blogger Ilya Varlamov.