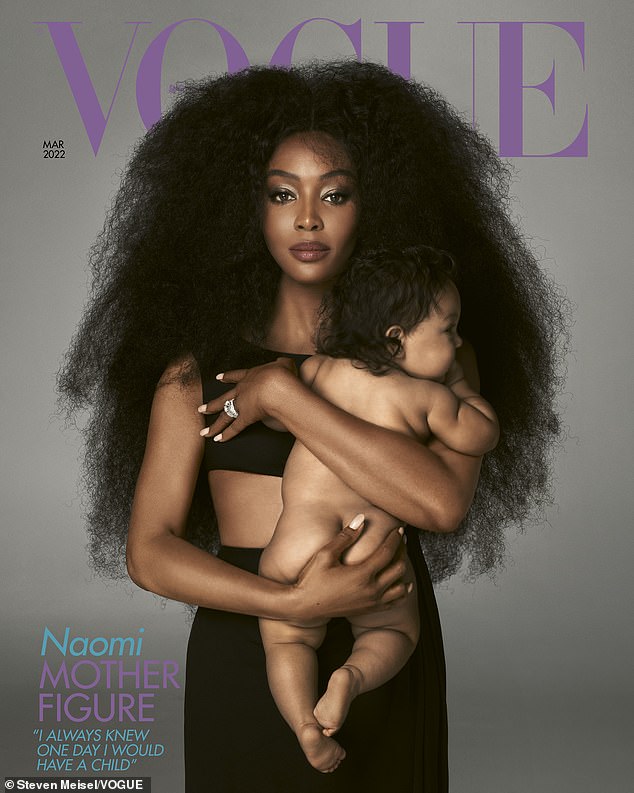 Naomi Campbell has revealed her daughter’s face for the first time in a new interview.

Speaking in the March issue of British Vogue, the supermodel, 51, revealed her daughter – who she welcomed in May – ‘isn’t adopted’ and confirmed to the magazine: ‘She’s my child,’ but refused to share further details.

The doting mother – who has never named the father and was seen on the runway just a month prior to announcing the news without a bump – also gushed that parenthood ‘is the best thing I’ve ever done’.

Mother and daughter: Naomi Campbell has revealed her daughter’s face for the first time in a new interview and confirmed: ‘She wasn’t adopted – she’s my child’

Naomi played coy during the new interview, and despite confirming her daughter is not adopted, refused to elaborate further on her first born.

However Naomi did reveal not many people knew she was planning on becoming a parent and explained: ‘I can count on one hand the number of people who knew that I was having her.’

The veteran runway star added: ‘But she is the biggest blessing I could ever imagine. It’s the best thing I’ve ever done.’

Candid: Naomi revealed not many people knew she was planning on becoming a parent and explained: ‘I can count on one hand the number of people who knew that I was having her’

Elsewhere in her interview, Naomi insisted she still loves modelling, however admitted the older she gets, the more ‘nerve-wracking’ it becomes.

‘I still enjoy it but it’s nerve-racking!’ the mother-of-one explained.

‘Because I’m 51 years old walking with girls who are 18! It’s great to be with these young ‘uns at my age, but I have to say, at one of the shows I was like, ”Come on, girls! Pick up your feet! Why are you walking so slow?”’

She added: ‘I definitely feel like my time was more joyful. We smiled! We got to show off our personalities.’

Of becoming a ‘mother figure to a younger generation of Black models’, Naomi said: ‘There were lots of times when I would walk in the fashion shows, but I was never picked for the ad campaigns and it would hurt – it really hurt.

Gushing: Naomi – who welcomed her first child in May and was seen on the runway just a month prior without a bump (pictured) – gushed parenthood ‘is the best thing I’ve ever done’

Naomi announced she is a mother nine months ago.

The supermodel – who is believed to be single – surprised her Instagram followers at the time when she shared a picture cradling her newborn daughter and stated she has never felt a ‘greater love’.

Offering a first look at her new arrival with a picture of her baby girl, whose name has not been revealed, Naomi penned: ‘A beautiful little blessing has chosen me to be her mother.

‘So honoured to have this gentle soul in my life there are no words to describe the lifelong bond that I now share with you my angel. There is no greater love.’

Model mum: Naomi announced she is a mother in May, four years after crediting science with giving her the opportunity to start a family ‘whenever she wants’

The model gave no further details in the post.

Naomi was last in a relationship with rapper Skepta in 2018 but enjoyed a fling with Liam Payne the following year. he has also enjoyed high-profile relationships with the likes of Diddy, Robert De Niro, Mike Tyson and Russian billionaire Vladislav Doronin over the years.

Although she is notoriously private about her love life, she has previously stated she is ‘on good terms’ with her exes and is not believed to be dating anyone new at present.

Mix up: In 2019 Naomi denied claims she had adopted a child after fans got the wrong end of the stick when she posted a picture cradling a newborn baby on Instagram on Mother’s Day

Naomi kept her baby news a secret from the world, but her mother Valerie Morris-Campbell shared her thoughts on the arrival, saying she was ‘beyond thrilled’.

Sharing the same picture, she posted: ‘Congratulations to my daughter Naomi on the birth of her daughter, I’m beyond thrilled as I’ve waited a longtime to be grandmother. ❤️ @naomi #proud #mother #grandmother #love #family’.

Naomi then commented on the snap: ‘We love you Mum ❤️❤️❤️❤️❤️’

Congratulations! Naomi’s mother shared that she was ‘beyond thrilled’ to become a grandmother after the model welcomed her first child

Naomi’s baby announcement came after she admitted that she would ‘think about having children all the time’ but wasn’t planning to rush herself to start a family.

Speaking to ES Magazine back in 2017, she said: ‘I think about having children all the time. But now with the way science is I think I can do it when I want.’

Asked if she would have the child herself rather than adopt, she replied: ‘Maybe. Maybe… Maybe.’

However, the Vogue cover girl insisted that she did not want to be a single parent so would find a suitable partner first.

She said: ‘I do want a father figure. I think it’s important. It’s the way I feel today, sitting here talking to you.’

See the full feature in the March issue of British Vogue available via digital download and on newsstands from Tuesday 22nd February.

Dating history: Naomi was last in a relationship with rapper Skepta (pictured) in 2018