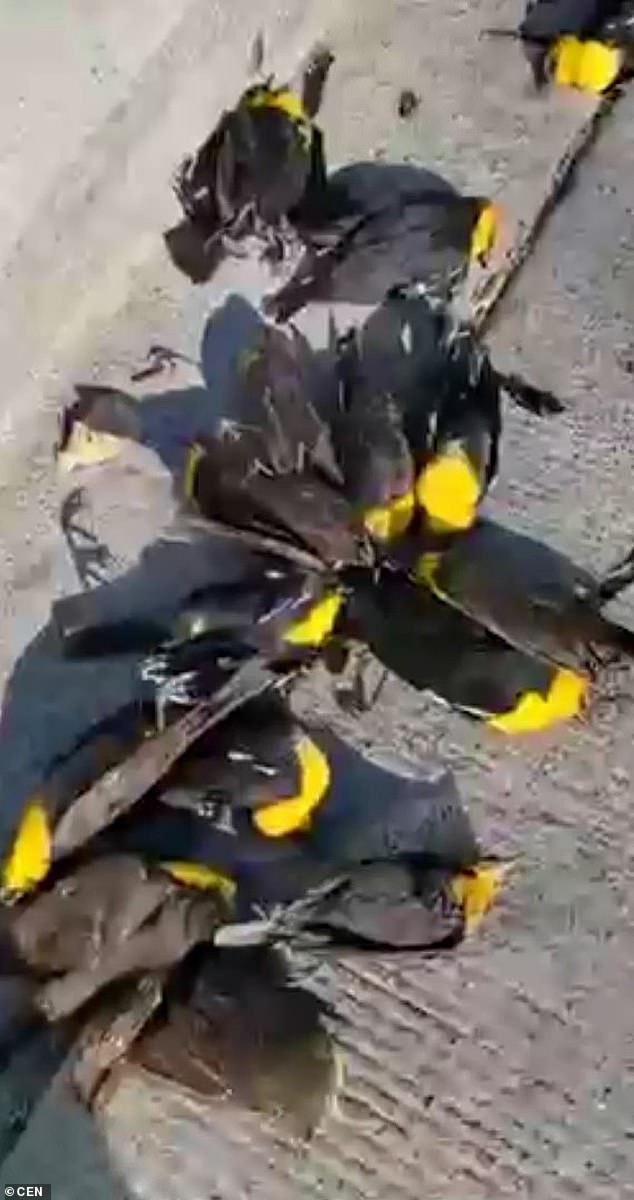 By Kaya Terry For Mailonline

This is the moment hundreds of migratory birds mysteriously dropped from the sky whilst they were mid-flight in Mexico.

Police were called at around 8.30am on February 7 after residents reported the dead birds strewn across the sidewalk in Alvaro Obregon area of Cuauhtemoc, a city in the state of Chihuahua.

Shocking footage, which has gone viral on social media, shows the cloud of yellow-headed blackbirds suddenly dropping to the ground.

Many of the flock are seen flying away but many dozens were left lying dead on the street.

Police were called to the scene at around 8.30am on February 7 after local residents reported the dead birds strewn across the sidewalk in Rubio, a town in the Mexican state of Chihuahua

Footage, which has since gone viral on social media, shows the birds suddenly drop to the ground mid-flight

Local residents began seeing the yellow-headed blackbirds – which travel south to Mexico from Canada in the winter – falling from the sky at around 5am.

Separate video footage, taken the same day, shows the motionless birds lying on a street as someone with a broom sweeps them into piles.

A veterinarian who examined the dead blackbirds suggested they could have died as a result of inhaling toxic fumes, perhaps from a heater, or they could have been electrocuted after roosting power lines that became overloaded.

The dead birds were removed and will be tested to establish their exact cause of death. The investigation is ongoing.

Many viewers on social media have speculated that the incident could be a murmuration that went wrong.

The huge formations form as birds – usually starlings – all fly together and suddenly change direction to confuse predators.

One user wrote: ‘Looks more like the lead birds got confused, the dead birds look more like a result of collision with the surface given that the surviving members of the flock flew back up.’

Another added: ‘A lot flew back up straight away due to pure instinct but many will be injured. So sad. Could this be murmuration?’

One shocked viewer said: ‘This is very apocalyptic!’

Another added: ‘This is incredibly scary and not the first story I’ve read about similar incidents happening across the world.’

Last week a similar incident occurred 5,000 miles away after 200 birds mysteriously dropped dead from the sky in a seaside village in Wales.

Traumatised drivers said it was like watching ‘a horror film’ when the starlings fell to the ground for no apparent reason.

Officials confirmed around 200 starlings had died after being found near the villages of Waterston and Hazelbeach, Pembrokeshire last week

Witnesses said injured starlings were scattered in hedgerows and on the ground and council officers cleared bloodied bird bodies from the road.

Officials confirmed around 200 starlings had died after being found near the villages of Waterston and Hazelbeach, Pembrokeshire.

Bird expert Dominic Couzens, 59, told MailOnline: ‘They were probably startled by something, maybe a loud bang.

‘Something unexpected made them disorientated and then they flew into something.

‘It could be some misadventure. They could have done something daft. They’re not perfect. It’s all speculation.’