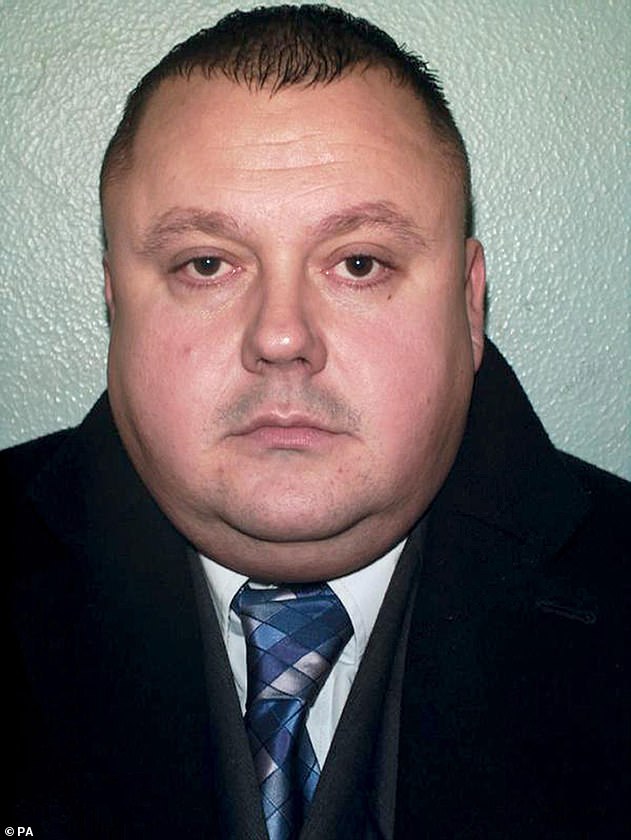 Two new witnesses have come forward after Levi Bellfield confessed to the brutal hammer murders of Lin and Megan Russel, with one claiming she saw him flee the scene in Chillenden, Kent 26 years ago.

In a harrowing four-page statement revealed earlier this week, the serial killer formally confessed to the murders, providing chilling details of the 1996 attack.

Lin, 45, her two daughters, six-year-old Megan and nine-year-old Josie, as well as their dog Lucy, were tied up and savagely beaten with a hammer in the brutal attack.

Only Josie survived, sustaining horrific injuries. The deaths in the picturesque village shocked the nation.

Michael Stone, 61, is currently serving three life sentences after twice being convicted of the Russell murders. He has consistently pleaded his innocence.

Two new witnesses have come forward after Levi Bellfield (pictured) confessed to the brutal hammer murders of Lin and Megan Russel, with one claiming she saw him flee the scene in Chillenden, Kent 26 years ago.

The statement from Bellfield, 53, suggests Stone may have suffered a miscarriage of justice, and is being investigated.

Now, one of the new witnesses – described by The Sun as ‘highly credible’ – has come forward to say she saw Bellfield after Lin and Megan were murdered.

In his confession, the serial killer even wrote that he saw a woman as he drove away from Cherry Garden Lane in a beige Ford Sierra.

‘As I left, I pulled out of Cherry Garden Lane, then out on to another little road where I pulled out in front of the lady,’ he wrote in the statement.

‘I kept looking in the rear-view mirror at her while also checking my face for blood.’

According to The Sun, the witness recognised Bellfield from news reports two years ago, and later picked him out in a virtual identification parade.

Bellfield is currently serving a life sentence for the murder of schoolgirl Millie Dowler.

He has also been convicted of murdering Marsha McDonnell and Amélie Delagrange and the attempted murder of Kate Sheedy, and will never be considered for parole.

The document, seen by The Sun, went into appalling detailing about how Bellfield brutally attacked the family and even killed the family dog after it bit him.

Lin Russell, 45, her two daughters, six-year-old Megan (above with her mother) and nine-year-old Josie, were tied up and savagely beaten with a hammer in the brutal attack in 1996

He has even offered to draw pictures of the crime scene showing where he left the bodies of Lin and her daughter.

Bellfield’s statement said he was wearing a ‘pair of marigold washing up gloves’ and had the hammer in his right hand as he stopped the Russell family along a lane.

He claims that his intention was ‘to just attack Lin’, but quickly changed his mind on hearing the screams, presumably of Megan and Josie Russell.

The 14-paragraph statement then goes into detail about how he led the Russell off of a track before killing them, and then driving back to his Twickenham home before heading off to work.

He claims that the following day he threw the hammer he used to carry out the attacks into the Thames near Walton, Surrey.

The publication reports that Bellfield made the statement to solicitor Paul Bacon, who represents Michael Stone.

He ends the statement by saying it was the first time he had ‘committed a crime and another person has been arrested for it’, before apologising to Stone and the Russell family ‘for my heinous acts’.

Lawyers for Michael Stone (pictured), who is serving three life sentences for the murders of Mrs Russell and her six-year-old daughter Megan, claim he could be a victim of a miscarriage of justice

It is believed the document was sent to the Criminal Cases Review Commission (CCRC) which has the power to investigate alleged miscarriages of justice.

On Monday, Stone’s sister called for an independent police force to probe the murders of Lin and Megan Russell following Bellfield’s ‘astonishing’ confession.

Barbara Stone said she is convinced Bellfield’s admission is ‘absolutely true’ and will finally prove her brother is innocent.

She said: ‘I believe there is a conflict of interest with Kent Police. It has to be done the correct way through the correct legal process.’

Ms Stone said her brother also shares her request to have another force handle the case.

She added : ‘Bellfield has come out with a lot of facts that can be checked including information about the murder weapons.’

Ms Stone, who has campaigned tirelessly for his freedom, said: ‘I don’t believe he would have made this confession if his mother was still alive. This is not just Bellfield chin-wagging.

‘Nobody is going to come out with a statement like that over such a terrible crime.

‘I have believed Bellfield for a long time but never thought he would have the guts to formalise a statement that can be used as evidence.

The two men are both imprisoned for life in the same jail, HM Frankland (pictured)

‘It was a difficult decision on his part I’m sure as he may experience a lot of consequences particularly among his fellow prisoners.

‘He has described his movements that day in great detail how he committed the murder and even what he did with implements used.

‘My heart goes out to the Russell family who have endured endless pain as we seek to prove Mick is innocent.

‘I think it is in all our interests to have this matter investigated when there is a realistic possibility it could bring closure. Bellfield has done this the right way and voluntarily.’

His beloved mother Jean, who always insisted her son was innocent, died of a lung condition in 2017.

Last year it was reported that police had found a piece of evidence which had been lost for 14 years, that lawyers for Stone believe could be used to clear his name.

The item, a long bootlace, was used to tie up one of the victims and was dropped by the killer and later found at the scene by detectives.

A small part of the lace was tested for DNA at the time. But, with the processes still in their infancy, the tests came back inconclusive.

Lawyers for Stone have argued since 2007 for the whole lace to be tested.

However, police have insisted that a large section of the lace no longer exists, having never been returned to police after forensic testing.

Police then reportedly said the lace had been tested to the point of destruction 1998.

According to the Sun, the larger lace section was recently found again – supposedly at a police station. The lace is reportedly being tested by the CCRC.

He was also convicted of the attempted murder of 18-year-old Kate Sheedy.

As well as admitting to murdering Lin and Megan in the 14-paragraph statement, Bellfield, also reportedly admits to the murder of a woman called Judith Gold in North London in 1990.

Stone has twice been found guilty of Lin and Megan’s murders and is serving three life sentences, but no scientific or identification evidence links him to the scene. Pictured: Police at scene in 2001

Shaun Russell, with wife Lin and daughters Megan (second left) and Josie at an Italian restaurant in early 1996

He has previously admitted being in the Chillenden area at the time of the killings.

But his new statement provides new details, and reveals how after the murders he stopped at services on the M25 in Surrey to wash off blood.

Bellfield then tells how he went home to Twickenham got changed and went to work as a nightclub bouncer.

He says the following day he threw the hammer into the Thames near Walton, Surrey.

He then went on holiday to Turkey, but claims he returned to have the beige Ford Sierra he was driving on the day of the murders cleaned, fearing it was full of DNA.

Stone was jailed in 1998 after being convicted of the murders of Ms Russell and her daughter.

However, his police record dates back to 1971 when he was aged 12 and continued into his adult life, serving three prison sentences in the 1980s and 1990s.

Stone has previous convictions for crimes including ABH, robbery, burglary and GBH and was known to carry weapons.

He was sentenced to two years’ in prison in 1981 for attacking a man with a hammer during a robbery.

He then received a four-and-a-half year sentence for stabbing a friend while he slept in 1983, an attack that penetrated the friend’s lung and nearly killed him, and he tried to wound a police officer in the eye after this arrest.

Stone was jailed for a third time and sentenced to 10 years’ imprisonment for two armed robberies in Maidstone and Brighton respectively during the same week in 1986.

He was released from prison in 1993, three years before the Russells were murdered.

The fight to find how killed the Russells: Bellfield and Stone’s criminal careers

1981: His first conviction was for burglary

1990: Convicted of assaulting a police officer

October 14, 2001: Anna-Marie Rennie, 17, was attacked in Hospital Bridge Road, Witton, southwest London. She manages to escape but four years later identifies Bellfield as the man who tried to kidnap her. The jury failed to reach a verdict on a charge of false imprisonment and kidnapping

March 21 2002: Milly, 13, is walking home from school in Walton-on-Thames, Surrey, when she disappears. Her remains are found six months later 25 miles away.

February 2003: Marsha McDonnell, 19, gets off a bus near her home in Hampton after a night out with friends, and is struck three times on the back of the head with a blunt object by Bellfield.

May 2004: Kate Sheedy, 18, is left for dead after Bellfield runs her down in his car after she gets off a bus in Isleworth after spending the evening with friends.

August 2004: Amelie Delagrange, 22, is battered to death by Bellfield after she gets off at the wrong bus stop and is attacked walking across Twickenham Green. She dies of head injuries.

February 2008: Bellfield is convicted of the murders of Marsha and Amelie, and the attempted murder of Kate.

May 2011: Bellfield goes on trial at the Old Bailey after he denies abducting and murdering Milly.

June 2011: Bellfield yawns as he is found guilty of Milly’s murder. The following day he refuses to attend court where he is jailed for life. Bellfield becomes the first person to receive two whole-life terms.

February 2012: Bellfield loses a Court of Appeal bid to challenge his conviction for Milly’s kidnap and murder.

2017: Bellfield allegedly claimed he was behind the murders of Lin and Megan. He later retracted his confession and has never been charged.

2021: Bellfield issues a statement putting himself near the scene of the crimes – but denies murder.

February 2022:  Bellfield has made a formal confession to murders of Lin and Megan Russell. Michael Stone’s lawyer, Paul Bacon, says killer had confessed in a four-page statement with details he claimed only the killer would know.

1981: Sentenced to two years’ imprisonment for attacking a man with a hammer in a robbery.

1983: Stone received a four-and-a-half year sentence for stabbing a friend while he slept and later tried to wound a police officer in the eye after being arrested

1986: He was sentenced to ten years’ imprisonment for two armed robberies in Maidstone, Kent and Brighton during the same week.

1993: Stone was released from prison.

1996: Mother and daughter Lin and Megan ­Russell were murdered along with the family dog as they walked home after a swimming gala around 4pm on Tuesday, July 9, 1996.

1998: Michael Stone was found guilty of the murders and an attempted murder.

2001: Stone faced a retrial after one of the prisoners withdrew the claim against him. But he was found guilty once more and sentenced to three life-sentences.

21 December 2006: A judge decided that Stone should spend at least 25 years in prison before being considered for parole.