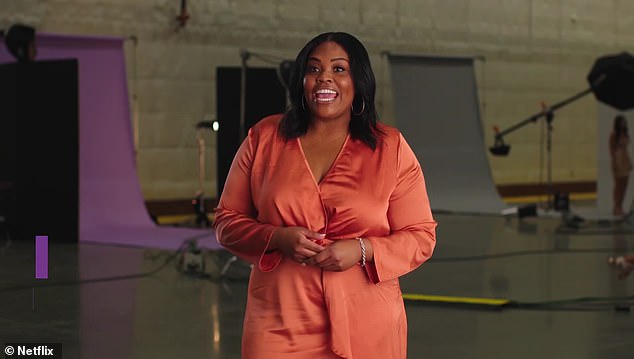 Netflix has come under fire for teasing two plus-sized women in the premiere of its hit dating show Love is Blind’s second series – but then dropping them for the remaining episodes.

After the success of the first series, which aired in 2020, the first five episodes of Love is Blind’s second series were released on Friday.

The popular dating shows sees 30 singletons date in ‘pods’ where they cannot see each other before getting engaged, after which they spend four weeks together and must decide whether they want to go through with a wedding at the end of that period.

Chassidy Mickale, 33, from Chicago, was one of the plus sized women who featured on the first episode of the second series of Netflix’s Love is Blind – but her dating story wasn’t followed. Viewers accused the show of using Chassidy and another plus-sized female contestant to appear diverse

Viewers said they want to know what happened to Chassidy and Hope and that they were disappointed the show does not focus on them more, in spite of teasing them in the first minutes of the new series

Viewers claimed the Netflix show used curvier women to appear more diverse, but that women with conventional sizes were the ones the show focused on (Pictured: a grab from later in season 2 of the show)

The two first episodes focus on the people making connections in the pods, and only the couples who get engaged are featured in the rest of the show.

Two of the female contestants introduced early on in the premiere were Chassidy Mickale and Hope Antoniello, who were both plus sized, leading viewers to believe their stories would be well-featured in the new series.

However, eagle-eyed fans took to Twitter after they realised that Chassidy and Hope, were actually not amongst the 12 contestants the show would be focusing on.

Some accused Netflix of using Chassidy, Hope and other plus sized contestants to appear diverse while the lion’s share of the show focused on conventionally beautiful pairings.

Chassidy, a 33-year-old entrepreneur from Chicago, was the first woman viewers were introduced to on the show.

Walking down the corridor leasing to the Love is Blind pods dressed in a flattering orange dress, she said: ‘My physical insecurities have definitely affected my dating life.

‘This experiment allows me to be judged for who I am as a person versus the physical,’ she added.

Hope also mentioned her weight in a piece-to-camera that was shared within the first five minutes of the show.

Hope Antoniello, 31, was also featured in the first episode, but little was heard from either women on the show after their initial introduction

The show’s first three episodes focus on the ‘pods,’ where men and women talk to each other, but cannot see each other

‘It doesn’t matter what I look like, how much I weight, color, ethnicity, anything you come from, it is who you are inside.

‘And I’m looking forward to what potentially could be discovered in these pods because I do indeed wanna leave here with a husband,’ she added.

In spite of featuring early in the premiere, nothing more was heard from the two women.

Meanwhile, Hasseb Husn was the only plus sized man on the show and little was heard from him either.

They did not connect with the people in the pods, and their blind dates were not shown, leading several fans to voice their disappointment online.

‘Love Is Blind really strolled out two plus size women in the premiere making us think we were going to have diversity…then we never saw them again,’ one said.

‘I’m glad you saw them too, I thought maybe I hallucinated them at this point… damn I was excited,’ said another.

Hasseb, pictured centre, was the only plus size man to be featured on the show, and was not among the couples who got engaged

‘I was so excited for Cassidy and she literally walked in and back out I guess lol,’ another said.

‘I was so excited for the “normal” women and then they were gone,’ one wrote.

‘I was ready to see these men fall in love wit a big girl before seeing her…. den Netflix had other plans,’ one said.

Some also took issue with the fact that several of the female contestants that the show’s second series did focus on talked about losing a large amount of weight and struggling with body image.

In her introduction, Hope said weight, color or ethnicity do not matter on Netflix’s dating show and that she wants to find a husband

Danielle Ruhl, 29, who is paired with Nick Thompson, 36, on the show, admitted she used to be fat as a child, which left her with crippling confidence issues.

And Deepti Vempati, 31, who is paired with veterinarian/DJ Abhishek ‘Shake’ Chatterjee also confessed she lost a lot of weight in the past.

Shake was also heavily criticised by viewers after he asked Deepti if he would be able to carry her on his shoulders in a bid to guess her weight.

This did not land well with viewers, who said the people were presented as less acceptable partners because they used to be fat.

‘And meanwhile we got multiple “I used to be fat, can you ever accept me?” storylines,’ one said.