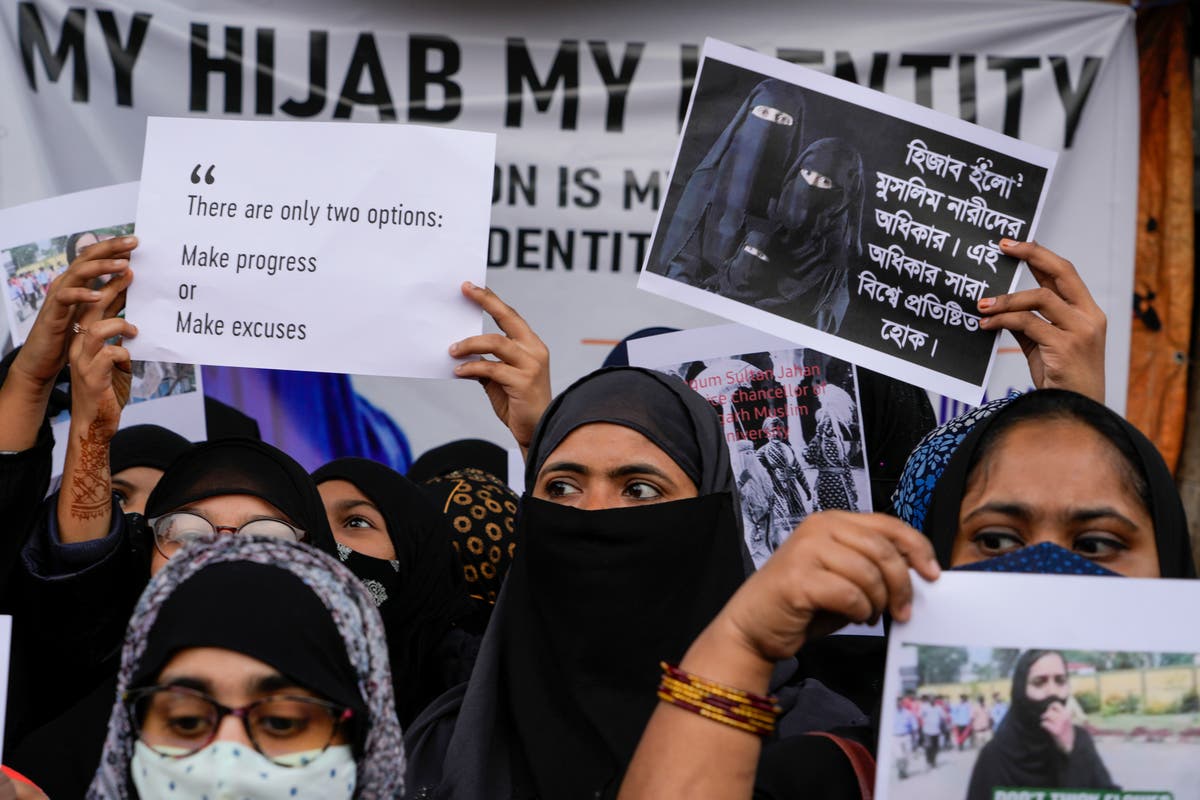 India’s Supreme Court has said it will not urgently intervene in the row brewing in a southern state over whether Muslim girls can wear the hijab in schools and colleges.

In response to several petitions, the country’s chief justice NV Ramana said on Friday that the top court will only take up the matter at the “appropriate time”, with the issue currently being heard in the Karnataka High Court.

The chief justice’s remarks came a day after Karnataka’s top court, in an interim order, said students should not wear religious clothes in colleges until it has reached a verdict on the matter.

“Pending consideration of all these petitions, we restrain all the students regardless of their religion or faith from wearing saffron shawls (bhagwa) and connected matters, scarfs, hijab, religious flags or the like within the classroom,” the high court said in its order. The order only pertains to those institutions where a uniform has been prescribed by college authorities.

It added: “Ours being a civilised society, no person in the name of religion, culture or the like can be permitted to do any act that disturbs public peace & tranquility. Endless agitations and closure of educational institutions indefinitely are not happy things to happen. The hearing of these matters on urgency basis is continuing.

“The interest of students would be better served by their returning to the classes than by the continuation of agitations and consequent closure of institutions,” the court added. “The academic year is coming to an end shortly. We hope and trust that all stakeholders and the public at large shall maintain peace and tranquility.”

On Friday, senior advocate Devadatt Kamat mentioned this interim order in the Supreme Court while requesting an urgent hearing of the petitions challenging the ban on hijab and contended that the order amounts to an effective suspension of the fundamental right to practise religion.

“High court says that none of the students should raise religious identity while going to school and colleges,” Mr Kamat said, according to LiveLaw. “It has far-reaching consequences for other faiths too and not only Muslims. For example, the Sikhs wear turbans. This in effect is complete suspension.”

In response, the chief justice said that the issue need not be brought to the national level.

“I don’t want to express anything. Don’t take it on a larger level. We also know what’s happening in the state and hearing and you also have to think over whether it’s proper to bring it to Delhi,” Justice Ramana said. “Definitely we’ll examine and we’ll have to protect constitutional rights. Mr Kamat, don’t go into merits. Let us see… [at the] appropriate time, we’ll hear.”

The controversy began on 28 December after a government college in Karnataka’s Udupi district banned students from wearing the traditional Muslim headscarves inside the classroom. Six students of the school resisted the ban and were denied entry. The issue reached the state’s high court after one of the students filed a petition challenging the Udupi Women’s PU College’s directive.

The students took to attending classes outside the classrooms but subsequently started protesting over their right to wear headscarves. The protests soon spread to other colleges that enforced similar bans on headscarves.

Some Hindu students and fringe groups then launched a counter-protest, wearing saffron shawls and headdresses. The colour saffron is seen as symbolic of Hindu nationalism. Earlier this week, a video of a Muslim student in a burqa being surrounded and heckled by saffron-clad protesters at a Karnataka college went viral and caused widespread outrage.