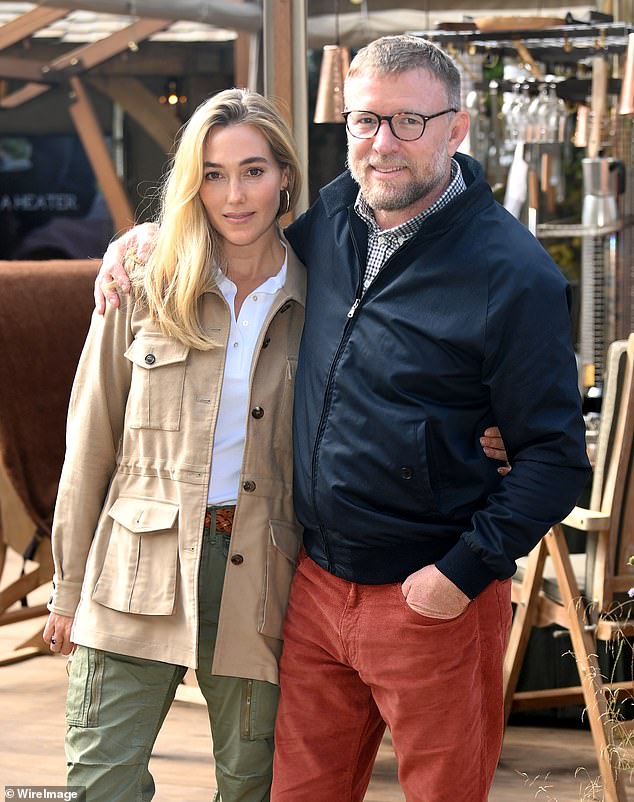 Multi-millionaire film director Guy Ritchie, who is worth an estimated £110million, used the Government’s furlough scheme to pay workers on his 1,134-acre country estate, Mail Online has learned.

Ritchie, 53, who paid himself a £3.2million dividend during the pandemic, has also used the taxpayer-funded subsidy to pay staff at his London pub.

The film director turned country squire claimed up to £40,000 to pay for staff at Ashcombe House, his rural retreat in Wiltshire, which he is developing as a resort for shooting and fishing parties.

Newly filed accounts show that the partnership which manages the estate was worth £26.8million, but was still keen to use the taxpayer-funded assistance to pay some staff.

Guy Ritchie (above, with wife Jackie Ainsley in September), who paid himself a £3.2m dividend during the pandemic, used the furlough scheme to pay workers on his 1,134-acre estate

The film director, who is worth an estimated £110million, has also used the taxpayer-funded subsidy to pay staff at his London pub Lore of the Land (pictured)

That is on top of up to £135,000 furlough claimed by his pub in Mayfair, central London, Lore of the Land, run by Fatboy Pub Company Limited.

Ritchie, 52, received a reported £59million in his 2008 divorce from pop star ex-wife Madonna and his latest film The Gentleman grossed £84million worldwide.

The Lock, Stock and Two Smoking Barrels director also saw the value of his film business Toff Guy Films rocket by £12.7million up to £14million over the 12 months to the end of June 2020.

Paperwork filed last summer also shows that Ritchie paid himself a £3.2million dividend via another of his companies, GSR Holdings.

Following the Madonna spit he married Jacqui Ainsley, 39, and the couple split their time between the in eight-bedroom home in Fitzrovia, London and their 18th-century estate in Wiltshire which was given to Guy as part of his divorce settlement in 2008.

The film director claimed up to £40,000 to pay for staff at Ashcombe House (pictured), his rural retreat in Wiltshire, which he is developing as a resort for shooting and fishing parties

Guy and Jacqui tied the knot in a romantic ceremony at their country estate in Wiltshire in July 2015 after five years of dating.

His pub has been cursed with bad luck – catching fire twice in the last year, last month and the previous June.

Ritchie’s feature film career started with Lock, Stock in 1998, and was followed by others including Snatch, Revolver, RocknRolla, two Sherlock Holmes films and the recent King Arthur: Legend of the Sword and The Gentleman.

His CV also includes Swept Away starring his then wife Madonna which was a box office disaster in 2002.

Other wealthy celebrities who claimed furlough cash to pay staff during the pandemic reportedly include Gordon Ramsay, Jamie Oliver and Tony and Cherie Blair.