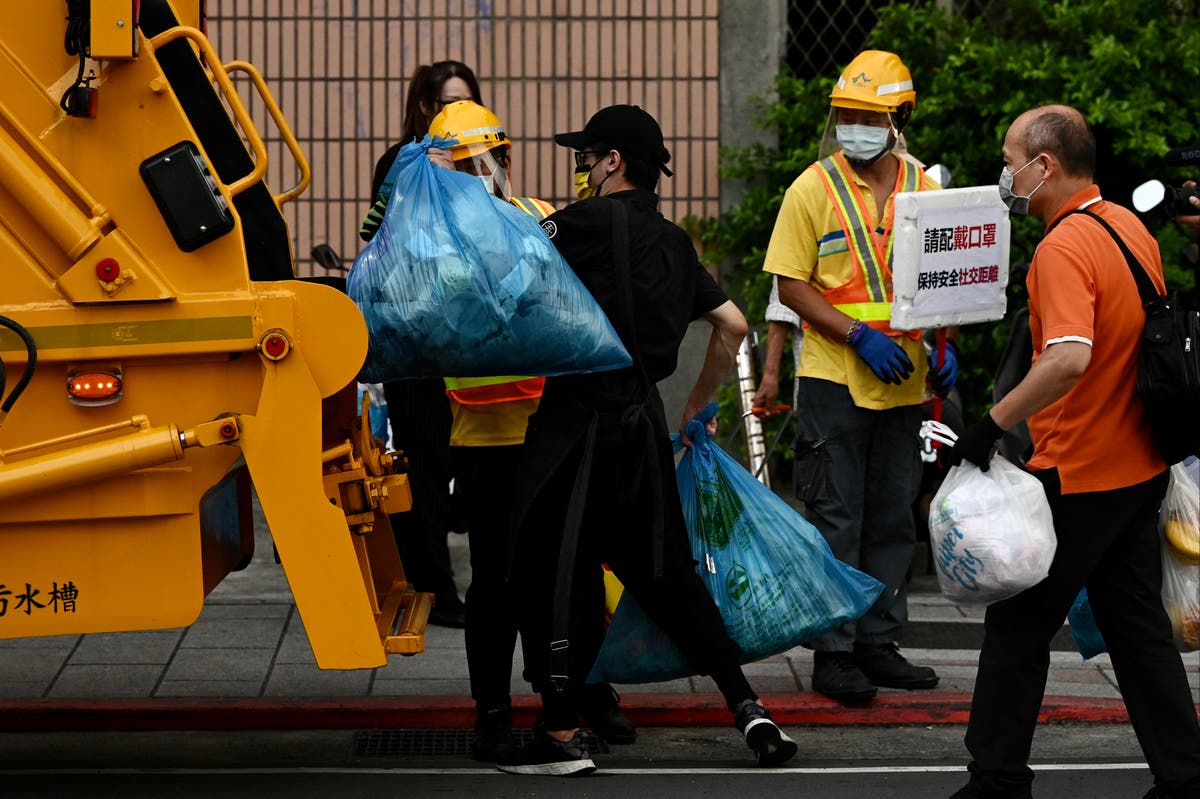 The canary-yellow refuse truck rumbles along the narrow street, past bubble tea shops and squat apartment buildings, blasting into the chilly night air a tinny rendition of Beethoven’s “Für Elise”.

To much of the world, the classical melody is the (too) ubiquitous song of youthful piano lessons and children’s toys. But for the residents of Taiwan, the jingle is a call to action, the start of a nightly ritual, a signal to tie up those plastic bags and come on downstairs: it’s rubbish collection time.

“I enjoy taking out the rubbish because it’s a chance to catch up with my friends,” says Kusmi, who is originally from Indonesia and now lives in Taipei, the island’s capital, where she works as a caregiver to the elderly.

The yellow truck – and a smaller white recycling truck behind it – heaves to a stop in front of a brightly lit convenience store in a middle-class residential neighbourhood in Xinyi district, Taipei’s financial centre.

A team of bin collectors hop down and begin setting out an array of cans, including separate receptacles for paper, plastic, glass, metal, raw food (for compost) and cooked food (for pig feed.)

For the next 20 minutes, what was a subdued street scene transforms into something akin to a neighbourhood block party as residents, old and young, converge on the truck from every direction. They come on foot, by bicycle and on scooters, lugging their presorted rubbish in carts and plastic bags. They wear jeans, store uniforms and sweatpants. Some bring their pets.

And yes, there are Crocs, those universal take-out-the-trash shoes.

“Sometimes I bring out the rubbish by myself, sometimes we come out together,” says Xiang Zhong, a high-school student who is there with a group of friends. The faint stink of garbage suffuses the air.

Waste collection systems vary around the world, but no place does it quite like Taiwan. Visit any city or rural town and five days a week, rain or shine, you’ll find people idling on the side of the road with bags at their side, waiting for the trucks.

Some pass the time looking at their phones. Others catch up on gossip. All have their ears open for those first bars of “Für Elise” or “Maiden’s Prayer”, a flowing piano melody by 19th-century Polish composer Tekla Badarzewska-Baranowska that is the other tune of choice for Taiwan’s refuse trucks.

It’s all part of a decades-old waste management policy in Taiwan under which “rubbish is not allowed to touch the ground”. Officials insist that forcing people to hand-deliver their refuse to the trucks — as opposed to wheeling out their bins for a later pickup or tossing the waste into a dumpster — has been essential to the transformation of a place once nicknamed “garbage island” into a clean, largely litter-free society.

“Through this system we can avoid rubbish piling up and keep our environment clean,” says Yang Chou-mou, an official at the environmental protection bureau in charge of sanitation work in Xinyi district.

The system has also fostered a sense of community in many neighbourhoods, helping strengthen the civil society that undergirds Taiwan’s vibrant democracy.

There are stories of couples who met while waiting in the queue for the rubbish pickup. In 2018, a candidate for Taiwan’s legislature in the city of Kaohsiung followed a truck so he could campaign at pickup sites.

Of course, there are still the anti-social types who just want to dump their rubbish and leave. And some who live in upmarket apartments have building management take care of their waste.

Concerns about the coronavirus have also meant people are more wary of interacting at pickup times. Still, people say just being able to see familiar faces — even if partly obscured by masks — has been a source of solace at a time when the pandemic has left many feeling isolated.

Glimpses of that humanity are on display on a recent winter evening in Taipei.

Kusmi, the caregiver, is pulled aside by a friend who hand her a gift of spaghetti in Tupperware and some oranges. Elsewhere, Lin Yu-wen bends over to help her neighbour and longtime friend, Yu Tzu-tsu, toss out a stack of old newspapers.

“We’re retired, we don’t have anything to do all day, so it’s nice to come out and see friends,” says Lin, a retired housekeeper.

Lin and Yu are old enough to recall the days when Taipei’s streets were strewn with litter and the island’s landfills overflowed. The situation became so dire, and residents so angry, that starting in the 1990s, the government initiated a waste-management overhaul.

In Taipei, residents were ordered to buy blue government-issued rubbish bags as part of a “Pay as You Throw” system, effectively creating a tax on producing rubbish as an incentive to throw out less.

Around the city, more than 4,000 refuse collection points were set up, and most public bins were removed to make illegal dumping harder. Fines were slapped on those caught littering.

The measures worked. In 2017, Taiwan had a household recycling rate of over 50%, second only to Germany, according to the environmental consulting company Eunomia. It is also among the world’s leaders in the least waste produced per person.

The role that the refuse trucks have played in Taiwan’s success shouldn’t be overlooked, says Nate Maynard, a Taipei-based expert in Taiwan’s waste management and host of the podcast Waste Not, Why Not.

“It forces you to come face to face with your own trash production,” Maynard says. “You have to deal with it, to carry it, whereas in a lot of other parts of the world, trash is something that just goes away.”

It remains a mystery how “Für Elise” and “Maiden’s Prayer” were chosen. Some say a health official chose the Beethoven song after overhearing his daughter playing it on the piano. Others say the trucks came preprogrammed with the melodies.

One thing is clear: the two jingles have become integral to the soundtrack of Taiwan, reliably drawing a crowd the way the Mister Softee jingle does elsewhere. When the southern city of Tainan dared to deviate by playing English language lessons over the loudspeakers, no one came out.

Despite what seems the effectiveness of Taiwan’s approach, not everyone is happy with the system.

Some have complained that the music is too loud. Others, like Charles Su, have expressed frustration about having to plan their lives around the rubbish collection times. Su says he occasionally has to come up with excuses to leave early from his biotechnology job so he can make it in time for the pickup.

“It feels like the schedule was set up for grandmas and grandpas who are home all day and have nothing to do,” Su says. “It’s pretty annoying.”

Officials, though, are adamant: the system is here to stay.

“There’s no way we can go back,” says Yang, the environmental protection official. “We need this system.”

Huang Yan-wen, a rubbish collector in Xinyi, has heard “Für Elise” played on a loop five days a week, nearly every week of the year, for the past 25 years. He insists he is not sick of the tune.

“I’m so used to it,” shrugs Huang, as he prepares to head out to make his evening rounds.

For others, the songs can trigger an almost Pavlovian response. Maynard, the waste expert, recalls walking in a park in London several years ago when he heard “Maiden’s Prayer” playing from a merry-go-round.

“I felt my blood rush,” he says, “and I wanted to grab my garbage bag.”

This article originally appeared in The New York Times.