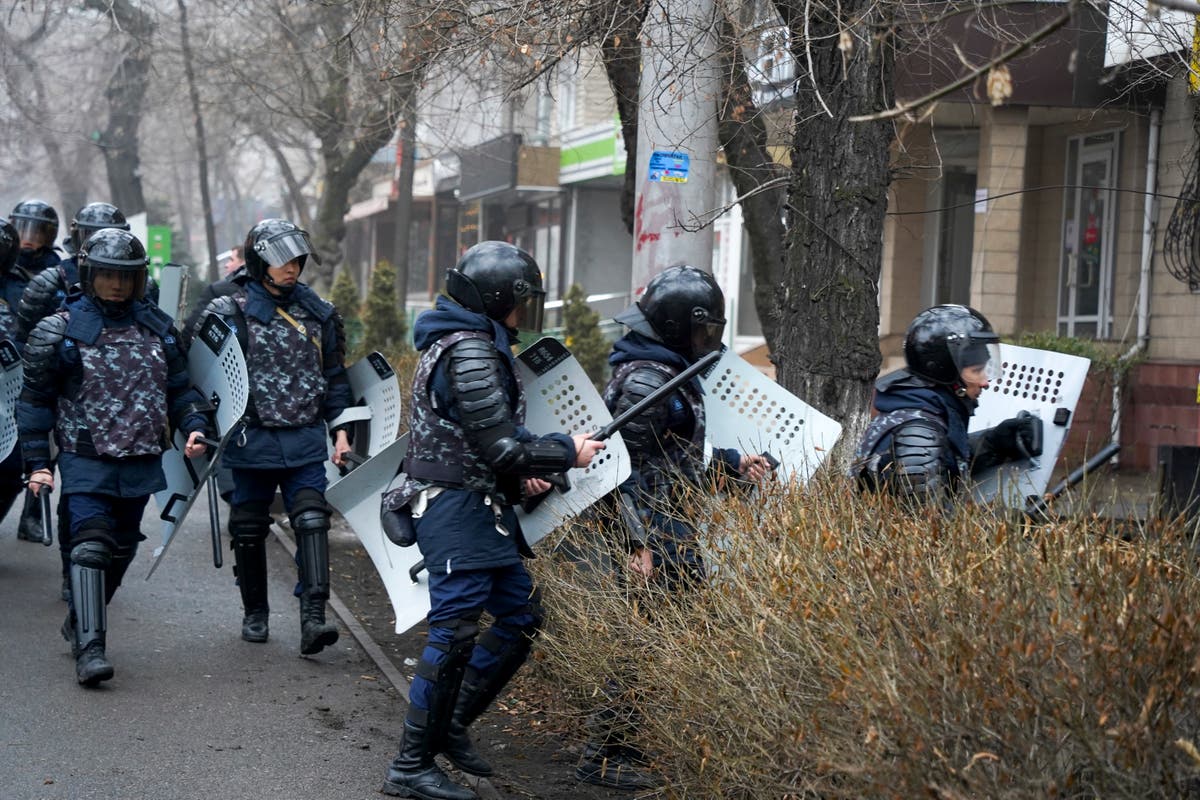 Twelve police officers and dozens of protesters have been killed in violent protests in Kazakhstan as Russian troops were sent to the country in a bid to stop the fighting.

Explosions and gunfire were heard in Almaty, the country’s largest city, on Thursday in another day of unrest. Government buildings were stormed and set ablaze as protests against soaring energy prices escalated.

One of the deceased officers was found beheaded in a deteriorating situation which poses a growing challenge to authoritarian rule in the Central Asian nation.

After breaking into the presidential residence and the mayor’s office in the country’s largest city Wednesday, demonstrators continued to try to storm more buildings overnight. Several dozen people are believed to be dead and many more injured.

Good afternoon and welcome to The Independent’s coverage of unrest in Kazakhstan.

We’ll bring you updates throughout the day as the Central Asia country is gripped by another day of violence.

Explainer: What’s behind the violent unrest?

Protests began on the weekend over anger at a spike in fuel prices but morphed into calls for reform, my colleagues Rory Sullivan and Alisha Rahaman Sarkar report.

Explosions and gunfire heard in Almaty as military vehicles move in

People on the ground in Almaty have heard gunfire and explosions near Almaty’s main square.

It is unclear at this stage if there have been any further casualties or deaths.

Military vehicles have been seen moving in as authorities attempt to quell the violence.

Kazakhstan’s foreign ministry denied a media report on Thursday that the entry of foreigners into the country had been suspended, the Sputnik news agency quoted it as saying.

Earlier, the RIA news agency had quoted the Kazakh embassy in Uzbekistan as saying that Kazakhstan had temporarily suspended entry for foreigners amid widespread protests.

Kazakhstan’s deadliest rebellion in 30 years of independence has forced a sharp change in rhetoric from the Central Asian country’s hand-picked president, a linguist who built his career on diplomacy rather than tough talking, Robin Paxton writes.

Russian paratroopers have arrived in Kazakhstan after the country’s president asked for help in controlling violent protests that initially erupted over fuel prices but grew into calls for wider political reform.

Moscow’s “peacekeeping forces” were sent to quell the unrest in the oil-rich country by the Collective Security Treaty Organisation (CSTO), a partnership between Russia and former Soviet states, including Armenia, Belarus and Kyrgyzstan.

My colleagues Lamiat Sabin and Rory Sullivan have the story:

China won’t get involved in Kazakhstan

“What is happening in Kazakhstan is the country’s internal affair (and) we believe that the Kazakh authorities can solve the issue properly,” he said.

Kassym-Jomart Tokayev, the Kazak president, has imposed a two-week state of emergency for the whole country, including an overnight curfew and a ban on religious services. That is a blow to Kazakhstan’s sizable Orthodox Christian population who observe Christmas on Friday.

Russia’s Sputnik news service also reported that shots were fired as police surrounded one group of about 200 protesters in the city.

So far, 2,000 people have been arrested, the Interior Ministry said.

The UK foreign secretary has said she condemns acts of violence in Kazakhstan.

Asked about Russian troops in Kazakhstan, Liz Truss said the country “has a sovereign choice on who it chooses as its allies”.

She added: “Any forces deployed must have a clear mission and act proportionately in any use of force to defend the legitimate security interests in Kazakhstan.”