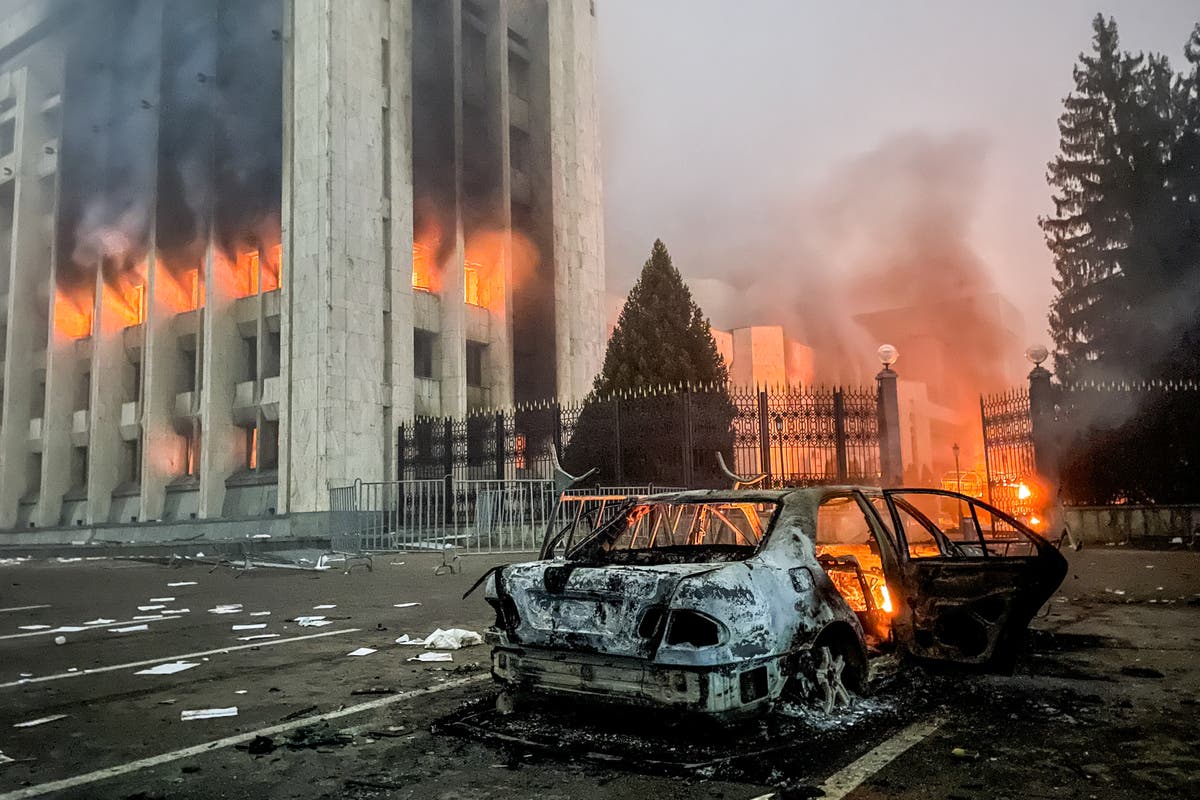 Kazakhstan plunged into chaos this week after protestors across the country took to the streets demanding a reduction in fuel prices.

The protests left at least eight people dead and hundreds of others injured after the presidential residence was engulfed in flames and armed protesters stormed government buildings.

Authorities in the energy-rich Central Asian country declared a nationwide state of emergency after failing to quell the most violent protest in decades.

President Kassym-Jomart Tokayev on Thursday said his country was under attack from “terrorists” as he appealed for help from the Russia-led military alliance. He sought help from the Russia-led Collective Security Treaty Organisation (CSTO), which includes five other former Soviet states, to fight against “terrorist groups” that according to him “received extensive training abroad”.

While the protest took off on Sunday in response to a steep rise in fuel prices, it became violent on Wednesday when the presidential palace and other government buildings were set ablaze.

Videos uploaded online appeared to show both the mayor’s office and the nearby prosecutor’s office on fire as well on Wednesday. The anti-government protesters had also seized control of the airport of Kazakhstan‘s biggest city Almaty on Wednesday, leading to the temporary cancellation of all flights to and from the airport.

The situation is most acute in Almaty, the capital Nur-Sultan and the western oil province of Mangistau, all of which are now under a state of emergency. The order was extended to the rest of the country on Wednesday evening, according to Russia’s RIA news agency.

The rallies, which are the largest to be held in the former Soviet republic in more than a decade, have now morphed into a protest against the political elite and a call for improved living standards for ordinary people.

In an attempt to soothe mounting public anger, the president accepted the resignation of the government on Wednesday and said he would reduce the cost of gas.

Meanwhile, Armenian prime minister Pashinyan said that an unspecified number of peacekeepers would go to Kazakhstan to stabilise the situation.

When and where did the violence start?

The first protests took place in Zhanaozen, a town in the western Mangistau region, on Sunday. However, it wasn’t until Tuesday that significant unrest bubbled up in different parts of the country, including in the key cities of Almaty and Nur-Sultan, the new capital named after Mr Nazarbayev.

Around 200 demonstrators had been detained during the disturbances, according to the interior ministry.

Although the police and security forces were able to contain protesters on Tuesday, the torching of buildings on Wednesday illustrates that the authorities are struggling to deal with the uproar.

It is difficult to get a complete picture of events because the internet was shut across Kazakhstan by Wednesday evening.

What are the protesters demanding?

Although protesters initially wanted the government to lower the price of liquefied petroleum gas after it had jumped by 100 per cent in a matter of days, things soon took a more overtly political tone.

Demonstrators in cities such as Shymkent and Aqtobe could be heard chanting slogans such as“Old Man, go away!” against the powerful former leader Nursultan Nazarbayev.

Much of the collective anger was directed towards the 81-year-old leader, who even though transferred the country’s responsibility to his successor, but remained the “real power in hand”.

Responding to such scenes, political analysts said young Kazakhs were fed up with their country’s lack of democracy and by an elite government that has held onto power since the dissolution of the USSR.

How have the authorities responded?

Security forces have tried to break up protests with tear gas and stun grenades, but, as the scenes in Almaty demonstrate, this has only had a limited effect.

Police reportedly fired stun grenades and tear gas at the crowd of demonstrators, some armed with batons and shields seized from police, but were unable to prevent them from entering the presidential residence.

“We intend to act with maximum severity regarding law-breakers,” President Tokayev said in a televised address Wednesday. He added that some police officers had died in the clashes, but did not detail how many.

Kazakh authorities declared a nationwide state of emergency late on Wednesday, shortly after Mr Tokayev removed his close ally Mr Nazarbayev, who held the presidency from 1991 to 2019, from his role governing the Security Council. He put himself in charge instead.

Meanwhile, the president also sacked Mr Nazarbayev’s nephew from his job as second-in-command at the country’s intelligence agency, in a bid to pacify the livid citizens.

What has been the international response?

Earlier on Wednesday, a Kremlin spokesperson said it would not tolerate foreign interference in Kazakhstan, a neighbouring country, saying it was playing close attention to the situation there.

Dmitry Rogozin, head of the Russian space agency Roscosmos was quoted by state media as saying security had been strengthened around key installations at the Baikonur Cosmodrome in Kazakhstan, which Russia uses for space launches.

Armenian prime minister Nikol Pashinyan announced on Facebook that peacekeepers from the Russian-led alliance will be sent to Kazakhstan for a limited period.

The White House has called for calm and said it is monitoring the situation.

The United Nations also called for all parties to “exercise restraint, refrain from violence and promote dialogue”.