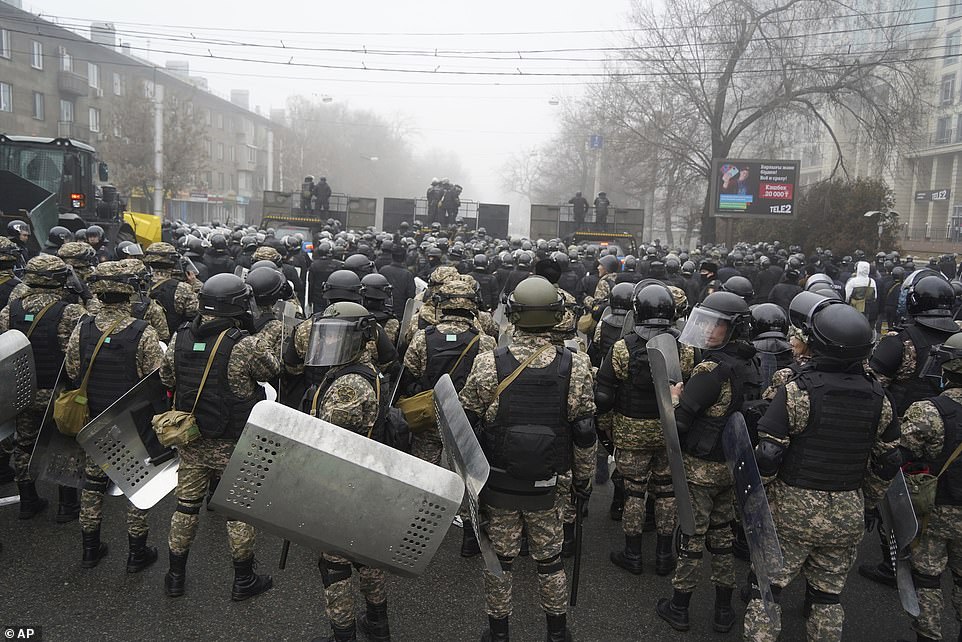 Thousands of Kazakh protesters armed with clubs and metal bars have stormed a mayor’s office as police hit back with stun grenades and tear gas amid unprecedented unrest over soaring gas prices.

Explosions were heard in Almaty, Kazakhstan’s biggest city, after demonstrators gathered at a square near the mayor’s building.

An Instagram live stream by a blogger showed a fire blazing in the office and gunshots could be heard nearby during the violent scenes.

Security forces failed to stop the protesters, some of whom were riding in a large truck through the city square

Protesters stormed the mayor’s office (pictured) in ex-Soviet Kazakhstan’s largest city Almaty on Wednesday as unprecedented protests over a hike in energy prices spun out of control.

An armoured personnel carrier is seen near the mayor’s office during protests triggered by fuel price increase in Almaty, Kazakhstan today

Security forces failed to stop the protesters, some of whom were riding in a large truck through the city square, from entering the administrative building.

The state of emergency was declared by President Kassym-Jomart Tokayev as he accepted the resignation of his government over the rising fuel costs.

The move includes an 11pm to 7am curfew, movement restrictions, and a ban on mass gatherings, according to documents published on the president’s website.

Kazakhstan is a tightly controlled country which cultivates an image of political stability, helping it attract hundreds of billions of dollars of foreign investment in its oil and metals industries over three decades of independence.

The protests began after the government lifted price controls on liquefied petroleum gas at the start of the year.

Many Kazakhs have converted their cars to run on LPG because of its low cost.

After the surge, petrol prices have now been lowered to 50 Kazakh tenge, equivalent to 8.5 pence, at half the market rate.

But this has failed to quell the rage against the government and the ongoing protests.

Speaking to acting cabinet members, Tokayev ordered them and provincial governors to reinstate price controls on LPG, and broaden them to gasoline, diesel and other ‘socially important’ consumer goods.

He also ordered the government to develop a personal bankruptcy law and consider freezing utilities’ prices and subsidising rent payments for poor families.

He said the situation was improving in protest-hit cities and towns, including Almaty and the surrounding province, where the authorities declared a state of emergency with a curfew and movement restrictions.

Nazarbayev, 81, a Soviet-era Communist Party boss, ran Kazakhstan for almost 30 years before resigning abruptly in 2019 and backing Tokayev as successor. Nazarbayev retains sweeping powers as the chairman of the security council; he has not convened the council or commented on this week’s violence.

Kazakh President Kassym-Jomart Tokayev has declared a two-week state of emergency in the Central Asian nation’s biggest city Almaty and in the western Mangistau province where protests turned violent, his office said early on Wednesday.

Police fired tear gas and stun grenades in a bid to break up an unprecedented thousands-strong march in Almaty, Kazakhstan’s largest city, after protests that began over fuel prices threatened to spiral out of control

A police car was set on fire on fire during clashes between protesters and law enforcement in the centre of Almaty, Kazakhstan, Wednesday, Jan. 5, 2022

The protests began in the oil-producing western province of Mangistau on Sunday, after LPG prices more than doubled following the lifting of caps.

A source familiar with the situation said some workers at Mangistaumunaigas, a Kazakh-Chinese oil-producing joint venture based in the Mangistau province, were on strike, although this was not affecting output so far.

Tokayev declared the emergency in Almaty and Mangistau and has said that domestic and foreign provocateurs were behind the violence.

Separately, the interior ministry said that in addition to Almaty, government buildings were attacked in the southern cities of Shymkent and Taraz overnight, with 95 police officers wounded in clashes. Police have detained more than 200 people.

Almaty mayor Bakytzhan Sagintayev said in an address to residents that the situation in the city was under control and security forces were detaining ‘provocateurs and extremists’.

Dollar-denominated bonds issued by Kazakhstan came under pressure as traders reacted to the unrest. The 2045 bond fell nearly 1 cent in early trade to 141.24 cents in the dollar, its lowest level in three months, Refinitiv data showed.