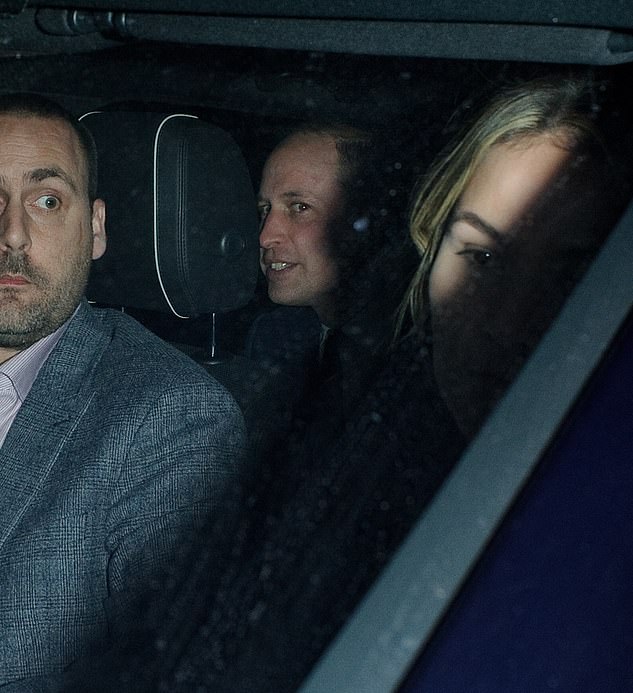 Prince William looked in good spirits as he enjoyed a night out at the star-studded Christmas party at private members’ club Oswald’s in London on Wednesday night.

The royal, 39, was pictured leaving the upscale VIP bash around 7:30pm, flashing a brief smile as he got into his chauffeur-driven car before making his way back to Kensington Palace.

William, who is rarely seen on a night out, joined royal pal James Blunt and his wife Emily, as well as Holly Valance and her billionaire husband Nick Candy as they enjoyed an evening at one of most exclusive of London’s private members’ clubs.

The club on Albemarle Street in Mayfair is famous among wine connoisseurs, and is owned by fellow environmental activist Robin Birley, whose father named his famous members’ club Annabel’s after his socialite wife – Lady Annabel Goldsmith.

William is also said to be a member of 61-year-old Etonian Birley’s secretive member’s only club 5 Hertford Street, boasting an annual fee of £1,800 and where members – rumoured to include Harry Styles, Margot Robbie, Mick Jagger and numerous royals – need to be recommended by a proposer and a seconder.

The royal’s celebrity friend James Blunt, whose wife Emily held a a party at their pub in Chelsea attended by Princesses Eugenie and Beatrice last week, was seen leaving later

William looked to have stuck to his favoured formal attire of a grey suit as he was spotted peering out from his car, appearing in high spirits despite his early exit.

The royal’s celebrity friend James Blunt, whose wife Emily held a a party at their pub in Chelsea attended by Princesses Eugenie and Beatrice last week, was seen leaving later.

The pair put on a glamorous display, with Emily turning heads in a satin suit and matching high heels as they left inconspicuous entrance of the club –  where guests can cellar their own wine.

Elsewhere Holly Valance looked stunning in a white mini dress as she stepped out with billionaire husband Nick Candy before they returned to their £10 million countryside mansion in the Cotswolds, after downsizing from their two-storey Hyde Park penthouse worth £175million.

The royal, 39, was pictured leaving the upscale VIP bash around 7:30pm, flashing a brief smile as he got into his chauffeur-driven car before making his way back to Kensington Palace

Oswald’s club is one of London’s most exclusive members’ only clubs, and they do not even have a social media account.

Oswald’s attracts the likes of Dame Joan Collins, Priti Patel, David Beckham, the Earl of Snowdon, and is where Amber Heard was seen partying during the High Court in Johnny Depp’s libel suit against a paper last year.

Meanwhile another one of Robin Birley’s clubs – 5HS in Mayfair – was said to be the location of Prince Harry and Meghan Markle’s first date.

In the summer of 2020 following lockdown, Birley, who is known as the ‘king of clubs’ spent millions of his own money to lure members back to his fashionable Mayfair nightspots.

The mogul gifted every member of 5 Hertford Street and Oswald’s a free meal up to the value of £500 – an offer which lasted until Christmas, with members allowed to bring as many guests as they like.

There are understood to be at least 3,000 members of the two clubs so it could have set Birley back more than £1.5 million.

Stylish: Minnie Driver also looked elegant as she attended the bash in a chic all-black ensemble and strappy stilettos

Based in a labyrinthine townhouse, it’s decorated like a bohemian stately home and members are charged fees of about £2,500 a year.

Among the countless famous faces to have visited are George and Amal Clooney and billionaire Bill Gates.

Robin Birley bears facial scars left by a tiger that attacked him at a family friends’ private zoo when he was just 12.

The businessman made headlines in 2019 after it was claimed that he funded Boris Johnson’s campaign to become prime minister.

Prince William’s appearance comes amid claims he was infuriated by a BBC Two documentary airing ‘unfounded’ claims that he and his staff briefed the media against Harry and Meghan.

The BBC reportedly refused to allow William as well as Buckingham Palace and Clarence House – the households of the Queen and the Prince of Wales – to view the two-part programme in advance, although the corporation did offer a ‘right of reply’.

The first episode of The Princes and The Press detailed media coverage of the young royals from 2012 to 2018 and how it was affected by what happened to their late mother.

It suggested there was ‘competitiveness’ between the different royal households and that, according to Omid Scobie, co-writer of the flattering Harry and Meghan biography, Finding Freedom, negative stories were deliberately leaked against Meghan to ‘put her in her place’.

The A-list crowd: Secretary of State for Health and Social Care Sajid Javid went to la Loma with his wife Laura king

Lawyer Jenny Afia speaking on The Princes And The Press documentary