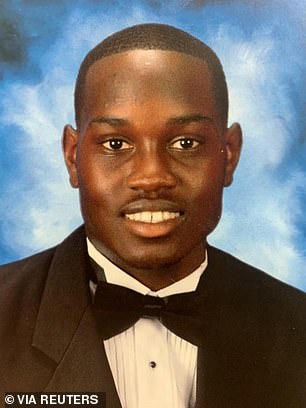 All three defendants in the Ahmaud Arbery trial were found guilty of murdering the black jogger in February 2020.

Gregory McMichael, the man who pursued Ahmaud Arbery with his son, has been convicted of murder.

The conviction carries a minimum sentence of life in prison. It is up to the judge to decide whether that comes with or without the possibility of parole.

He was found not guilty of malice murder and one count each of felony murder and aggravated assault.

The jury reached its decision after more than 10 hours of deliberations following a trial in which prosecutors argued that the defendants provoked a confrontation with Arbery and defense attorneys said their clients were acting in self-defense.

Father and son Gregory, 65, and Travis McMichael, 35, grabbed guns and jumped in a pickup truck to pursue the 25-year-old black jogger after seeing him running in the coastal suburb of Satilla Shores on Feb. 23, 2020.

Their neighbor William “Roddie” Bryan, 52, joined the pursuit in his own pickup and recorded cellphone video of Travis McMichael fatally shooting Arbery.

After being sworn in more than two weeks ago, the disproportionately white jury heard from more than two dozen witnesses – including gunman Travis McMichael, the only defendant to take the witness stand – and was presented with evidence photos, police body camera video, autopsy reports and more.

The McMichaels told police they suspected Arbery was a fleeing burglar when they armed themselves and jumped in a pickup truck to chase him.

Gregory McMichael was found guilty of felony murder, aggravated assault, false imprisonment and criminal attempt to commit a felony. He was found not guilty of malice murder

Bryan joined the pursuit when they passed his house and recorded cellphone video of Travis McMichael blasting Arbery at close range with a shotgun as Arbery threw punches and grabbed for the weapon.

During the trial, the prosecution aimed to prove the defendants wrongly assumed the worst about Arbery and sought to rebut arguments that they were attempting a valid citizen’s arrest, which required that someone have ‘reasonable and probable’ suspicion that a person is fleeing a serious crime they committed.

‘They made their decision to attack Ahmaud Arbery in their driveways because he was a black man running down the street,’ Prosecutor Linda Dunikoski said during her closing arguments.

They killed him ‘not because he’s a threat to them, but because he wouldn’t stop and talk to them,’ she alleged.

The state claimed there was no evidence Arbery had committed crimes in the defendants’ neighborhood.

Defense attorneys contend the McMichaels were attempting a legal citizen´s arrest when they set off after Arbery, seeking to detain and question him as a suspected burglar after he was seen running from a nearby home under construction.

Defense attorney, Jason Sheffield, said his client had ‘reasonable and probable grounds of suspicion’ to follow the 25-year-old in his truck because he believed he was a burglar.

He added that although Arbery was not armed with a weapon, Travis McMichael said he had reached into his shirt as if for a weapon, and he was also armed with his fists.

The above map shows Ahmaud Arbery’s approximate path and locations of the events that occurred on February 23, 2020

In the video recorded by Bryan, Arbery can be seen trying to wrestle a shotgun from Travis McMichael’s hands

‘Travis felt something is not right…Aggravated assault is a felony that can be committed by the use of fists. Fists are a weapon. And right now as Ahmaud Arbery is running towards Travis McMichael he could have a gun and he definitely has fists,’ Sheffield said.

On a 911 call the jury reviewed on day two of deliberations, Gregory McMichael told an operator: ‘I’m out here in Satilla Shores. There’s a Black male running down the street.’

He then starts shouting, apparently as Arbery is running toward the McMichael’s idling truck with Bryan’s truck coming up behind him: ‘Stop right there! Damn it, stop! Travis!’

Gunshots can be heard a few second later.

Arbery’s killing became part of a larger national reckoning on racial injustice after the graphic video of his death leaked online two months later and the Georgia Bureau of Investigation took over the case, quickly arresting the three men. Each of them is charged with murder and other crimes.

The 25-year-old had enrolled at a technical college and was preparing at the time to study to become an electrician like his uncles.

‘You see the defense lawyer talk about his long legs and his dirty toenails almost as if he’s like a runaway slave and that they are chasing him,’ said Crump, who is representing Arbery’s father, Marcus Arbery, in civil proceedings.

‘They capture him and then they kill him. And the only question that remains is, is this jury going to give us a Jim Crow verdict? Or are they going to say in 2021 America we must be better than this?’

Crump, who has previously represented the families of George Floyd and Michael Brown, said Arbery did nothing to provoke Gregory McMichael, 65, his gunman son Travis McMichael, 35, and their neighbor William ‘Roddy’ Brian, 52, before the fatal chase in February last year.

Cooper-Jones uttered a few brief words as she left the court with her legal team just after midday to take a lunch break. She told a well-wisher: ‘I’m doing good’.

Asked how her heart was, the anguished mom simply added: ‘Heavy’.

Demonstrators have assembled outside the court, demanding justice for the slain 25-year-old

‘It harkens back to a Jim Crow-era type killing,’ Crump added. ‘You have a young black man who is minding his business and then ordinary white citizens suspect that they believe he’s done something criminal.

‘And instead of calling the police, instead of giving him his due process, they go out and they take the law into their own hands.’

Crump likened 25-year-old Arbery’s alleged ‘lynching’ to the killing of Trayvon Martin but he said that video evidence here should ensure the trio cannot successfully claim self-defense as George Zimmerman did in 2012.

‘We have a visual of everything that happened as he [Arbery] ran for his life. And I think that sets us apart because we literally see a young black man get lynched in broad daylight and 2020,’ Crump added.

‘If America can condone this, then all parents who have children of color, we can’t protect them and we can’t depend on the law to hold people accountable.