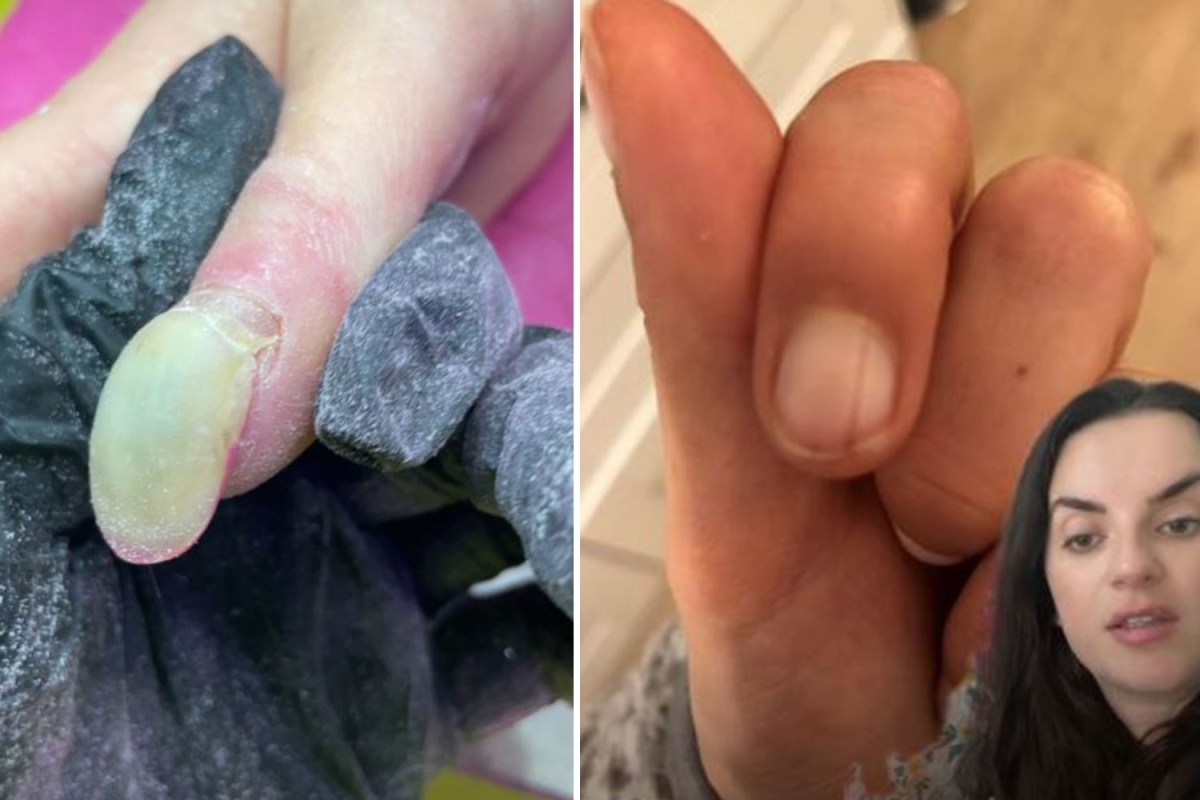 A NAIL technician has revealed that your nails could reveal whether you’ve got underlying health conditions – and two of her clients found out they had tumours, all because of their nails.

Nail technician Megan shared six different things to look out for on your nails and each thing could indicate a different health condition you didn’t know you had.

Megan said that thin, dark lines coming from the root of the nail to the tip could indicate broken blood vessels, psoriasis, or even melanoma.

In a recent video, she said: “We posted a photo on our salon instagram of all the different signs on your nails and what they mean.

“One of our clients was prompted to go and see her GP and came back to us.

“She had a line, a dark line, coming from the roots of her nail down to the tip and it basically cracked a little bit at the end and never grew completely right.”

The client discovered that she did, in fact, have to have the nail removed for testing purposes.

Megan explained: “She had to have her nail removed, two cuts done down the side, and then a tumour was taken out from the base of her nail to be tested.

“So, the brown line was a sign of possible melanoma.”

She specified, however, that lines like these aren’t always dangerous.

She said: “You can get lines similar to this if you have dark skin, so don’t immediately panic and think there’s something more serious going on. It can be due to the pigment in your skin.”

Sun Doctor Carol Cooper added: “Trauma to the finger, for example shutting it in a door, often causes a bleed beneath the nail.

“A dark area beneath one nail can be melanoma, especially when there has been no trauma.”

Clubbed nails occur when the tips of the fingers enlarge and the nails curve around the fingertips.

Nail clubbing is sometimes a sign of low oxygen levels in the blood, which could indicate a variety of lung problems.

Megan recently advised one of her clients to go to the GP and get herself checked out for lung problems, as it appeared her nails had become clubbed.

She said: “She was advised to see her GP, which she is going to go ahead with.”

Doctor Cooper said, in this particular case, it’s hard to tell if the nails are really clubbed as they’ve been so damaged by the false nails.

She explained: “In clubbing, the nails are curved downwards as well as wider, and the whole fingertip often looks larger and stumpier.

“Clubbing occurs in many conditions where there’s lack of oxygen in the body, such as congenital heart disease and longstanding lung disease including cystic fibrosis and lung abscess or lung cancer.

“It can also occur in cirrhosis of the liver and sometimes with Hodgkin’s lymphoma.”

She added, however, that clubbed nails are only really a serious problem when accompanied by other symptoms, including a cough, weight loss, or shortness of breath.

But if you have these lines across more than one nail, Healthline states that “the cause is likely a systemic illness”.

They could indicate kidney problems, thyroid problems, or even mumps.

Doctor Cooper added: “in fact, any severe illness or severe stress can cause a deep horizontal line that eventually grows out.”

For more, check out this nail technician who says we’ve been washing our hands all wrong – but her technique “looks painful”.

Meanwhile, a woman has praised £199 clip-on veneers for transforming her smile after she was rejected from jobs over her “tombstone teeth”.

Also, from £100k smiles to VERY expensive veneers – can you name the celeb behind these pricey pearly whites?

I’m a nail tech and these are some of the worst nails I’ve ever seen, they’re green and lifting & even I don’t understand how they’re so awful